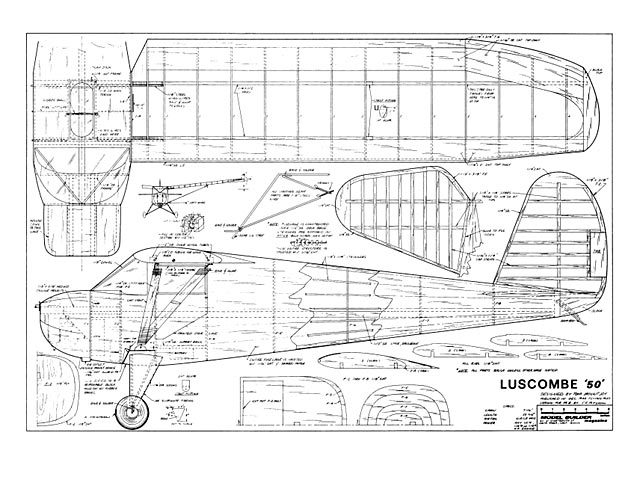 Luscombe 50. Scale gas free flight by Tom Mountjoy from December 1940 Flying Aces, this is a later reprint in MB.

Our OT model for this month is kinda special, in that we're not only featuring a design that is 37 years old, we're also featuring the airplane itself - at least major portions of it.

The model, very close to scale even by today's standards, had already made a name for itself in many East Coast contests before it was published in the December 1940 issue of Flying Aces. It probably had about the best combination of scale fidelity and flying ability of its period.

Torn became interested in R/C about two years ago, after laying off of model building since shortly after World War II. John Pond's 'Plug Sparks' column convinced Tom that he should drag the basket case Luscombe out of the attic and resurrect it.

Originally, the Luscombe was powered by an inverted Brown, but Tom removed it (says it still runs like a Swiss watch), and installed an HB 61, which is a little too much power for the plane, though it's span is almost 8 feet. Other modernizations include a Hobbypoxy Silver finish, DJ striping, Sig balsa to fill in for the missing or deteriorated structure, Du-Bro wheels, and a Kraft radio. As Tom says, the experience of bringing the old Luscombe back to life was very similar to finding a real antique airplane in somebody's barn and restoring it to flying condition.

The most unique thing about this model is that it is eminently suitable for old timer F/F scale, OT Cabin, Radio Assist and F/F Texaco, R/C Limited Engine Run, and not least of all, modern R/C Sport Scale. The model's fidelity to scale should be top level, as Tom was employed as an inspector at the Luscombe factory when he designed and built it!

As with any old timer which is being built in our modern age, new materials and construction techniques will be cause for modification. Also, if built for RIG, the additional weight and flight stresses will necessitate general beefing up of certain parts of the structure. As usual, we can't anticipate each modeler's thoughts on modifying, so the plans are presented exactly as originally published.

With all that's going for it, the Luscombe 50 will probably be around for another 37 years!"

Update 04/01/2013: uploaded a clearer version of this plan, thanks to theshadow. 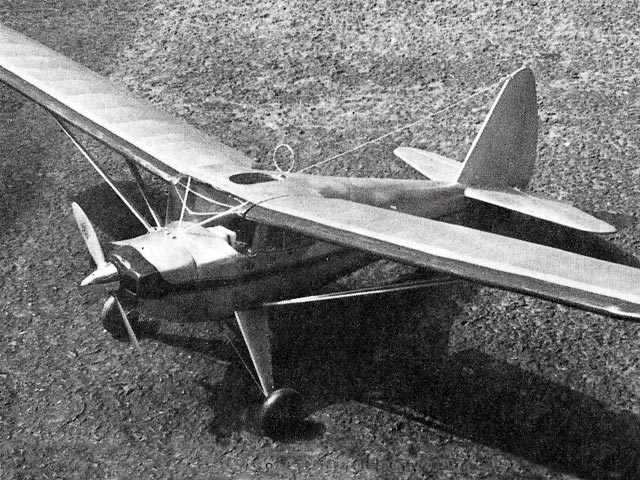