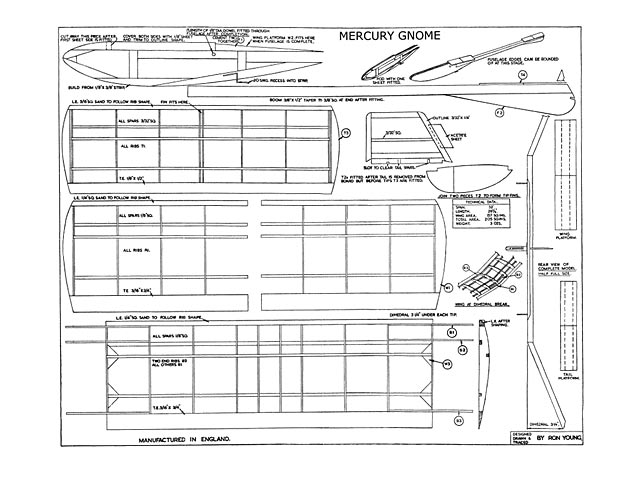 Quote: "32 in span pod and boom glider. A really tough little model that flies like a bird, in fact the only complaint we normally get about this one is that it flies away and gets lost. A natural follow up to the Magpie (oz4410)."

Packaging: The contents were comfortably enclosed in a sturdy cardboard box attractively printed in red, yellow and black, with a large photographic illustration of the model itself, for the benefit of prospective buyers. Quality of Contents was first-rate.

Completeness: This is, of course, a 'dry'" kit, so that no cement or dope is included, but is absolutely complete otherwise. We found no deficiencies, there being ample wood, etc, for the job.

Ease of Assembly: The usual clear and well-drawn Mercury plan, plus separate printed building in-structions, made construction as simple as could be wished. The beginner, for whom this kit is primarily intended, should experience no difficulty. Wing ribs, dihedral keepers, etc., are all on printed sheet. We particularly admired the sturdy construction of this model, which is capable of taking drastic punishment. Reviewer's small son aged six has repeatedly 'pulled the model in' on a hundred feet of line without so much as splitting tissue. It took two evenings' building time for an experienced modeller from opening the box to final doping. The average tyro should be able to start building on a Monday, with the model all ready Friday night.

Flying: Very little trimming was necessary on the review model, just 1/64th under the leading edge of the tailplane. Model had a natural left-hand turn and was simple to handle on the towline. Third tow launch from only 50 feet of line resulted in an OOS flight, and subsequent fly-aways were numerous. In fact, our only criticism is the omission of advice regarding a dethermaliser. This can very easily be accommodated by attaching the rubber band holding down the tail to the rear fuselage slot by means of a loop of cotton. Thread your fuse through the loop and the job is done. Another addition we would suggest for those intending the model for contest work is the fitting of an extra tow hook 3/8 in behind the one shown on the plan. This for calm weather towing; our old legs became a little weary from having to run so hard!

Value: at 7/4 including PT is very good. For this the beginner gets a simple to build, easy to fly glider, capable of contest performance." 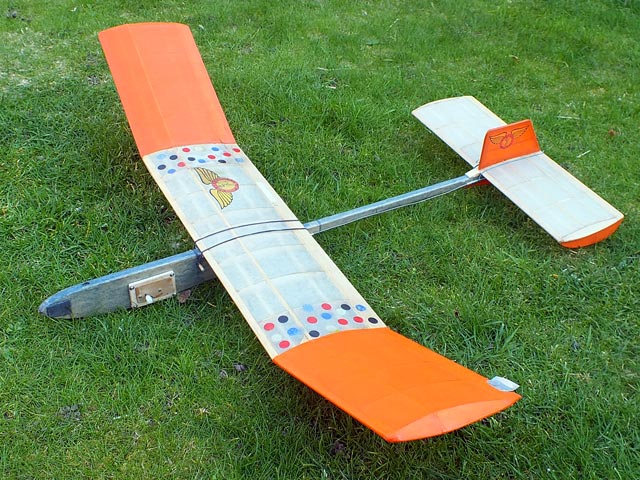