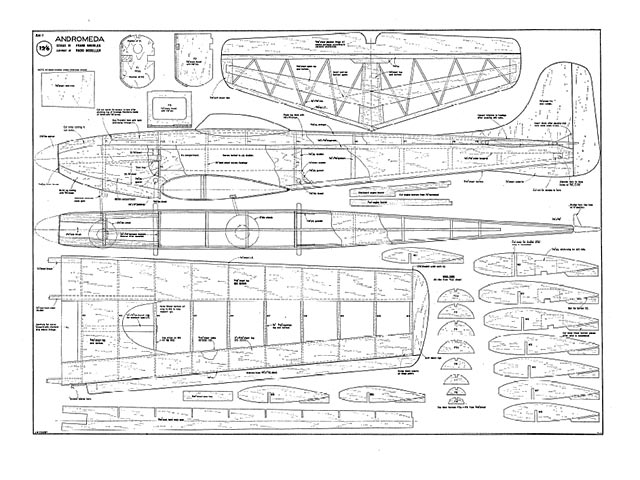 Quote: "Andromeda is a multi-channel acrobatic model, with a layout which is suitable for either reed or proportional gear, having been flown with both. The original first flew in November 1964, powered by a Merco 61 and controlled with F&M reed equipment and Bonner servos. The model weighed in at 6 lb 6oz, and the Merco had plenty of power to take her through square loops, square bunts and even horizontal square eights.

Andromeda showed great promise for competition work, so in March 1965 I proceeded to Great Saling for the first competition of the season. In the scramble to get in a test flight, however, I forgot to carry out a check on the equipment at take-off. Andromeda took off beautifully, made a smooth turn to the left - and continued tuning, right back into the ground about 150 yards downwind. All without receiving a single signal from me! Of course I immediately demanded to know whose transmitter was switched on, only to make the dismal discovery that my own was switched firmly off! So, be warned: no matter how much flying experience you have, go through your cockpit drill.

The damage, however, was not so bad as it at first appeared; the wings, in fact, were hardly damaged at all. Repairs were quickly carried out and Andromeda was very soon flying again. This time I installed a set of C&L Servomites which gave very good service for the rest of my career with reed equipment. The model flew with this setup to place second at the 1965 British Nationals.

Shortly after the Nationals, I obtained F&M Digital 5 proportional gear, with which I have flown this model ever since. The only modification I have carried out since this time is the addition of the small underfin. There was a slight tendency for the tail to waggle in turbulent air, so I experimented with a thick fin but found little improvement. The underfin, however, made all the difference.

At the time of writing, Andromeda is still flying well, although the weight is now in the region of 7 lb - due, no doubt, to the amount of oil that has worked its way into the airframe. I feel that the model will perform well, therefore, with the weight anywhere between 6-1/4 and 7-1/2 lb.

Building the Model. Fuselage. Cut out the engine bearers exactly to the drawing noting the differing shapes of right and left-hand pieces. Next make the tank tray from 1/8in sheet balsa. Working over the plan, cement the bearers to the tank tray and add 1/8 x 1/2in cross members between the bearers. These can be removed after assembly..."

Quote: "Steve, Here is a scan of Andromeda, a radio controlled aerobatic model, from the very first edition of Radio Modeller, January 1966, with article. Neither plan nor article give a wingspan, but I have calculated it as 69-1/2 inches from the 3 inch wheel." 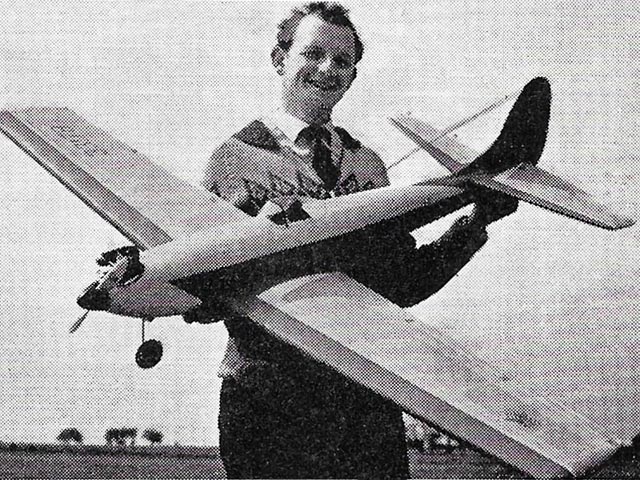