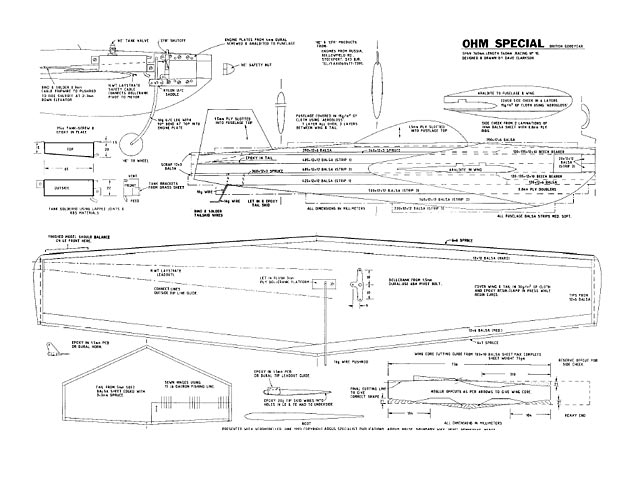 Quote: "Dave Clarkson offers you the chance to become a winner using his proven
British Goodyear desgn. The Ohm special.

Introduction. In numerical terms British Goodyear is the most popular class of CL Racing in this country, often entries at contests are twice that of any other class. It is also the easiest way to go CL Racing because of the low tech and standard parts requirement enforced by the rules. Its final attraction is that for many years now it has seen the closest results and most record breaking of all of the classes. These attractions have become apparent in other countries too and so our rules sometimes incorporating local variations, particularly with regard to eligible motors, have been widely adopted. I would guess that more people have come into CL Racing via British Goodyear than by any other means. It is a fine event and I recommend it to you all.

Particularly pleasing to me is the fact that the vast majority of model designs in use today for British Goodyear have been published under my name in this magazine. So why a new one when the existing ones, like the 'Ol Blue' and the 'Mr D' have proved over the years to be entirely satisfactory? Well I guess that the words 'over the years' give a clue. Last year, when it became obvious that my last Ol Blue model was badly in need of replacement, I decided that I was totally bored with that design and that my last Ol Blue would indeed be my last Ol Blue. But what to build instead, for the APS Ol Blue had proved for me to be perfect in terms of ease of construction and effectiveness in use.

To the rescue came Tom Millar for he lent me his extensive stock of Goodyear 3 views published by RS Hirsch, the acknowledged expert in this subject. In all Tom loaned me almost 40 different 3 views, what a hoard and what a treasure house. i searched through this pile looking for a design like the Ol Blue but not the same and found the Ohm Special, it had a fuselage similar to the Ol Blue and a wing similar to the Mr D, it looked just the job.

So I built one for the 1992 Nationals, as did club mate Rick Haughton, and it attracted a lot of interest. We had no success there with them for they were too new and still had things in need of sorting. At the October 1992 Centralised these little failings had been corrected and we both qualified for the final with the fastest heat times of the contest and I, with my team mate Ed Needham, won the final in the fastest Final time recorded in 1992.

Selecting materials. Any of you who have built one of my previous Goodyear model designs will not need any guidance in this department for the same old methods are used for this one. In selecting your wood do search hard for straight and straight grained, light but firm lengths of 12 x 12 mm balsa stripwood for the fuselage and a piece of straight grained 10 x 100mm balsa weighing no more than 80 gm for the wing..."

Article pages, text and pics, thanks to Fernando. 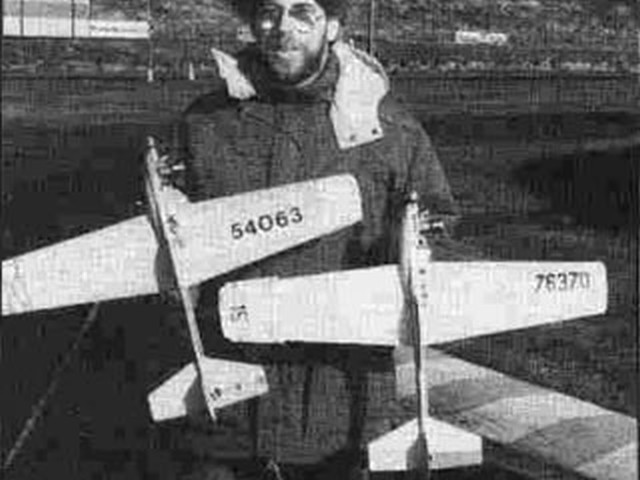 The plan is missing detail of horizontal stab on fuselage side view. Aft part is visible but forward leading edge is missing. Can we safely assume that we can extrapolate from what details is already there? I wouldn't like to get tail plane position incorrect.
DanCasey - 21/09/2016
Add a comment