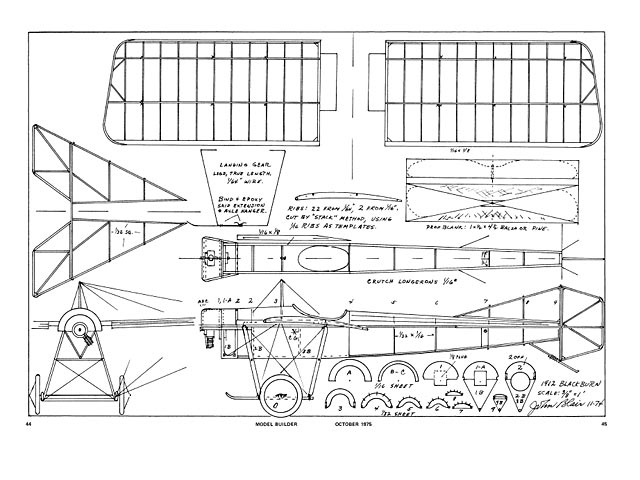 Not many pioneer aircraft make suitable peanut subjects - their awkward moments, 'sparrow strainer' rigging, and multiple odd surfaces present some real challenges! The sturdy, graceful 1912 Blackburn, however, is a most happy exception. It is a 'natural'; a clean, nicely proportioned plane that trims easily and flies beautifully.

England's famed Shuttleworth Trust maintains a Blackburn in flying condition, so photographs and magazine articles are available to aid the modeler. One good example of such an article is in the February, 1974, issue of the English magazine, 'Scale Models.' The photos accompanying the article are especially useful in figuring out the rigging pattern.

The first step in building the Blackburn will be to prepare some odd-sized wood. A balsa stripper is needed, but not absolutely necessary. An accurate straight edge and a sharp modeling knife (uber Skiver, of course!) can do the job with a little care. First, cut some 1/32 x 1/16 strip for wing spars and fuselage cross-braces. This stock can also be used for tail surfaces, unless you trust yourself to work with 1/32 sq. Some 1/32 x 1/8 will be needed to fair the landing gear legs. Strips of 1/32 x 1/16 basswood are needed for laminating the wing tips. If desired, the tail surface outlines may be 1/32 sq. basswood. Finally, sand some 1/32 sheet down to 1/64, for wing ribs and fuselage decking.

The fuselage presents the only real construction problem, so let's start with it. First, cut out all fuselage and cowling formers. Because of its odd cross section, the fuselage is built crutch fashion. Pin down 1/16 sq. longerons over the top view, including the short 'ears' at the nose, which will support the oddly shaped cowling. Glue the 1/16 x 1/8 landing gear and wing mount support pieces on top of the longerons, and install the top halves of formers 1-A through 9. Two formers '2' are required. Fit the top decking in place next, between formers 2 and 4. The slight taper in the deck area will require two pieces for proper fit. The l/32 x 1/16 turtle deck stringers may be added next, and the assembly allowed to dry before removing from the board.

This brings us to the engine cowling, which is tricky. Glue 1 /32 x 1/16 uprights under the front former 2, and add the tiny gussets to form the exposed engine mount. After gluing the 1/8 plug to former 1, install the 1/16 brass tube shaft bearing and put former 1 in place on former 1-A. Glue former 1 lightly to the crutch ears only, as it must be cut away later.

Glue cowling formers A, B, and C together and notch into place at the front of the crutch. Note that the cowling extends 3/32 below the crutch. The cowling, from former A to former 2, will have to be planked with small pieces of 1/32 sheet, because of its compound shape. After final sanding, the cowling is carefully cut loose between formers 1 and 1-A. Granted, this is a complicated way to get a removable nose unit, but the odd shapes involved don't allow much choice.

The seven-cylinder, 50 hp. Gnome Monosoupape rotary is made from thread-wrapped 1/8 round (cylinders) and a scrap balsa crankcase. Pushrods are bent pins or scrap wire. A l/16 brass tube is used for the shaft bearing. The engine is not pinned to the prop, but allowed to rotate freely. This way, it adds no load to the rubber motor.

The land ing gear promises to be a bear, but it's really not. Take it in sequence, and it goes right together. First, bend two main leg units (plan shows true length). The skid extensions and axle hangers are bound in place with fine soft wire and epoxied or soldered. The wooden skids are shaped, grooved, and glued over the wire. The four legs can now be faired with grooved 1/32 x 1/8 strips, sanded streamline. Leg units are cemented into notched fuselage sides, and 1/16 round basswood spreader bars added to complete the landing gear structure. Scale type shock action is provided by securing the 1/32 wire axle in the hangers with a short length of rubber band. Wheels are shaped from balsa disks and bushed with 1/16 tube. For an authentic pioneer touch, tires should be the off-white color of natural latex. Black rubber tires were not used in 1912.

Tail surfaces are built directly over the plan. The outlines may be 1/32 sq. basswood, with 1/32 sq. balsa for the remainder. These are very delicate structures. It will be best to shrink and dope some tissue on a separate frame, and then transfer the prepared covering to the tail units. The original airplane sported a single-surfaced tail, which simplifies things considerably.

Covering is superfine tissue, applied with thinned white glue. The engine, cowling and sheeted portions of the fuselage are dull aluminum. Fabric panels were clear varnished, unbleached cotton, which gave a translucent amber color. Experiment with a few drops of brown dope in some clear to give a slight tint of color to your model.

Numerals and insignia are easy - there are none. Some brown trim around the cockpit rim is the only color decoration needed.

Rigging points are indicated, but some good photos are needed to keep the diagram straight. The magazine article already referred to is very good. Steel gray polyester sewing thread makes very good cable. Before gluing the rigging permanently, make sure that each wing panel has 1/16 washout. My Blackburn sports a hand-carved pine prop, but you can use a plastic one if you prefer. If you have held the weight below 0.5 oz., your Blackburn should fly on a loop of 1/16 rubber. If 1/8 rubber must be used, try a long (12 inch) loop, to cut down on power and gain endurance. My model, when balanced as shown, flies with no thrust off-set and just a British 'tweak' of up elevator." 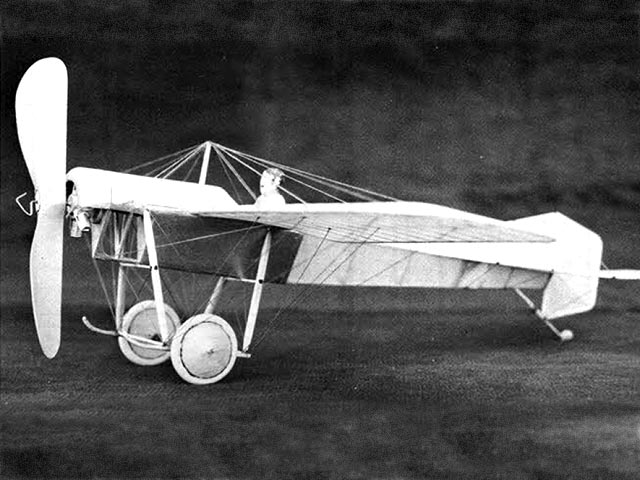