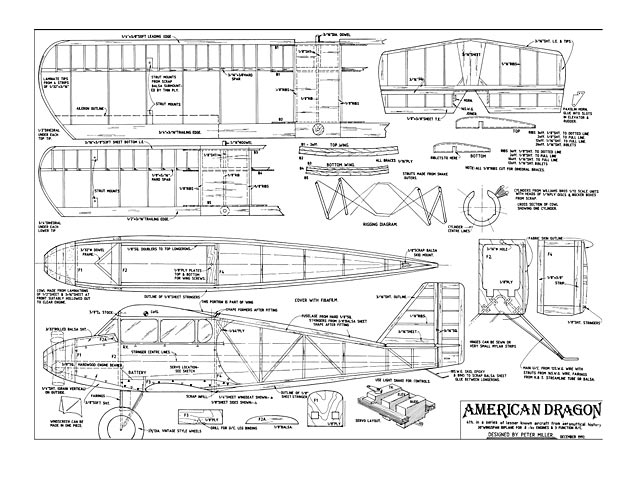 Quote: "The model is based on drawings of the original aircraft which now hangs from the ceiling of the Longhorn Club in Scorpion Sting, Arizona. The rope ladder still hangs down from the hatch and every Saturday night a striptease artist performs her act on this for the assembled patrons. I chose the PAW 80 Classic engine to power the model and this is adequate if an 8 x 4 prop is used. A 1 cc engine would provide sparkling performance and is advised if the weight exceeds that of the prototype which weighed 1lb 3 ounces with Fleet micro radio and a 150 mAh nicad. The controls are rudder, elevator and throttle. Ailerons could be added to the top wing which would make the model quite aerobatic with the larger size of engine.

Construction of the model is very simple; anyone who can build a vintage model can build American Dragon so I shall concentrate on the areas which differ from the average model - such things as the front end, the cowling and dummy engine, the undercarriage and the struts and rigging.

Fuselage. The fuselage is the standard two sides joined by formers. Pulling the nose in to meet F-1 needs some care if the former is to be accurately fitted at right angles to the centreline in both planes. The 1/4 sheet on the outside of the sides between F-1 and F-2 is very soft and the grain is vertical to allow the wood to bend to fit the sides. Contact adhesive is used for this; roughly shaping the material also helps it to bend.

The cowl is made from laminations of 1/2 in sheet plus two laminations of 3/16 at the front, it is hollowed out to fit closely round the engine and the bearers. Two pieces of dowel, 1/4 or 5/16ths, are inserted in the sides to take the screws which hold the cowl to the hearers.

The cylinders are Williams Bros 1/12 scale units, the heads are made from a disc of 1/16 ply with the rockerboxes glued on. Aluminium tubes are used for the pushrod covers. The exhaust stacks are made from the gold coloured outers of Kavan snakes, or are they Graupner?

The main landing gear is bound to the former with copper wire and soldered. Use wire about the size of 30amp fuse wire, not the really fine stuff. The other struts are soldered on after covering. The streamlining was done with small pieces of K&S streamlined ali tube which is slid onto the wire then soft balsa is rammed into the tubes and cyano run down inside the strut This works fine but the old way of fairing with balsa will work just as well.

The aluminium skinning was done, after covering, with some old stocks of self-adhesive aluminium that I had. Cooking foil stuck down with contact adhesive would also work but the easiest material to use would be aluminium or chrome Fibafilm but I am not sure if you could do the engine turning effect on this material.

The engine turning is done with a small pad of servo tape stuck to a large headed 'clout nail' with small discs of 'Wet and Dry' paper stuck on. This assembly is used on a mini drill. Use oil to lubricate the disc when doing the turning..." 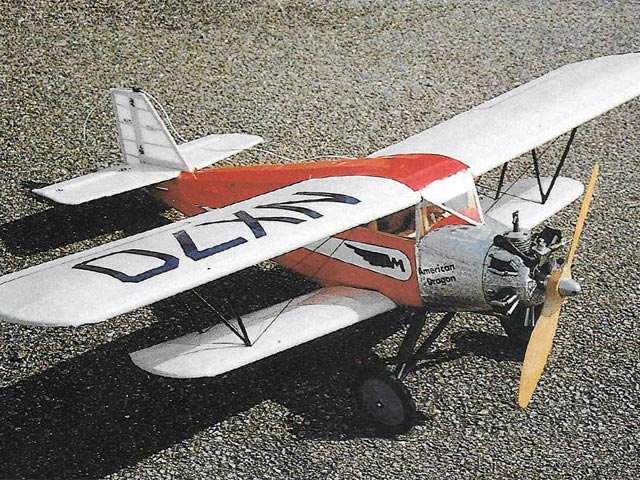 Hi Steve, AMA plans service listing says this is from 'Radio Modeler' Dec. 1992. I've attached a picture from the first page of the article, which I think was downloaded from a certain eBay vendor who files off the serial numbers before posting anything. Article has lots of silly stuff about this airplane's alleged designer: 'Skunk Magee'. I think this would make a great rubber model. Might be possible to get away with using it in FAC mass launch, depending on the credulity of the judge(s). I'm surprised it didn't appear in the April issue. Or is April Fool's day an American custom only??
Lincoln - 07/10/2014
I did a lot of the series, they came out in any month under the series title "Lesser Known Aircraft From Aeronuttycal History". Skunk Magee is copyright and featured in several of the series.
DustyMiller - 17/01/2016
Add a comment