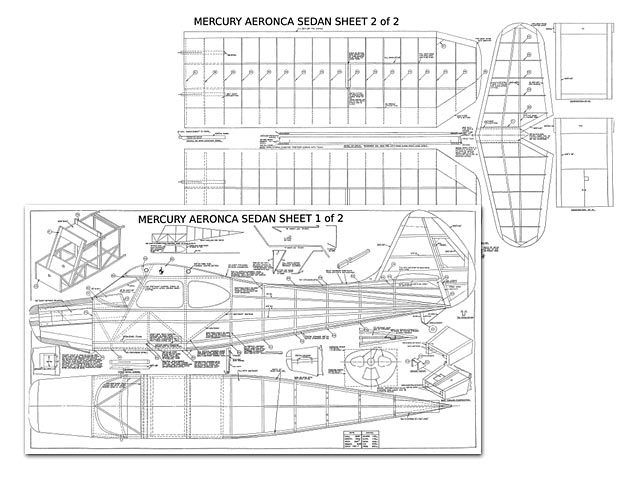 Quote: "BUILDING THE AERONCA SEDAN. The MERCURY AERONCA SEDAN model is a faithful reproduction of the prototype aircraft being true to scale in all essential dimensions. The scale is 1-3/4 in to the foot.

The original aircraft is a four seater light cabin monoplane with a rigidly-braced high wing of single spar construction and metal covering. Gross wing area is 200 sq ft. The fuselage is fabric covered and has a welded steel tube framework. The power plant is a 145 hp Continental 0145 six-cylinder horizontally opposed air cooled motor with a fuel tank in each wing. Fuel capacity is 40 US gallons.

The AERONCA SEDAN was chosen for Mercury's second free-flight model in the larger range for several reasons. Its dimensions are such that it makes a really stable model suitable for either free-flight or radio control with true-scale wing, tail and fin areas and scale moment arm. The wing section is scale being Clark Y, and even the original incidences have been maintained approximately. The aircraft itself has delightful lines and the model is easily the best looking we have ever seen.

The prototype model was powered with a 2.5 cc diesel and with that motor proved to have a fine performance. The rate of climb is excellent, and the glide flat and scalish.

The construction of the model is by no means simple and it is altogether more advanced than the Monocoupe. But to the modeller who has already built a Monocoupe or one of the smaller Mercury kits such as the Stinson or the Skyjeep, the AERONCA should present no difficulties. It can, of course, be entered in any scale free-flight contest with every-confidence as it really is a scale model when built according to plan.

In presenting the AERONCA SEDAN we are proud to say that it is easily the best kit Mercury has produced to date.

GENERAL NOTES. This model incorporates the well-known wing fixing method which has proved so successful on our other flying scale models and this should not be modified in any way. Use only the best quality bands on both the wing hooks and the strut hooks and always be careful not to perforate these bands with your hooks when assembling. Discard any band that shows sign of wear and tear.

Do not attempt to overpower your AERONCA by fitting too large an engine. The modern 2.5 ,ccs. diesel has more than enough power to fly the model well and in fact a large airscrew has to be fitted not only to preserve the scale appearance but to keep the motor r.p.m. down and reduce the power output. To fit a larger motor only adds unnecessary weight and makes trimming and flying more difficult.

During the early 1950s Mercury Models, under the direction of Henry J Nicholls, produced three splendid scale aircraft, all designed by Ron Young. In 1950 came the Monocoupe at 64 inch span for 1.5 to 2.5 cc, then a smaller 40 inch Monocoupe for 0.5 to .75 cc. For 1952, the Aeronca Sedan at 65 in span appeared in the model shops. I have no idea how many Aeroncas Mercury produced, but it was very popular. I do remember how well it flew, and the deep impression it made on me at the tender age of 14 years.

There was a young man I used to fly with in the Watford area named Roy Wall. Not only did Roy build really well, but his finishes (all brushed cellulose) were superb. There's a photo of Roy in a Keil Kraft Handbook holding his Southerner 60, about that time. Later, he sold me his Southerner and I put my ETA 29 in it. Talk about a climb! But I digress..

Roy Wall built an Aeronca with (I think) an ED 2.46, like the original. With his beautiful paintwork and accurate build, it flew sedately in large circles, looking very 'real' in the air. My only successful models at that time were 'sports' types. Scale seemed out-of-reach, for experts - or at least for blokes with a job and more pocket money. Also, my building was appalling. There was always more glue and dope on me, rather than on the model.

These days, I use R/C to keep my vintage sport models flying on the small fields available to me. This relaxed 'guided free-flight' suits me very well and gives me great pleasure. It would be great to have just one scale R/C model that could fly in the same relaxed way. It came as a surprise to find that the plan for the Aeronca Sedan is still available 50 years later.

Is it proper scale? The outline looks fine and, according to the notes, it has scale areas and tail moment, plus scale dihedral and wing section. If you were fussy, you might criticise the nose shape or worry about the sectional shape of the dashboard, which doesn't tally with the Sedan's sales brochure.

The aerodynamic balances on the rudder and elevator are missing, but you could build them in. Probably it wouldn't pass muster in a modern scale top level comp, but for what I want that doesn't matter.

What engine? The engine bay is huge, but you only need a modest 2.5 to 3.5 cc.for even an R/C version. However, you do need a rear induction. You could use a front induction engine, but you would need a shaft exten-sion to suit the cowl and nose. A small four-stroke would be nice, or perhaps an
Indian Mills 2.4 with R/C throttle.

Only two motors in my small collection seemed suitable - a CS repro ED 3.46 Hunter, and Ian Russell's Lynx. The Hunter (great engine) was doing sterling work in a Super Scorpion (oz2018) so the Lynx was gently run-in and the throttle tested. The throttle response is not as good as a glow motor, but it should be adequate.

The original had an ED 2.46 mounted sidewinder so the cylinder was flush with the side of the cowling. Personally, I hate to see a hole in the side of a scale cowl, so the Lynx was fitted inverted with the bearers below the lugs so it drops in from above. That way the engine is almost entirely hidden.

Room for R/C? You must be joking! There's enough room for a party in there. If you wanted to do a detailed interior, you could use small servos and hide them under four scale seats with pilots and passengers..."

Update 24/07/2017: Added article, thanks to Pit. This is a later 'Scale Nostalgia' article from Flying Scale Models. 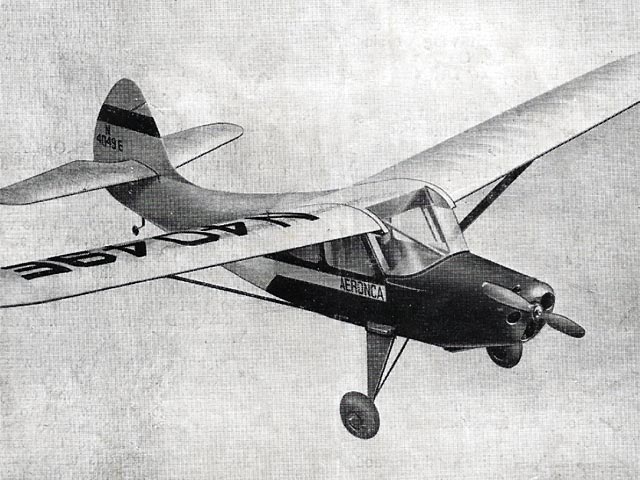 Photo of the completed Sedan model was found online at www.n1331h.com/scale_sedans/mercury_aeronca_sedan_scale/ which also hosts for download a full 2 part 2005 FSM article by Dave Deadman that covers in detail doing a modern RC conversion of this kit.
SteveWMD - 27/05/2013
A few more photos from the archives [more pics 006, 007]. Mercury Aeronca Sedan: I converted the free flight kit to RC.
AndyCoutts - 09/03/2017
Attached box kit image [more pics 008].
Pit - 24/07/2017
Hi. I would like to thank you for the service that you offer and for the time and dedication spent to build up this great site. I recently downloaded the plans for the Aeronca Sedan and enlarged them to 83" wing span. The Aeronca was built for a Memorial vintage meet that we have in South Africa and I wanted a special plane for the event. It was built in 5 weeks so it was a little rushed but I am very happy with the end product. I did do a little of a build blog on the UK model Forum and the South African one as well. The parts tiles need to be checked as you build as the size is not constant but not really an issue if you are aware of it. These are some of the pictures of the project [more pics 009-012].
ChrisFreeman - 06/08/2019
Attached is a scan I made this week of the original instruction manual for the Mercury Aeronca Sedan kit which my father purchased in the 1950s [supplementary file]. You have the plan, so I thought you might like to add the manual as an additional file. I still have the plans he used, too, but in a pretty much unusable state. I hope to get to a rebuild myself in the next year so will be downloading a copy! Thanks for your curation of your wonderful resource!
PeteNewman - 27/08/2019
Add a comment