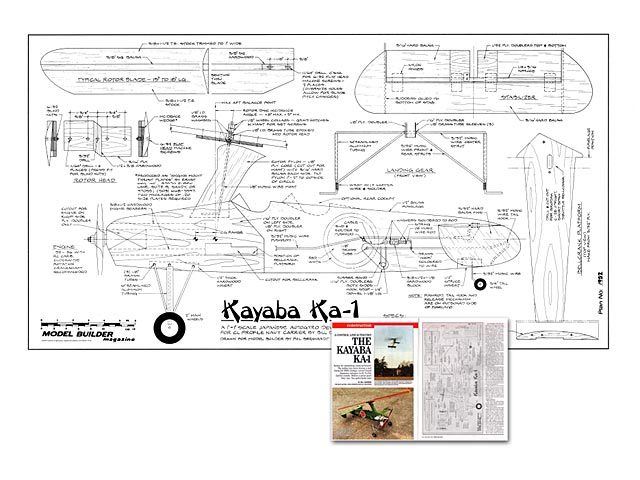 Quote: "In 1943, when Japanese shipping losses were becoming a serious problem, several Kayaba Ka-1 autogyros were armed with depth charges and stationed aboard the escort carrier Akitsu Maru. Their performance was impressive. Takeoff runs were less than 50 feet and landing distances were near zero. Their mission was defeated, however, when the Akitsu Maru was sunk by an American submarine on November 15, 1944. Still, the Ka-1 remains the only armed autogyro to fly carrier-based combat missions.

Likewise, my profile Ka-1 is the only model autogyro to make an official flight in CL Navy Carrier. It placed 2nd among five entrants in Profile Carrier at the Fourth Annual Great Desert Carrier Bash in Richland, Washington.

Although CL autogyros are fun to fly, a unique design chal-lenge and attract much attention, they are seldom seen. Except for rare scale or sport models, their development has been neglected. Navy Carrier offers an opportunity to develop competitive CL autogyro designs. The complex 'trick' gadgetry currently used to force fixed-wing carrier models into unrealistic slow-speed flight attitudes is unnecessary. Slow-speed autogyro flight is simple and natural.

Bill Bischoff, Chairman of the AMA Control Line Contest Board, has ruled: I can find no reason that an autogyro should not be legal in any of the Navy Carrier events. With particular reference to the 300 square inch minimum wing area rule in Profile Carrier: I find no reason to disallow this model due to size constraints. And finally: To summarize, I feel that the existing Carrier rules do not specifically prohibit autogyros from entering.

Dick Perry, Navy Carrier columnist for Model Aviation, has written: I do not believe that autogyros are prohibited under the existing rules. I personally would like to see autogyros fly in Carrier.

Design and Construction: Blades: In an autogyro, lift comes from the area swept by the rotor blades - the 'rotor disc.' The amount of lift generated depends on the disc area, angle of the disc to the thrustline, angle of the blades to the hub, and blade rotation speed. Blade rotation speed depends on the forward speed of the aircraft and the relationship of blade area to disc area - the solidity factor. A low solidity factor gives less drag, allowing higher rotor and aircraft speeds; short takeoff and low-speed performance suffers, however. A high solidity factor gives greater lift at low rotor and aircraft speeds, but the increased drag limits top speed. Solidity fac-tors can range from 8 to 15 percent, but 9 to 12.5 percent has proven more practical.

Disc diameters of 24 to 42 inches have been used, but 30 to 36 inches seems to be the optimum range. Generally, larger diameters have smaller solidity factors and vice versa.

To find the blade size for your autogyro, first determine the disc diameter and solidity factor. Then find the area of the rotor disc. Next, multiply the solidity factor times the disc area. That will give you the total area of your blades. Finally, divide that area by total length of all blades to find blade chord.

If you use three or four blades, divide the blade area by their total length. The blade chord will get narrower unless you increase the solidity factor and/ or disc diameter.

In counterclockwise flight, the blades must rotate clock-wise. They should be kept light because they must spin up and slow down quickly. They must also be strong enough to take the stress of high-speed rota-tion while supporting the weight of your model.

As the plans show, each blade is built up of four pieces. Glue carbon fiber strips between the spar and leading and trailing edges. Round off the leading edge and the top of the spar and you'll have a good flat-bottom airfoil on light, strong blades. Be sure to build all blades alike. Have some spares handy also; you'll break rotor blades just as you break propellers. Static balance is critical. Each blade must be balanced both spanwise and chordwise. When the blades are bolted to the hub, the entire assembly must balance. When you replace a blade or bolt on a different set of blades, the assembly must be rebalanced.

Hub and Mast: The areas and angle settings of the rotor blades, hub and mast will determine your gyro's flight performance.

The rearward tilt of the mast determines the incidence angle of the disc, which has a direct effect on the model's perfor-mance. It all depends on what you want. Low angles (3 to 4 degrees) give less drag and higher speed, but longer take-offs. High angles (7 to 8 de-grees) a I low shorter takeoffs and near-hovering low-speed flight, but limit top speed. Medium angles (5 to 6 degrees) appear to be the best compromise.

The blades are mounted to the rotor hub at a negative incidence angle, which can be adjusted as needed. Ernst Manufacturing produces three sizes (.20, .40, and .60) of what they call 'Engine Mount Thrust Plates' in 1, 2, and 3 degree increments. They make perfect rotor blade incidence wedges. Two packages of the .20 size will provide all the variations needed. The hub is mounted perpendicular to the mast. If the mast has a 6 degree rearward tilt, then the disc will have 6 degrees positive incidence. In that case, each blade must be mounted to the hub at no more than -6 degrees, or the gyro won't fly properly..." 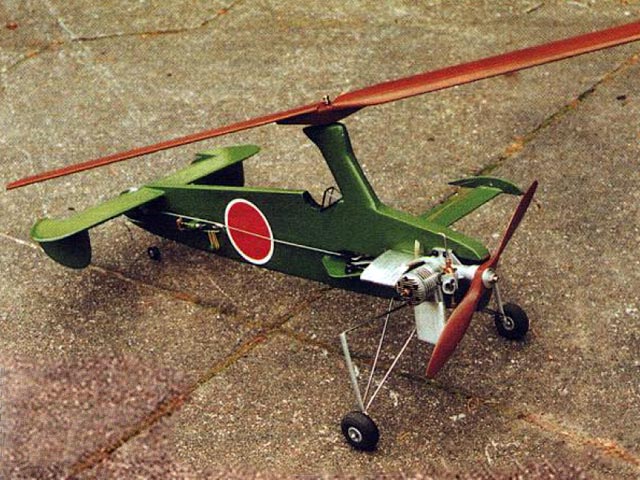