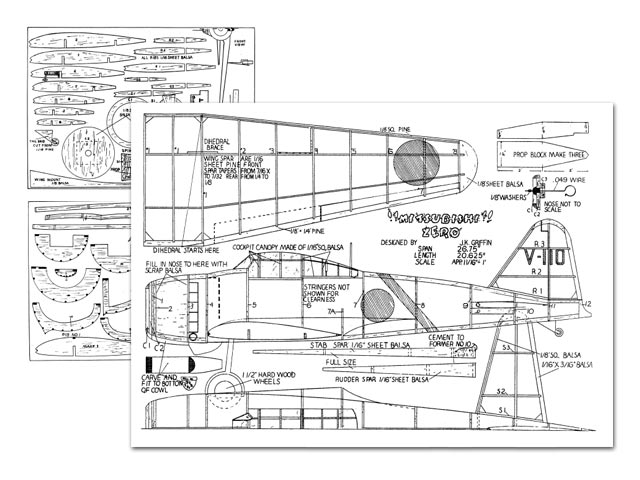 Quote: "Plans for an excellent-performing job that may be built with a minimum of effort. Zero, by Jack Griffin.

From out of the East comes the white angel of death in the form of the Mitsubishi Zero fighter. As to its ability as a fighter, that is a bone of contention, but those who have fought against it agree that at slow speeds the ship is very maneuverable. Its wing span is 39 feet, 8 inches and the overall length is 30 feet, 3 inches. The gross weight is 5200 pounds thus making one of the lightest fighters in the war. It derives its lightness from the absence of armor plating which protects the pilot and engine. The cockpit is so small there is no room for a parachute. It has a 900-1000 hp replica of the British Armstrong Siddley 14 cylinder air-cooled motor. The propeller is a very excellent copy of our Hamilton Standard model. As for armament, the Zero has two 303 caliber machine guns mounted in the nose synchronized to fire through the propeller, and a 22-mm cannon in each wing panel. The top speed is around 300 mph. Range is 1000 miles, ceiling 30,000 ft.

The model is designed using the former and keel method. Some parts have been made of pine where balsa was not available. The first step in building the model is to double the size of Plate No.1. This may be done by using a scale ruler, proportional dividers or by photostating. This should not be hard for all that is really needed is the outline of the fuselage, as formers and keel are drawn in full scale.

Fuselage, Wing, Tail. Use carbon paper and trace fuselage formers on 1/16 in sheet balsa. Trace and cut formers 1 and 2 from 3/32 in sheet. Cut the keel parts and wing mount from 1/8 in hard sheet. Assemble over plan using pins to hold in place. Cement formers in place using a small triangle to make sure they are perpendicular to the keel. Cement middle stringers next. When dry, remove from plans and attach formers from the other side in place. Remaining stringers are set in position taking care to alternate from one side to the other so as to not pull the fuselage out of line. Note: Do not assemble bottom stringers until wing is in place.

Fill in nose by inserting scrap pieces of 1/16 in balsa between stringers from former No.2 to No.3 as shown..." 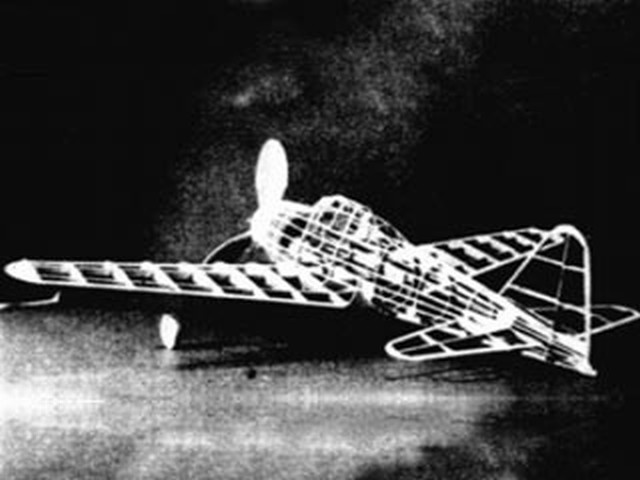