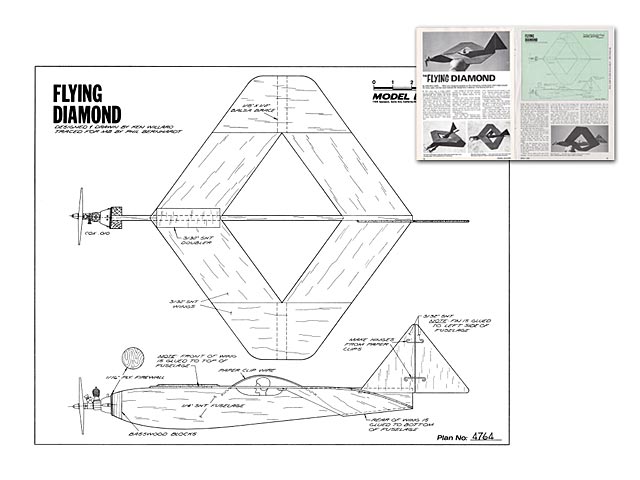 Quote: Whet your designing appetite on this interesting configuration that's been around for many years, but has never received the recognition it deserves. One evening will do it.

Fifty years ago, a young English aircraft designer, Norman Hall-Warren, experimented with models and found that the rhomboid planform for wings, if properly configured for angular settings between the forward wing, which sweeps back, and the rear wing, which sweeps forward, was not subject to stalls or spins. He patented the concept, and set about getting backing to build a full-scale test craft. He was unsuccessful. It is amusing to note that at one point in his efforts, he received a communication from the British Air Ministry, in 1937, which said 'There is no future in swept wing aircraft.' How about that!

Even though he persisted, Norman Hall-Warren could not get sufficient backing, for various reasons, for his concept. Articles have been written through this time-span regarding the rhomboid concept, and about six years ago I was intrigued, and, together with my friend Bob Andris, built a radio controlled version. It was completely successful, and we turned our test results over to Hall-Warren for whatever use he could make of them. Nothing happened.

Then, recently, the National Aero-nautics and Space Administration announced that they would be studying some 'advanced aircraft designs,' such as an 'unusual double-wing configuration.' An artist's concept was distributed to the press, and it was published in Aviation Week and Space Technology, a prestigious trade magazine. People familiar with the concept were quick to point out the long history behind it. It will be interesting to see what future actions take place.

Meanwhile, I thought some of you model experimenters might like to try flying a simple free flight version. So, with a few pieces of balsa, some paper clips, a small block of hardwood for an engine mount, and some five-minute epoxy, the Flying Diamond came into being. With a Cox .010 up front, it will spiral up almost out of sight with a full tank of gas, and then glide back in a gentle spiral to land. The upward spiral is to the left, and the downward glide turns to the right - just like a good old fashioned sport free flight - except it won't stall. Mush, yes, but no stall. And if you adjust the rudder correctly, it doesn't mush, but climbs up and out in a solid climbing turn. Incidentally, it is just a bit sensitive on the engine thrust setting, requiring right thrust and down thrust to avoid a steep spiral glide when the engine quits.

Building the Flying Diamond is a breeze. As you can see from the drawing, the wings, fin and rudder are cut from 3/32 sheet balsa, 3 inches wide. Butt join the center line of the forward wings, and epoxy the 3/32 doubler in place. Don't join the rear wings. Cut out the fuselage from 1/4 inch sheet balsa. Epoxy the hardwood (I used basswood) engine mount block to the side of the fuselage, and shape to fit the backplate of the integral tank on the .010.

Epoxy the fin right to the side of the fuselage. If you're a purist, you can cut a slot in the top of the fuselage and epoxy the fin in the slot so it will be on the center line. It's not critical - nor is the shape, so long as you keep close to the overall area.

The fin and rudder are joined with light paper clip wire epoxied to the surfaces. This wire is soft and makes it easy to adjust the rudder setting. Use the same wire to form the 'canopy.'

Now you are ready to mount the wings. Epoxy the forward center line to the fuselage and let it harden. Be sure the center ends of the rear wing are below the tail of the fuselage while the front end is drying in place. They can't be put there afterward..." 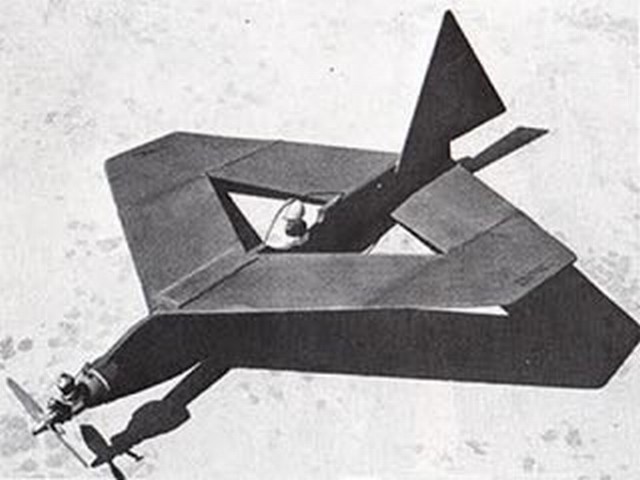