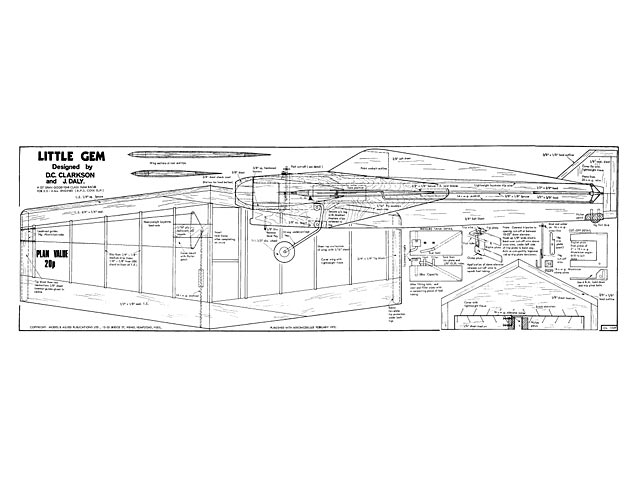 The Cassutt 'BooRay'. The full-size BooRay is a Jim Cassutt design, built and raced by Marion Baker, in whose hands it has proved to be the fastest Cassutt built to date. The builder removed many of the curves from the basic design which is why this particular Cassutt has been selected for control line racing. The basic three-views used to build this model were found in the Racing Planes Annual for the Cassutt IIM and these have been modified to BooRay after studying the numerous photographs of this aircraft in this publication.

Three replicas of this model have been built by fellow club members and all proved to fly very sweetly off the club field, which consists of short grass, when a conventional mono-leg undercarriage was used (as shown on the Little Gem plan). However, future development of this very successful model proved that pit-stops could be improved by fitting a rearward wheel and prop skid, and this arrangement is shown on the plan.

When this undercarriage lay-out is used, it has been found that cutting the motor (via the fuel shut-off) three-quarters of a lap from the pit man, the model can be 'greased-in' half a lap out, then an application of full down elevator quarter of a lap out moves the model firmly on to the out-board tip and nose skid. This slows the model considerably as well as stabilising it on the ground so that it arrives at the pitman firmly and at a comfortable speed - no danger of taking his hand away! However, the designer stresses that while take-offs and landings are trouble-free in calm weather, an experienced pilot could be a considerable asset under inclement conditions. If you lack this confidence. then you would be better advised to fit the Little Gem's forward-raked unit.

'Little Gem'. Originally built by Jim Miller in 1949 as the Miller Special, it was subsequently re-built to its present form after a major crash. As the Miller Special (and later known as Little Gem and Ole Tiger as re-named by different owners) it has proved to be one of the fastest Goodyear midgets ever built. As Ole Tiger it has appeared with a slightly higher fin and for this reason the Little Gem plan has been selected. The basic three-view used is also from the Racing Planes Annual, increased over-scale to bring it it line with the current SMAE rules.

Construction. Two forms of wing construction are shown following the designers' personal preferences. Both feature buried leadouts and controls to give a 'clean' appearance and also to allow the unconventional 'catch' mentioned later.

The BooRay's wing is assembled using a 1/2 x 1/4 in spruce leading edge, a 1 x 1/4 in hard balsa trailing edge and medium 1/4 in sheet in between. The lead-out ways should be cut out from top to bottom before shaping the wing. The centre portion of the wood cut out should be removed and the top and bottom pieces re-installed together with the lead-out guide tubes. The wing is now shaped to a semi-symmetrical section using a razor-blade plane and sandpaper - care should be taken not to make the leading edge too sharp. After shaping, install the lead-outs and the circular bellcrank and cover the centre section with 1 mm ply, leaving suitable holes for the pivot bolt and the pushrod..."

Article page, text and pic, thanks to Fernando. 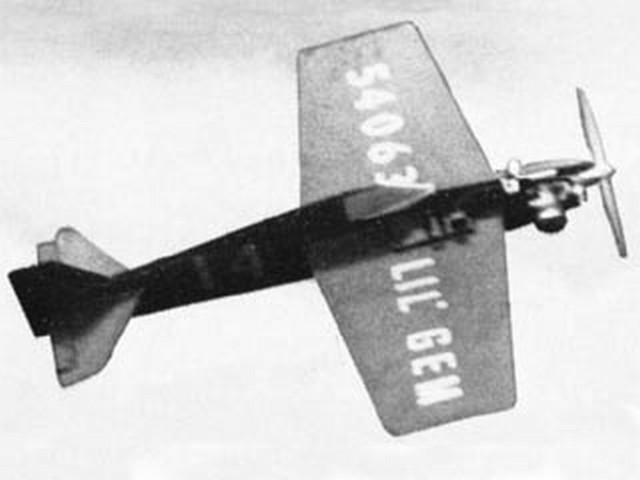