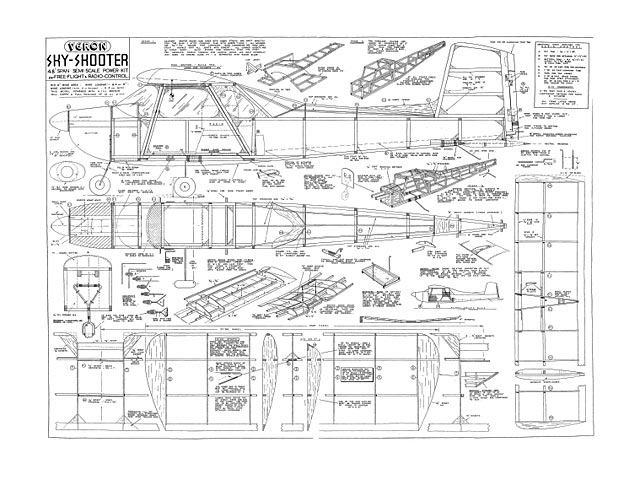 OUR experiences in flying the Sky-skooter have left us with a most favourable impression of this model's capabilities. In fact, for sport flying with radio control it is one of the most viceless designs we have come across.

The particular model we used was built from a standard kit. It was built quickly with no especial care, but with just the minimum amount of attention necessary to get accuracy. It was doped with coloured dope - four coats on the fuselage and two on the wings regardless of weight and a standard ED lightweight radio receiver and actuator installed. The completed model then weighed in at 23-1/2 oz with ED Bee motor. Plan and instruction leaflet were followed faithfully, even as regards details conflicting with our own ideas on the subject. Most of these latter features, incidentally, worked out quite satisfactorily, although there were one or two modifications we eventually thought advisable before test flying. These will be described first.

The actuator hook-up with a length of 20 swg wire extending from the actuator itself down to the rear of the fuselage appeared a source of potential trouble. With only one intermediate bearing it appeared too flexible and definitely had a tendency to vibrate with the motor running. It was therefore replaced with a rigid coupling of a type which had hitherto proved satisfactory on a similar set up.

The extension shaft is of hard 1/8 in sq balsa. A hardwood dowel of similar size would probably be even better, although balsa is quite strong enough for the job. Wire fittings are then forced over each end, these being bound and cemented in place. These couplings consist simply of an open spiral of wire which slips over the rod, terminating in a stub shaft. It is important that these stub shafts line up accurately..."

Update 11/10/2014: Made a minor change to this plan by replacing the title block with original details and showing the original plan title spelling of "Sky Skooter" not as previously "Sky Scooter", thanks to Guehand and all. 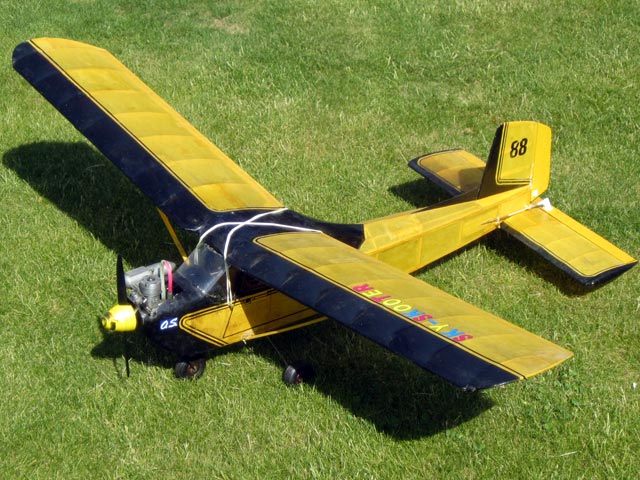 G'day Steve. I have attached a photograph of the Veron Sky Scooter [see more pics 003] I built from a plan I downloaded from your website. The plane is from the larger 48 inch drawing that I have called the Sky Skooter, simply 'cause Skooter looks better than Scooter. I enlarged the drawing to 125%, 60 inches and made a few changes. Most obvious is that it is now a tail-dragger and I have re-positioned the stabiliser from under the fuselage to under the fin. Looks better and as I discovered from other planes, more convenient. You will also note the rudder is full fuselage depth. Although every now and then I get things laser cut, this one is traditional, everything is cut out by hand. Traditional also describes everything else - covered using lightweight Chinese silk. First a few coats of nitrate dope, then butyrate clear, then coloured dope to finish. The decals are also painted on using red dope (all Randolph Dope). Only the OS decals are the sticky stuff. Weighs in at just under two kilograms. Engine, an OS 26 four stroke and it chugs around at half throttle. An OS 20 would have been adequate. I enjoyed the build so much I am now building a 90 inch version. On the down side: 1. I grew up building free flighters and ignored the free flighters mantra 'More down thrust' which means it has a lot of down elevator trimmed in. 2. The front elastic band dowel is actually under the leading edge which means the leading edge lifts away from the fuselage easily so when I fly, I first tape the leading edge down with blue electrical tape then apply the elastic bands. On the 90 inch version I extended the nose by 30mm, I am doing away with elastic bands in favour of dowels at the front and Nylon bolts at the rear. There will be 2 degrees of down thrust and 2 degrees of right thrust built in. Otherwise, the aeroplane was a dream to build, looks great and flies great.
JohnPeric - 26/09/2014
Corrected the spelling now, thanks.
SteveWMD - 11/10/2014
I saw the SKY SKOOTER today on your website. I have built two of this nice model. The first 1963 from a Veron kit and single RC operated, motor was OS.09 (pet). This was one of my first RCs #4 and I learned to fly RC with this good model. My second Skooter was built 1997 from the same Veron plan, equipt with an OS.15 and has attended in several OT-competitions. It was sold this year in June to a beginner in RC. The images are from the last model except the carton ('63) [more pics 006-009].
OweCarlson - 18/10/2017
More than 50 years ago I built my first Veron Sky Skooter. This plane was equipped with a 1.5 cc diesel engine and a self-built one channel radio control. This year I built my second Sky Skooter [more pics 010]. Now with an electric motor and radio control with telemetry and GPS. The Sky Skooter is flying great!
Nico_Steenbergen - 09/11/2018
I bought this kit (£6.95) from the model shop on Railway Street, Nelson, in Lancashire. I was 12 years old and it was an impulse buy bought with money from my paper-round. As I only had a Cox Babe Bee .8cc I had to modify the beam mount to radial. The actual air-frame was built to a quite high standard - for me anyway - but the covering wasn't too good using an orange version the then new heat-shrink Humbrol brand (?) Modelspan. This model was unfortunately the start of some very bad behaviour on my part: I discovered that if both your parents worked, then one didn't need to actually go to school any more. The first round of truancy soon grew to a record five-week block. The trick was to return to school for one day after the prolonged period of 'MiA' absence and then take a further day off 'sick' with your mum's approval. This produced the requisite sick-note to give to teacher. Of course I eventually was rumbled. The 'I cannot remember even seeing Ian this term' on my report card possibly gave me away...
However, I spent my days at home learning all about aeromodelling, going out to buy things like a Telco CO2 motor and endless balsa kits. I still maintain that my self imposed home 'education' was beneficial to me as an adult in many ways...
Many years' later I gave a 70's Ripmax catalogue to one of my friend's son. In passing, I asked whether he'd ever looked at it. 'He hasn't put it down since you gave it to him!' It was 12 months later!
Try it with your own old modelling mags & catalogues on today's kids, you may well be surprised :-)
Thank you for posting these plans!
Tobytronicstereophonic - 16/05/2020
I was going through an old cupboard at home and found an original boxed sky-skooter, wow, googled it out of curiosity.
Rob - 25/03/2021
Add a comment