Quote: "I originally designed Buzz Bee in 1991 for my eight-year-old son. He had already built a couple of simple kits, but there didn't seem to be one readily available as an intermediate type which would increase his building skills, fly well and not be too small and fiddly to make.

Frustration and boredom set in quite quickly with most youngsters (an eight-year-old's attention span is about 15 minutes if you are lucky). For these reasons the model had to fulfil certain criteria. It had to be bigger than most kits offered for beginners, but not so large that it could not be built on the kitchen table. Equally important, it had to be stable, easy to trim and not too expensive. We had a lot of fun with the rubber version first and then went on to power it with an inexpensive CO2 motor.

Start by selecting some good quality light wood and ignore the hard and heavy stuff one so often sees in R/C model shops. PVA white wood glue is very good for this job as well as being safe and easy to use. It is assumed that beginners will be working under some supervision and advice, although if they have made a couple of similar models they should be OK solo.

Fuselage: Put the plan out on your nice flat building board and cover it with cling-film. It is important to set out from the start which version of the model you are going to build - the rubber or CO2 one. Throughout the construction various parts will need to be installed or omitted depending on the type being built. Consult the plan carefully.

Build one fuselage side over the plan first; when dry take the pins out and cover it with another piece of cling-film. Build the second side directly over the first one. This will ensure they are exactly the same. When the glue is dry separate thesides and fit the spacers sothat the fuselage is true and square.

It pays to be patient and only fit a couple at a time, waiting for the glue to dry before fitting any more. You can always be getting on with the other components in the mean time. I would suggest that if a very young person is to use the model (ie letting a younger brother have a go) it would be as well to install sheeting into the bottom half of the bays below the cockpit glazing to avoid fingers being poked through the tissue.

Beginners are strongly recomm-ended to use a ready-made prop for the rubber version, either plastic or balsa. If one cannot be obtained it is a good idea to ask a more experienced modeller to help you make a prop from the blank shown.

Wing and tailplane: No problems here, but as with all wing/tailplanes great care should be taken that they are built true and no warps occur. A little extra time spent at this stage will pay dividends when flight trimming any model. Using two thin ply templates, all the ribs except the tip one can be made by the sandwich method.

Covering: This is the stage that beginners often find most difficult. The model can be covered either with lightweight tissue or one of the lighter heat-shrink materials such as Airspan. If you have already made a good job of tissue covering..." 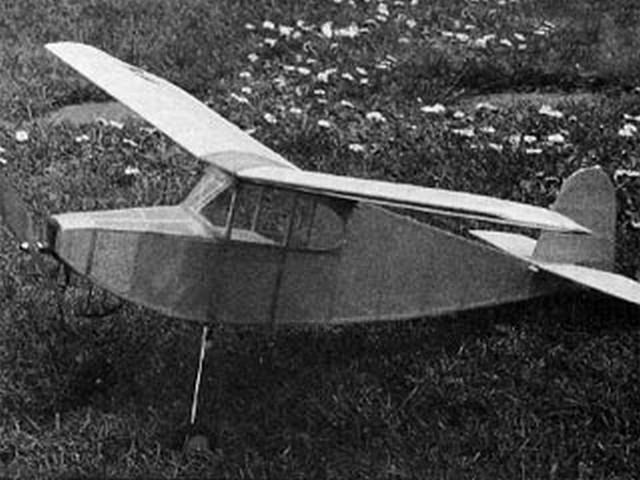