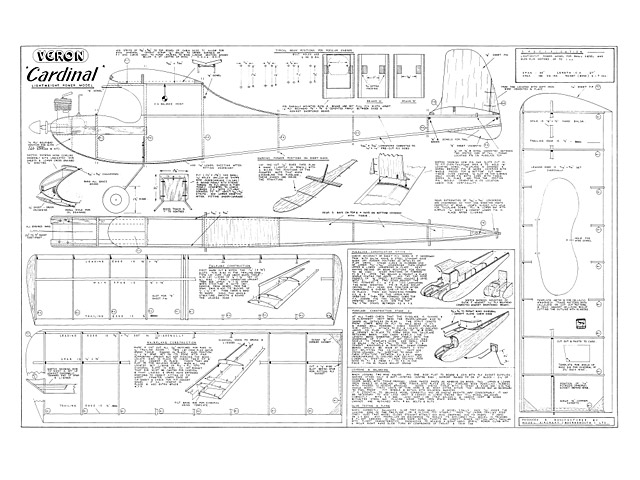 Quote: "The Cardinal free flight powered model has been designed as an extremely simple and easy-to-build model for small motors from .5 to 1cc diesel or glow-plug, which at the same time will ghive instructive and trouble free stable flying. The model has extreme inherent stability, and can be thoroughly recommended to the beginner to powered flight. So long as wing and tail are reasonably warp free, the balance correct and test glides carefully made to check incidences - then this model is capable of contest performance..."

Update 08/12/2017: Replaced this plan with a clearer copy, thanks to otech66 who posted a scan on HPA. Have spent a couple of hours now cleaning up that scan, to arrive at this point. This (later?) version of the Veron Cardinal plan also happens to show full wing layout with both sides in full, so easier to work on than the previous copy. 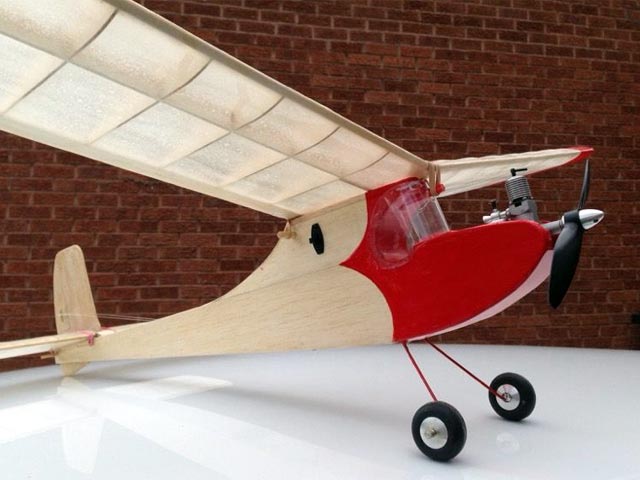 Hello Steve, Firstly, I'd just like to thank you for all of your work in providing and maintaining www.outerzone.co.uk, it is by far and away the best free plan site that's ever been on the Internet. My friend and I are regular attendees at the BMFA Nationals and this year decided to build a couple of models for the free flight mass-launch on Saturday evening [see more pics 003-006]. After referring to the Outerzone, we settled on the Cardinal because it's relatively simple so could be built in the few weeks we had before the August Bank Holiday and we both had spare power-plants sitting around doing nothing; his a brushless electric motor, mine, a DC Dart that I bought about twenty years ago but had never even run. We made a few small modifications to the design along the way, we've added a couple of extra 1/8th square balsa spars to the top of the wings and a small amount of sheeting near the centre sections. The fuselages have also been sheeted completely between the trailing edge of the wing and the sternpost with 1/32nd balsa, top and bottom. These mods were simply to strengthen the models slightly as the mass launch always involves a lot of obstructions - Usually observers! Built as designed they would have been lighter and no doubt would have been perfectly strong enough for normal sport flying. We've also made our fins a tiny bit taller to eliminate any tendency for the famous Cardinal Dutch Roll. Both models are covered in domestic tissue, very much like what would have originally been in the kit, and they are finished with Halford's car rattle cans, my friend has added printed tissue Union Jacks to his too. Mine, being diesel powered, is fuel proofed all over with gloss Aerokote ...Both models have flown and flown well, mine covered about two miles on its first powered flight with absolutely no trimming required and I was very lucky to find it again ...I hope you enjoy the pictures. Keep up the good work on the Outerzone, it is much appreciated by me and doubtless thousands of other modellers worldwide. Cheers,
Pete - 03/09/2015
Besides being a highly successful F/F sport model Phil Smith's delightful little Cardinal also makes an excellent electric R/C park flyer. The red white and green model [see more pics 007] is my R/E/T model which started life 10 years ago with a GWS twin motor geared unit. This suited it very well until one of the motors died when performance became somewhat marginal. A very cheap brushless "bell" motor was installed and that is how it has flown ever since accumulating a lot of flying hours as it has been my "go to" model for teaching visiting non-modellers the rudiments of R/C flying for the last seven years. The fact that it has survived this unblemished (albeit with the colours somewhat faded by exposure to the sun) is a tribute to how easy it is to fly. Specification of my model: Weight 10.5/8 ounces, wing loading 8 oz/sq. ft. Motor Towerpro bell motor. Prop GWS 8 x 4.3 EP, battery 2S 850. Full throttle watts 60 at 8.2 amps gives VERY rapid climb. Lively flight at 25 watts/3.1 amps, level cruise at 12 watts/1.5 amps. Maximum watts/pound - 91
Sundancer - 28/03/2016
My Cardinal pictures are attached to this e-mail, to can add to the Outerzone plan page [more pics 008-010]. You can see my build thread here: www.modelci.net/forum_old_older
MehmetA - 22/11/2016
My Veron Cardinal, awaiting test flight [pic 011].
Brian Berwick - 06/07/2020
Add a comment