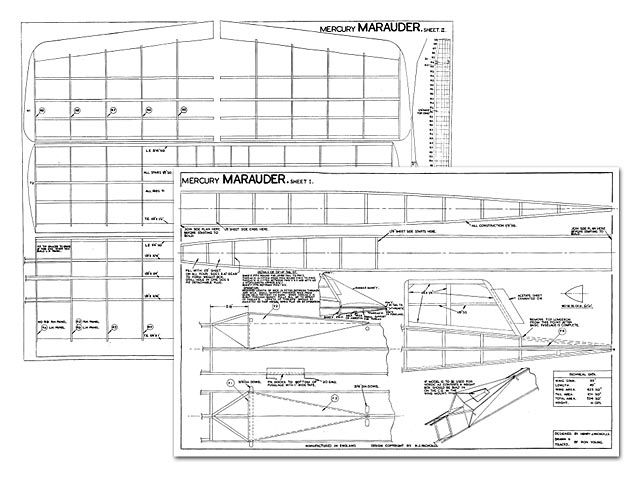 Quote: "This the first of a new series of Mercury kit models designated by the letter 'C,' which means simply that these kits will be designs for contest work with performance taking precedence over beauty of line and 'eye appeal.' With straight-forward structural design these C models will make it possible for the average enthusiast to produce a model which will genuinely give him a good chance in competition flying.

The Marauder is designed to A-2 glider specification, but as the total weight works out at approximately 11-1/2 oz (the remaining 3 oz weight required is carried in the form of ballast under the wing), it can equally well be used for both FAI and Open glider events. The design itself appears a particularly competent one and emphasises the modern trend towards the use of long fuselages, even on gliders. With moderately high aspect ratio wings, tail moment arm (wing trailing edge to tailplane leading edge) is three chords, enabling the wing area to be increased to 423 sq in; with a 101 sq in tail being adequate for satisfactory longitudinal stability.

Positioning of the tow hooks is also interesting, again reflecting a modern trend to move the point of attachment of the line farther aft. The rear hook is, in fact, aft of the centre of gravity of the model. A directly 'overhead launch' has obviously been aimed for here. The small, squat fin, together with the tailplane tip fins would appear to be quite adequate for towing stability.

Designed by Henry J Nicholls, the Marauder bids fair to carrying on the Mercury tradition of having one of their kit models in the British Nordic team each year. Both the 1950 and 1951 teams included Norsemen. The Marauder, we think, will make an even better contest model." 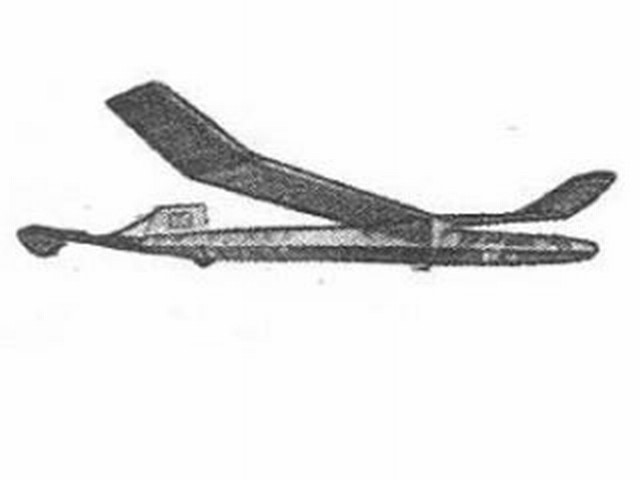 Hi Mary - Was home this weekend and went flying with Lindsay on Saturday afternoon. Beaut weather for flying and Lindsay was able to take some photos. Please see attached bare bones of Mercury Marauder [more pics 004-008].
AndyCoutts - 28/11/2016
Compliments of the season to you all. I'm back at work after a Christmas break, was able to finish off the replacement Caprice and Marauder, and test fly them before the rains set in. Both flew beautifully, unfortunately the Marauder landed in a ditch/storm water drain. No damage thankfully. Sending over a few photos [more pics 009-015]. Ditch and all, Lindsay as usual did a great job.
AndyCoutts - 12/01/2017
Weather was not on my side last time I was home, so flying and photographing were curtailed. However, I do have a picture of the Marauder in the ditch [more pics 016].
AndyCoutts - 09/03/2017
Hello Steve and Mary, Your sample photos from the gallery today included the Mercury Marauder and that reminded me that I hadn’t sent in photos of mine which I completed just before the lockdown [pics 017-019] and maidened after lockdown with Mick doing the honours on the video for YouTube.
Model has been scaled up 35% for brushless motor and RC. Details of the model with more photos are here https://www.rcgroups.com/forums/showthread.php?3642587 and the video is here https://www.youtube.com/watch?v=s5uLXET8Plg
Regards,
John - 02/09/2020
Add a comment