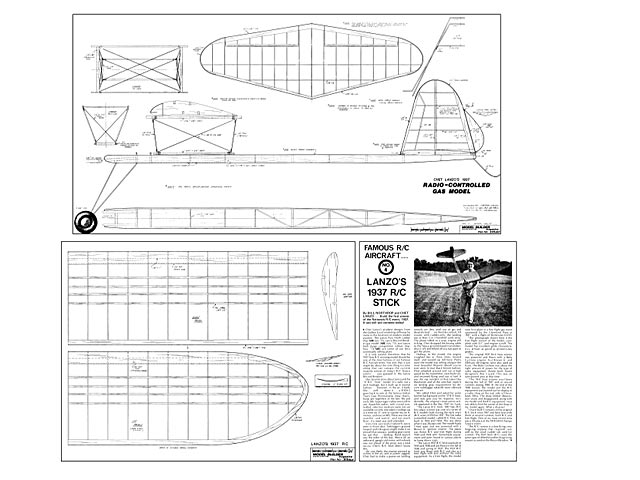 First published in Dec 1937 Air Trails. This is a later re-drawn plan from Model Builder.

By Bill Northrop and Chet Lanzo.

It is only natural, therefore, that his 1937 Nats R/C winning model should be one of the most famous of our Famous R/C Aircraft series. Not only that, it just might be about the only thing to come along that can surpass the current majority winner of today's R/C Texaco events - you guessed it, the Lanzo Record Breaker!

Our favorite story about Lanzo and his '37 R/C Stick model (it's really not a stick fuselage, but is built up in normal fashion - however, in the air, it looks like, well, damn it, a STICK! - goes back to one of the famous Indian Town Gap, Pennsylvania (near Harrisburg) get-togethers of the late '50s and early '60s. Superregen radios were still in use (Superhet radios, with crystal controlled, selective receivers were not yet available) so only one plane could go up at a time on 27, one or maybe two on 6-meters, and one on 465. There was lots of watchin' and waitin', and not much flyin', if a meet was well attended.

Very few successful takeoffs were seen in those days. Taildraggers ground looped and trike gears might make it on smooth flat runways. Landing gears were for just that -landing. Hand launch was the order of the day. Above all, an awkward, gangly old-timer, with wheels way out ahead of the prop, was a total no-no. Chet's R/C Stick didn't know this.

On one flight, the engine seemed to richen in the air, and as power sagged, Chet had to make a power-on landing (mostly we flew until out of gas and dead-sticked, no throttle control). Of course, with rudder-only, the landing was at least 2 or 3 hundred yards away. The plane rolled to a stop, engine still ticking. Chet dropped the keying cable to the heavy ground-based transmitter, shut it off, and hiked off at a fast pace to get the plane.

Halfway to the model, the engine coughed two or three times, cleared itself, and wound up full bore. Pretty soon the model was rolling along in the most beautiful 10-point takeoff you've ever seen. In true Mack Sennet fashion. Chet wheeled around and ran at high speed for the transmitter, switched it on, and resumed flying until out of fuel. It was the star incident of that Labor Day Weekend, and all the armchair experts on landing gear requirements for decent taildragger takeoffs were silenced forever!

We called Chet and asked for some further background on the '37 R/C Stick, and now give you his response. Incidentally, the original construction article appeared in the Dec. 1937 Air Trails.

The Lanza R/C Stick, 1937 Nats R/C first place winner was one of a series of R/C models built during the early years (R/C wise) of 1933 to 1937. The first radio controlled model, called R/C One, was built in 1933 and 1934. This was done when I was 20 years old. The model had a 7-foot span and was powered with a Brown Jr ignition engine. The plane was flown R/C and free flight during 1934 and 1935 with homemade equipment and parts found in various places to keep down costs.

The photograph shown here [main pic] is the free flight version of the model, complete with DT and engine cutoff. This model has excellent glide characteristics, almost as good as present-day gliders.

The original 1937 Stick Nats winner was powered and flown with a Baby Cyclone engine; but Brown Jr and Ohlsson .60 engines were also used up front. The Baby Cyclone was about the right amount of power for the type of radio equipment (home built, home designed) that I used. This was an unexplored area at that time.

The 1937 Nats winner was flown during the fall of 1937 and at several contests during 1938. At the end of the 1938 season, the model and the R/C equipment was loaned out for display in a radio shop on the east side of Cleveland, Ohio. The shop folded (Depression years) and disappeared, along with my model and the R/C equipment. I was not able to find the owner of the shop or my model again. What a disaster!

I have built 3 versions of the original R/C Stick since 1937 and have won with them at several contests, both R/C and free flight. One of my most recent wins was a 5th place at the 1978 SAM Champs Texaco event.

The R/C version is a slow flying, very forgiving airplane that responds very well to the small rudder tab used for control. The 1937 Stick (R/C) used the same type of dihedral and birdcage wing mount as used on the Record Breaker."

Quote: "Confusion persists about Lanzo Aerofoils. E.g: The Puss Moth has been published with a flat bottomed and an undercambered aerofoil. When the Bomber was approved by SAM in the early eighties, it was assumed to have the same aerofoil as the Record Breaker because the Long-Center Section version has the same wing planform. This was not the case. The R/C Stick did not specify an aerofoil and variations abound.
I found this blueprint in a box of tissue scraps left by the late Bucky Walter who worked with Chester Lanzo at NASA. I never met Mr. Hoffman but I'm guessing he was also a colleague or, at least, a fellow member of SAM Chapter 39. " 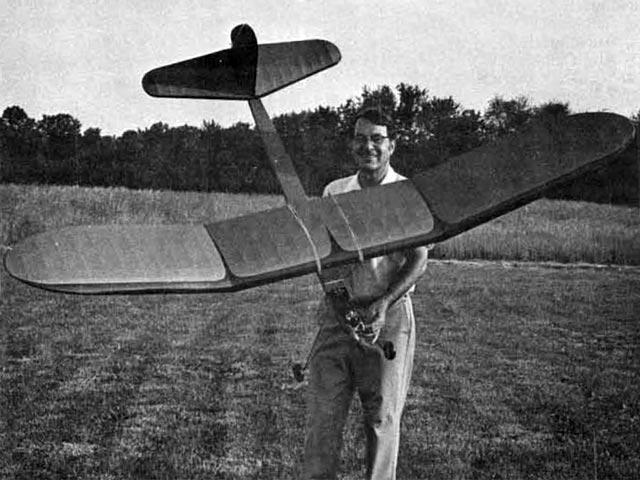 Here is some information on the so-called Cabin version of the R/C Stick. Chet never specified an airfoil but the plywood template he used was copied. The sparing is different from the MB plan but the airfoil is a lot closer than the G-8 seen on the Pond Plan. Still it required trimming to meet the specified TE material. http://www.thebuildingboard.com/2010/03/lanzo-cabin-stick.html
Tom - 23/01/2021
Add a comment