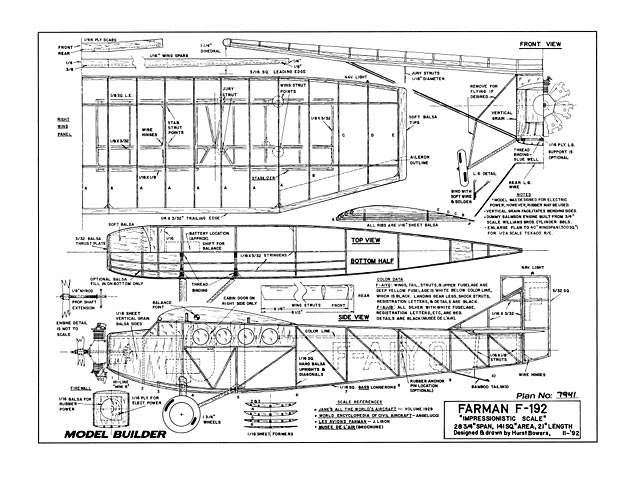 Quote: "The Farman F.190/192 was a late-1920s French radial-engine high-wing utility monoplane carrying four passengers plus the pilot. Hurst Bowers' 28-3/4 in span model was designed for electric-powered free-flight sport scale, though he also suggests enlarging to 300 sq.in. (x1.46 to 42 in span) for 1/2A RC. His plan and article were published in the July 1994 issue of MB magazine."

Quote: "Electric free flight scale at its best, by a recognized master of the art. We're also offering an enlarged copy of the plan for a 1/2A Texaco Scale RC version. Farman 190/192, by Hurst Bowers.

Avions Farman was established in 1908 by Henri Farman, who was joined in 1912 by his brother Maurice. The factory was located at Billancourt, Selene, a suburb of Paris, and is said to have been capable of producing 10 aircraft daily, of various types. This in itself was a remarkable accomplishment for a small new industry.

After the 1914-18 war, Avions Farman focused its industrial capability on the commercial market, and one of the first successful transports to fly the post-war skies of Europe was the F-63 Goliath, a twin-engine monster biplane of considerably advanced design and sophistication. The Goliath was followed by larger and more technically advanced transport airplanes which Air France and others flew throughout the then far-flung French Colonial Empire. Concurrently, the Farman engineers developed a vast array of single-engine airplanes for sport, training and general aviation between the two world wars. During this flamboyant period, the term 'avion de tourisme' was coined and remains in use today throughout the Continent. At that time Caudron, DeHavilland, Potez, Fokker, Dewoitine and Arado, to name but a few, competed with Farman for the avions de tourisme market.

I first became interested in Farman designs as subjects for modeling when visiting the Musee de L'Air, while I was I iving in France many years ago. The museum was then located at Chalais-Meudon, another suburb of Paris near Garches, where I lived. I spent many pleasant hours there with my friend, Maurice Bayet, who was a memberof the museum board and Director of Model Reduit d'Avian, France's most popular aeromodeling magazine. The aircraft that caught my fancy was a tiny Farman Moustique, which I later learned was not really a Moustique but a Type 450, which varied slightly in engine, nose moment and fin/ rudder shape. Nevertheless, I built several Moustiques, a Farman Sport and a Farman Type 404, all of which per-formed quite well. All were radio controlled except the tiny Sport, which was a CO2 powered free flight. I later took a liking to the very low aspect ratio wings found on the Type 190/192 and the 231. Both of these airplanes make superb subjects for modeling, particularly with electric power.

I found very sparse but adequate three-view drawings for the F-190 in the 1929 Jane's All the World's Aircraft and in the World Encyclopedia of Civil Aircraft by Angelucci. The latter presented a catchy white and deepyel low color scheme which I found most attractive, thus it became my model subject. I found pictures of the aircraft being powered with engines of from five to nine cylinders, some being designated F-190 and others F-192. Since all varied very slightly not only in engine and color scheme, but in rudder shape and windshield design as well, I drew up my plan accordingly and consider it to be 'Impressionistic Scale' as it portrays the most pleasing aspects of the many deviations, including photos of the example now belonging to the Musee de L'Air at Le Bourget Airport.

The size selected was based on the power of the wonderful little HiLine 'Mini 6' electric motor. Should one care to, the plan could be enlarged to approximately 300 square inches of wing area for 1/2A RC Texaco Scale competition. It should do remarkably well in this category, as it does in free flight. (Editor's note: Great idea! To save readers the trouble, Model Builder is offering those enlarged plans - see page 82 for ordering information. You'll have to reengineer the structure in places, determine new wood sizes and plan your own radio installation, but this shouldn't be a problem for the average scratch-builder.)

Construction is light and simple, yet amazingly strong. This is primarily due to the use of 1/16 square basswood for the fuselage longerons, and to the spar depth of the low aspect ratio wing. The construction is simple and entirely conventional, soI won't go into stick-by-stick instructions for building. Instead, I wish only to point out those areas worthy of note where a technique differing slightly from the norm was employed.

First, note that the forward fuselage sides from the windshield to the firewall has quite a sharp curve. This is easily and very accurately negotiated by using 1/16 vertical grain balsa forward side sections. When the sides are joined, reinforce the vertical grain nose section with balsa sub-longerons of 1/16 x 1/32 glued inside or, if you wish, the soft balsa top nose block serves this purpose very well. With the fill-in sheeting on the nose bottom, the structure becomes very rigid and strong.

I constructed a dummy seven-cylinder engine from 3/4 in scale Williams Brothers cylinder barrels. I also used 1-7/8 inch diameter Williams Brothers wheels, which are superb, though very slightly larger than scale.

One of the more difficult tasks was accurately cutting the round holes for the 'port hole' side windows. I used vertical grain 1/16 sheet balsa for this, sandwiched between two sheets of soft balsa, and made a cutting tool by sharpening the inside of appropriately sized brass tubing. By carefully and slowly twisting the tube, clean and accurate circles can be cut out.

I initially used three 110-mAH NiCd cells for power, installed in a trough so that proper balance could be achieved without adding ballast. My model proved to be slightly underpowered, so I will add a fourth cell this coming flying season.

My model was covered with Sig Plyspan (Japanese tissue) in the normal manner and sprayed with Floquil model railroad paint - white and mailbox yellow. I used black registration letters F-AIYQ to accompany the color scheme. Test glide the model over soft grass and use low power to establish trim and flight pattern. The little Farman is most 'impressionistic' in flight. 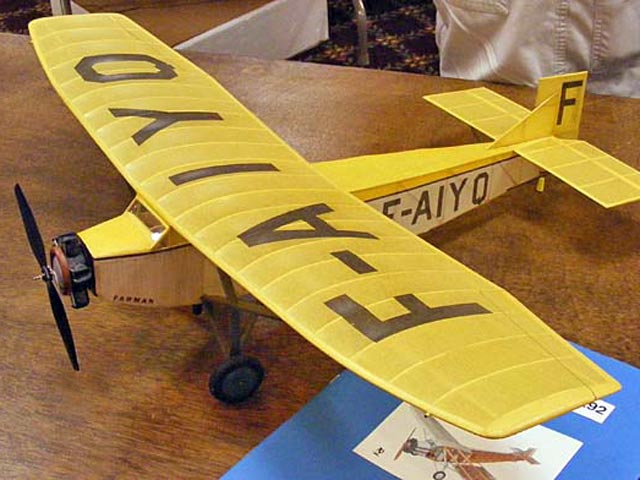