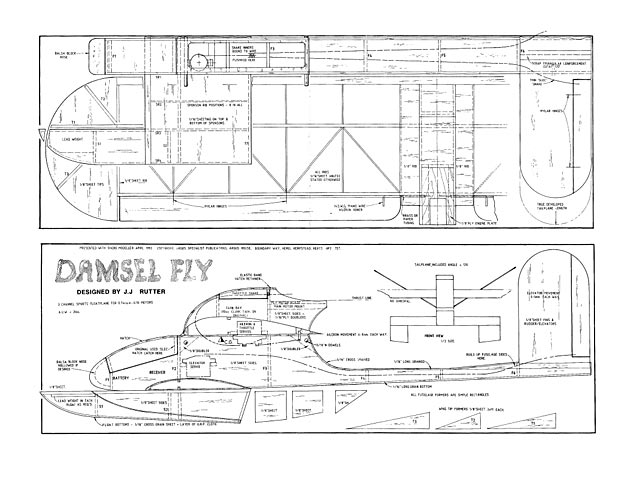 Damsel Fly is the result of a desire to have a second model for last year's Kielder event. I wanted something that would stooge around with little fuss, be mildly aerobatic and 'different'. My usual highly loaded aircraft are not the easiest things to fly off water so I opted for light weight and loads of wing area for the power (1-1.5cc) I had in mind. The model certainly looks different with the twin sponsons (for stability on the water) and vee tail (I hadn't built one for years) but I was a bit dubious of this latter feature as it precludes water steering. As it turned out I needn't have worried about the latter; more on this later.

The resulting model presented here is all that I wanted -quite stable and easy to fly and with a much better glide than my models usually have, despite a high drag configuration. I hope you like it.

Let's start. I started with the tail, it was the easiest bit! The halves are simply cut from light 1/8 in sheet and sanded to an aerofoil(ish) section before the elevators are cut off. I blocked the whole thing up to give 120° dihedral before adding the triangular reinforcement. Try to keep this lot light though as the short nose and rear mounted engine will mean a lot of lead in the front to compensate otherwise.

I did the sponsons next as I wanted to see what they looked like. The stub wing is straightforward enough; build it on the bottom sheet and cover it with the top sheet. I used balsa cement for this bit as its sets fairly rapidly, is water proof but gives time to move things around. I used cyano for almost everything else. The floats themselves proved a little awkward to do as drawn on the plan as there is very considerable twisting of the undersurface sheeting towards the front. This 'veeing' was intended to give cleaner running through choppy water but resulted in very little buoyancy forward.

Unless you are very taken with the shape drawn I would recommend leaving the floats rectangular in section like pontoons. This should stop the model trying to 'crash dive' on opening the throttle! I built the floats inverted on the top sheet shape but didn't finish sheeting the front end until the rest of the model was covered... " 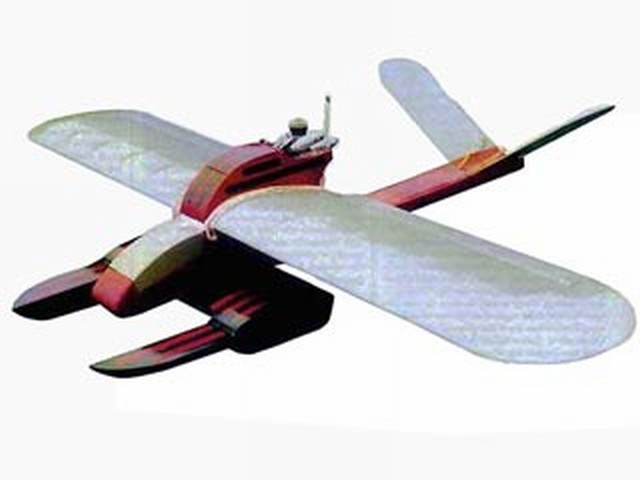