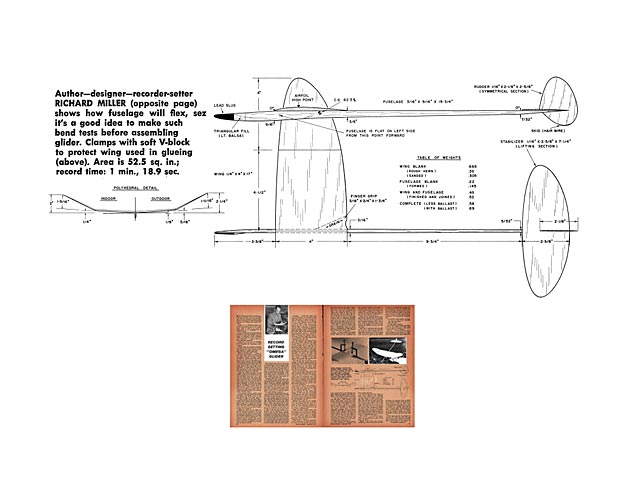 Quote: "The hand launch glider probably provides more pleasure per hour of building time than any other type of model. Simple as it is it provides an almost endless source of enjoyment as well as invaluable training for building and flying techniques.

Omega 2 is a high-performance machine for the expert. Yet it can be built by the advanced beginner as an outdoor glider. Most of what I say about its construction is as applicable to all chuck gliders.

A lot of really first class information is available on hand launch gliders so I will try not to repeat what already exists but rather to emphasize certain techniques which, with help from various sources, I have developed - things I have not seen mentioned elsewhere.

Take care. You get out of something essentially what you put into it. There is no substitute for painstaking workmanship. Choose tools and materials carefully. You can't do first rate work with second rate equipment. I make reference to spe- cific sources of supply and tools - these are not paid commercials.

Notes on Construction. Light, C-grain wood (I get mine from Sig) is best for wings. More flexible cuts, although less likely to shatter or splinter, cannot be leaded as heavily with filler and finish. Use the hard or heavy edge of the plank if there is one for the leading edge. If you cannot estimate this by pressing the wood between your fingers then stick a pin in the middle of each end of the plank and use the edge which rotates downward. I usually decide which surface to use as the top of the wing by trimming off bits of the wing blank near the tips to see which cut looks best.

When the blank has been cut and sanded to shape (and weighed) I do my initial carving with an X-acto knife using the #26 blade. After this I go to work with the Little Giant razor plane using fine cuts. Sanding next. I find production paper about as much an improvement over garnet paper as garnet is over ordinary sandpaper. It is also less expensive in the long run due to its extraordinary durability. A small source of light, such as a 15W bulb, at about the level of the work is a great help in achieving a well formed wing. This effective backlighting shows up all irregularities however small.

As I proceed I keep a careful record of weights (see plan) which (a) permits comparison with weight tables of similar gliders built in the past and (b) provides an index for future gliders. I keep working at the wing until it weighs what I think it should. The blank used for the wing of the record breaking glider began as 1/4 in balsa but since it was 5.3-lb stock (a shade heavy) it ended just a bit over 3/16 in at the high point of the base chord by the time I had it as light as I wanted it.

Filling the pores in the balsa, especially with wood as light as 5-lb stock can try anyone's patience. It can also consume as much time as all other build- ing operations combined - or so it seems. So if you're making anything but 'the ultimate' content yourself with a few coats of dope or sanding sealer. But if 10ths of seconds are important, you will want to leave no possibility for increasing performance untried..." 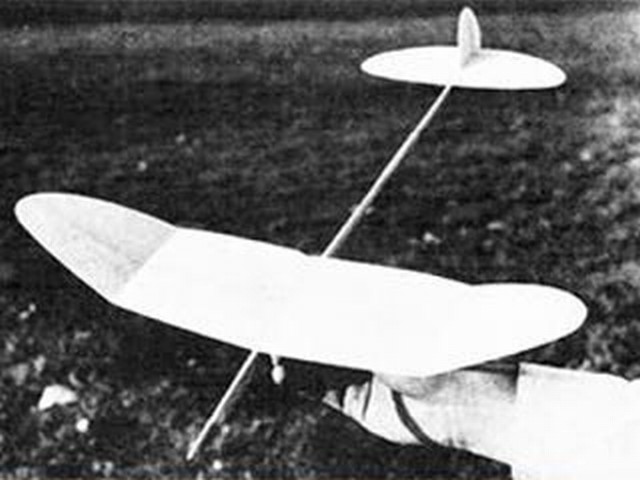