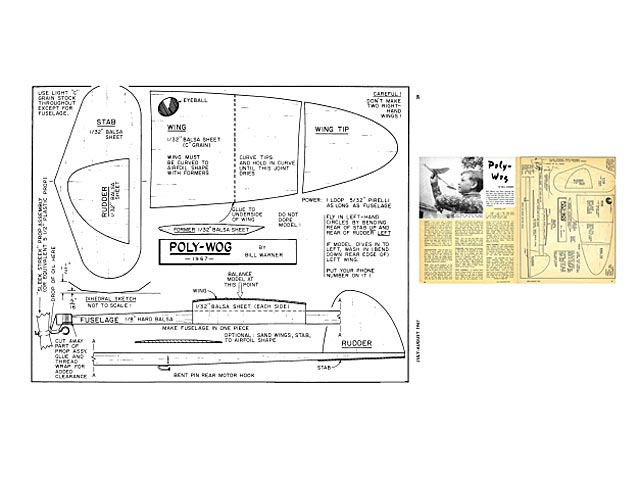 Quote: "Bill Warner has been amazing the big guys and pleasing the kids for years with this fun-type fighter. It's a fugitive from the dime store, using a Sleek Streek plastic prop assembly, but it shoots those ready-built's right out of the sky at schoolyard contests.

About seven years ago, I started developing this model. It had to have a lightning fast up-out-of-sight climb, be simple enough so any kid of junior-high age could build it, and cost less than anything else going. Many planes of this type have been built and flown by my junior high club, the Sepulveda Balsa Butchers. Flights of better than a minute are the rule, and out-of-sight flights are common enough to recommend putting your name and address on the plane. One Poly-Wog entered in an umlimited rubber event flew out of sight at 3:25 minutes on its first flight.

Construction: Glue the plan to a piece of heavy paper or thin cardboard. Carefully cut out templates for the wing, stab, etc. Do a good job on the wing, as there are slight curves where the wing parts fit together which must be there if your wing is to hold its camber (curved top surface).

Wing: Draw templates on the 1/32 sheet with a ballpoint pen and cut out. Sand an airfoil shape if you widh, but the airplane will fly pretty well without it. Glue wing formers beneath right and left wing panels..." 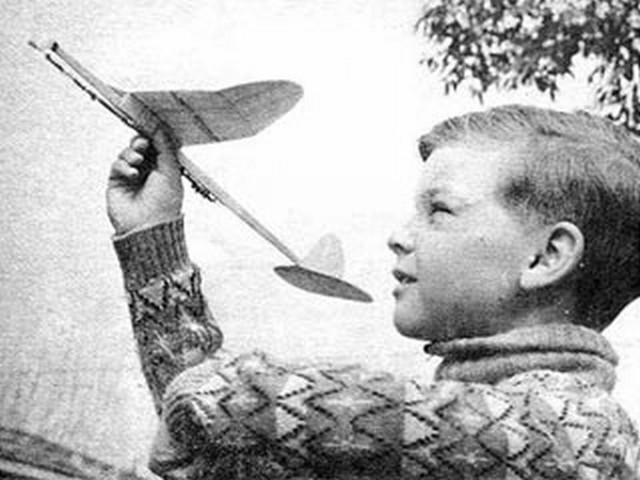