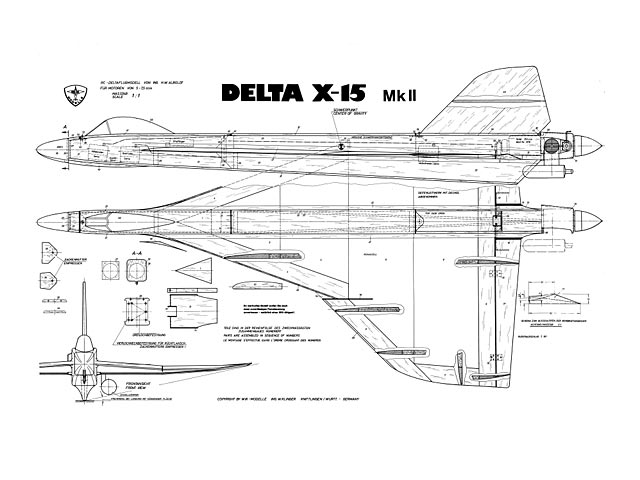 EVER SINCE visiting Farnborough many years ago and seeing aircraft such as the Fairey Delta FD2 and Boulton Paul PIII, delta-winged aircraft have held a fascination for me. A chance to review the Delta X-15 from Sailplanes International was therefore welcomed. It also provided something completely different from my normal run of model subjects. The Delta X-15 MkII is a 31-1/2 inch span narrow planform delta recommended for .29 to .45 cu in engines.

The kit is contained in an extremely attractive box which when opened reveals something of an unconventional nature in the form of the flat sheet Rohacell (blue foam) wing. Remaining parts are quite normal balsa and ply, with an ABS nose cone and engine cowl. Hardware provided contains all necessary nuts and bolts plus a neat mechanical mixing unit for the elevon operation. Also included is a full size plan and an English translation of the instructions.

Construction: Having read through the instructions to see if there were any peculiarities, building commenced. This is a simple model to build and is assembled by following the numerical sequence of part numbering, ie No.1 glued to No.2 and then to 3 etc.

Following this procedure, the first thing that takes shape is the wing itself, unfortunately though this also bought about problem No.1. On comparing the pre-cut pieces of Rohacell to the plan it became evident that slab No.2 was cut slightly too narrow. To rectify this a small strip of 1/8 in balsa was let in between pieces 2 and 3. Construction continued finally resulting in the complete Rohacell wing being surrounded by a substantial balsa framework. The next stage was to fit the elevon torque rods which involves fitting the centre piece come tank bay to the floor. Problem No.2 arrived here with the centrepiece No.13 being cut approximately 3/8 in too short, however, a trip to the scrapbox soon provided a new part.

Completing the wing requires the fitting of the spruce leading edges, temporarily fitting the elevens and final shaping as per the plan.

The fuselage is built up from three pieces of balsa together with half length ply doublers. Problem No.3 was encountered here as one of the fuselage side pieces was cut slightly too short. Again a relatively simple problem to rectify with the insertion of a 3/16 wide strip of balsa into the gap between the pieces. No further problems were encountered, the remainder of the construction taking place fairly rapidly.

To finish the model it is recommended that dope and tissue or nylon is used to aid structural strength. I had decided to use my Meteor 40 motor and considering there was no undercarriage I felt nylon to be the better bet. This was duly applied, decorated with a Car cellulose and then proofed with Tuf-Kote.

Radio installation: No problems were encountered here, there being ample space for most types of gear although an extension lead for the throttle servo will be required. It is also desirable to keep the gear as far forward as possible to balance the rear mounted engine. As no control throws are mentioned anywhere in the plan or instructions I used a set-up of approximately 3/8 in on all surfaces with the rates set to approximately 50 per cent. In practice I found approximately 1/4 in throw each way to be about right for the elevator movement and 3/16 in each way for the aileron movement.

Flying: After adjusting the C of G into the specified zone with approximately 4 oz of lead in the nose, a trip to the local flying field was in order. With a suitable candidate chosen to assist with the launch and a suitable warning given about pusher props the motor was duly fired up. I did not know it at the time but this was where my trouble really began.

The first attempt at flight resulted in the model literally standing on its tail, doing a pirouette until the engine finally stopped and a heavy landing followed. Thinking a poor launch was the cause of the first mishap, a re-launch was tried. This time the nose did eventually come down only to bury itself a foot deep in the next field.

Flight trials continued in this frightening fashion until a ridiculous situation was reached where there was no less than 8oz of lead in the nose in an attempt to cure what was thought to be a wayward C of G. At this stage the aircraft had become 'flyable' but was nonetheless a barely controllable, over-weight and very fast projectile. A rethink was required! I had fitted the 40 as it is always better to have an excess of power and throttle back for normal flying, but in this case the sheer mass of the engine was having to be balanced by useless nose weight, creating a classic and unstable 'dumbell' distribution of weight. Drastic problems require drastic remedies, so I went to the other extreme and fitted the smallest and lightest engine I had that was close to the power range.

It took very little effort to fit my OS 25 FSR in place in the Meteor, and this, together with the weight I was able to remove from the nose, resulted in the loss of a full one pound.

At the next session I am glad to say no problems were encountered. From the first launch the model went away smoothly and with slight adjustment of the trim I at last began to enjoy myself.

The model is extremely fast with a very impressive roll rate, although it is quite capable of being slowed down for an easy landing. All normal manouevres of an aileron-elevator model can be accomplished with ease, really large and smooth loops being a pleasure. The only thing to really watch for is not to lose your concentration as it is very easy to lose orientation, especially when the light is going or the model is getting a bit far off.

Conclusion: With the heavy engine fitted this was without doubt the most difficult and troublesome model I had flown, in fact at one stage I wondered if it would ever fly. It took a great deal of effort to get the model airborne and then a lot of concentration to keep it there. With respect of launching, in the absence of a tall (and long suffering) colleague to give assistance I can only think that maybe a bungee would be the answer.

With the 25 FSR fitted and an all up weight of approximately 4 lb it is a different model. I have now flown the X-15 numerous times without any problems whatsoever. It will go away from a normal hand launch without losing any height and has no vices, in fact it is just great fun to fly, having plenty of spectator appeal.

From the results obtained it can be seen that serious consideration must be given to the choice of engine. Messrs Sailplanes International advertise an engine size from 40-60. With my experiences I would suggest this may cause numerous problems, not least in obtaining the correct C of G position. In fact the manufacturers (Wik Modelle) suggest an engine size of between 29-45. I am sure even this would cause problems as I do not know of any of what I would call very light weight 45's and only possibly one 40 (HP). It is also evident having flown the model with both 25 and 40 power there is little performance to be gained from fitting the larger engine.

Summary: A nice looking model, easy to build and from my experience with a nylon finish it is extremely strong. There is no doubt that it is a model for the experienced flyer as even with the 25 motor fitted (albeit a good one) it is extremely fast. As for the building problems encountered I am assured by the importers that these are being looked at and will be rectified in future kits. I feel I must also mention that Messrs Sailplanes International have been extremely helpful in trying to offer assistance in sorting out all of my original problems.

If you fancy flying one of the fastest and most striking models on your field and you have a reasonably light motor on the shelf then do try the Delta X-75." 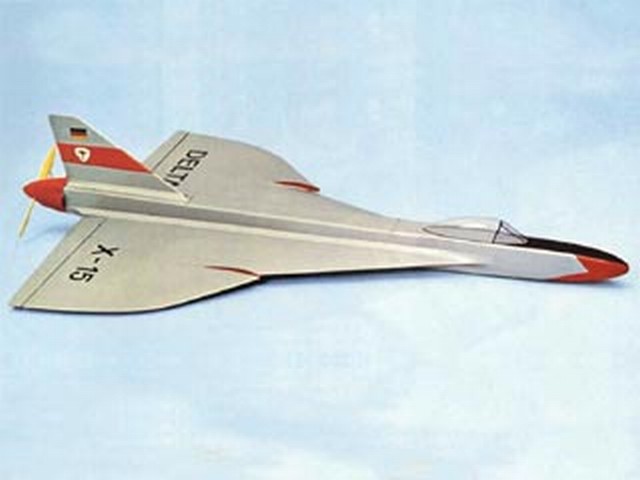