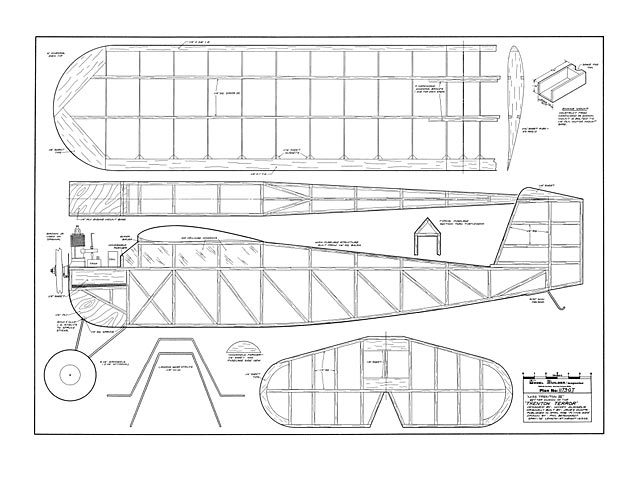 Quote: "Featuring an Old Timer plan in each issue of Model Builder is a tradition that was begun early in the magazine's history, and the Trenton Terror was one of the first. That was back in November of 1973, or 185 issues ago. Many of you readers have joined us since then, so we're reprinting the plan this month for those who missed it the first time around.

The Trenton Terror originally appeared in the April 1938 issue of Flying Aces. Actually that’s not the model's real name; Mickey DeAngelis, who designed the ship, was a member of the Trenton Gas Model Airplane Club and was himself known as the Trenton Terror by his clubmates. When he designed this particular model it was Billy Giblin, who drew the four-page plan for Flying Aces and who has the distinction of having played one of the Munchkins in The Wizard of Oz, who suggested calling it by its designer’s nickname. It's been called the Trenton Terror ever since, even though the name Miss Trenton lll appeared on the original magazine plan.

Barney Onofri, another member of the Trenton club, built the prototype Terror, which proved to be such a good performer that soon a dozen or more were built by fellow club members. The only hitch was that there were only a couple of Brown Jr engines within the entire club's ownership, so they devised a novel interchangeable power package that gave everyone a chance to fly. Engine and ignition system were mounted on a common base, the whole thing being fastened to the nose of each model by a single bolt. After you made a flight, a minute's work with a screwdriver was all that was needed to get the power unit out of your airplane and into your buddy's. Our plans show this same type of engine mount setup. Today's builders will probably want to modify this though, either by raising the existing 1/4-inch plywood plate to just under the upper longeron, making a cutout for the engine and mounting it directly to the plate; or by doing away with the plate altogether and installing hardwood beam mounts.

By the way, both Mickey DeAngelis and Barney Onofri are still active modelers, Mickey being involved in the SAM 100 club - see this month's Plug Sparks column for a report on that club's doings. We'd like to thank Carl Hatrak, a longtime friend of Mickey DeAngelis and another former member of the Trenton Gas Model Airplane Club, for providing us with much of the preceding information about the original model and its designer.

The Trenton Terror in the Photo was built as a F/F ship by Marge Bernhardt some twenty years ago and featured the same trim scheme as the original. Power was an Ohlsson .60 sideport converted to a front rotor, which was really more power than the model could handle safely. The gadget on the side of the fuselage below the windows is a specially modified clockwork timer, good for up to an hour, that would open a trap door and release a DT parachute, which made for a much gentler (if not quite as positive) descent than the normal pop-up stab.

The airplane is still active today, being flown as an R/C model by Ed Houston, past president of SAM 49, the Los Angeles area OT R/C club. Ed flies it in Texaco with a Saito .30 four-stroke. For R/C, the flat tail surfaces and the fact that the horizontal stab already has a V cutout for the rudder, make installation of control surfaces as easy as you could want. Just lay in an extra 1/4 sq spar parallel to and aft of the existing spar in the horizontal, and forward of the one in the fin.

No balance point is indicated on either ours or the original plans, but a good starting point would be about halfway between the fore and aft wing spars." 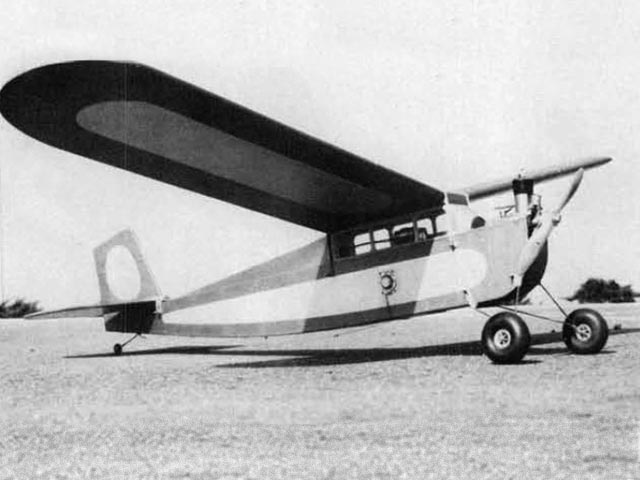 I built a Trenton Terror from Model Builder plans, back in 1996. It's a very easy airplane to build, and it flies very nicely, but future builders should substitute 1/4" balsa for much of the plywood used in the front end, because the the TT actually tends to be nose-heavy with all that lumber up there. My TT has the radio gear installed at the extreme aft end of the cabin, and the center of gravity is still too far forward. Adding material to the rather flimsy tail surfaces will also help with this problem. My airplane weighs 48 ounces and the old OS .20 two-cycle takes it to altitude very quickly.
Moeregaard - 11/05/2013
Just some interest for the Trenton Terror. Originally built from a Ben Buckle kit back in 1992. I have removed the old OS Max 35 and replaced with an Electric (AXi 2820/12 990kv), 11x5.5 prop and a 3S 2200mA. With plenty of room to install the modern gear. Balance point comes out perfect just under 25 mm behind the front spar [pics 003-006].
Top tip: Double up the ribs, or similar, where the wing under camber is and use Balsaloc (or similar). Else the film will not stick well.
MarkS - 15/11/2020
Here's a photo of my Trenton Terror [pic 007] at rest on the snow in the early 1970s. It was built from Model Builder plans, covered with silkspan and dope, and powered by O.S. Max .20 (2 stroke). It had a "Skyleader" (UK) R/C system controlling rudder, elevator, and throttle. It had a very light wing loading and flew exceptionally well. With those big Trexler wheels and undercarriage so far forward, if you ran off the runway into the taller grass (stubble) at the edge of the field - its was a simple matter to taxi back - or just take off again!
ChrisMoes - 23/11/2020
Add a comment