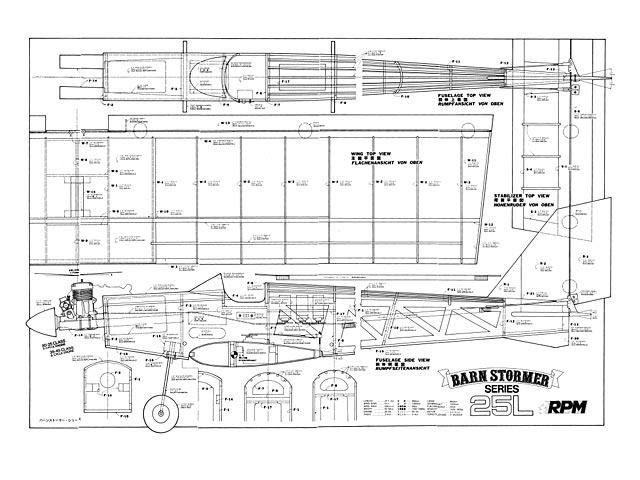 ONE OF the primary quests of the sport flier has always been the search for the fast-building kit. There have been, and are, many available, but unfortunately most are candidates for the slab-sided 'Mr Boxy'" contest. The RPM 25L - and all the Barnstormer line distributed by Varicom Industries - brings better looks with faster assembly. This is accomplished with the use of interlocking notches on the fuselage sides, bottom, and formers. Notched leading and trailing edges on the wing, stab, and fin are also to be found. In other words, there are so many slots and keyways that the final product is not only arrived at with alacrity, but the chances of misalignment are greatly reduced.

I guess the Barnstormer series might be compared to an extremely simple jigsaw puzzle, the difference being that you know in advance where the pieces go, making it no puzzle at all. The open, antique look of the 25L leaves you with the impression that much more time was spent on the building board.

My 25L, with the aid of Zap glues from Pacer Tech, was ready to go in four evenings and weighed 3-1/2 pounds.

These models get their beauty, strength, and weight (or lack of it) from lite-ply fuselage sides and bottom that have all those open bays you see in the photos already cut out for you. The round top is formed by five spruce stringers. The wing, which is also utterly simple to build, with its prefab notches and all, has a time-proven feature, a turbulated airfoil. In between the leading edge and the spar is a sub-spar top and bottom, giving the airfoil a secondary high point or 'bump' at this location. Models having this feature, and there have been many, display very good stability at low speeds and are the type that really 'hangs in there.' This gives the novice or the nervous modeler that all-important second chance. Incidentally, both Frank Tiano and I agree that our good friend Richard 'Burt' Uravitch, who is a gifted builder but is often nervous on the sticks, should give this one a try.

The only piece of hardware I didn't use from the kit was the aileron torque rods. I just felt more at home with the Du-Bro rods. The radio I used was Polk's Modelcraft Hobbies Hi-Tec Challenge 620 6-channel.

I've flown the system many times at Floyd Bennet Field in Brooklyn, New York. This location is infamous for having some of the most electronically "dirty" air in the country, a true proving ground for the radio.

I've taken the 25L up so high, it was nothing but a red spot in the wild blue, then I flew the plane very far out and very low to the ground, an even bigger no-no. The only no-no's I came up with were no interference, no glitches, no nothing except an apparently very strong link between me and my model. I kid you not, this radio works! I understand Polk's will soon offer a ball bearing servo.

Now what kind of engine do you think I'd put in a model from a barnstormer series? Of course - a four-stroke. The Webra T4-40 you see in the photo is the latest version. The carb has been moved to the back, even with the backplate, which is much better for lining up with the tank, and the exhaust is also more conventionally located on the side.

The Webra four-strokes all have a horizontal cylindrical rotary-valve instead of poppet valves. You never need to worry about valve float with this setup, so normal four-stroke rpm limits don't apply here. Although not the most powerful engine in the .40-.46 size, the T4-40 did show good power, particularly on smaller props such as a 10 x 7. The T4-40 was, however, top drawer when it came to handling qualities and idle (2,200-2,400 rpm) and has impeccable throttle response from a dead idle to high speed.

So far I've had no dead sticks due to flame-outs. The little engine responds instantly to the electric starter or only took a couple of flips by hand, after choking, to come to life.

Other pluses are low weight (13.4 ounces with muffler) and simplicity (only three moving valve train parts). All tests were done with a Jo-Z (Zingali) four-stroke plug, which seems to work very well with four-strokes. The entire Webra line, including parts and service, is exclusively handled by United Distributors, an authorized US distributor. For further information contact Jerry Goertige at the address listed at the end of this article.

FLYING. And now for the fun part. The Webra came to life immediately with the first touch of the electric starter. The 25L has no steerable tailwheel but the addition of one would be a simple matter.

I set the model on the grass and let her rip. The 25L with its vintage wheels handled the rough grass very well. This setup is a bush-pilot's dream come true. The 25L climbed out in a very stable, manner. It did become apparent the model was a little too nose-heavy, making the elevator less effective than desired. Since the 25L will fly well, and balance correctly with a lightweight .20-.25 two-stroke, the .40 four-stroke did make the model slightly nose-heavy. Instead of adding tail weight, I moved the battery pack behind the servos. Subsequent flights of the 25L brought no surprises.

As expected, the symmetrical turbulated airfoil remains effective right down to a veritable crawl. There was, however, a very welcome surprise in store for me. Unlike other models I've had with this type of 'lifty' and forgiving airfoil, the 25L will snap-roll and spin on command. Why the model does this while retaining its low speed, trainer-like properties, I've not yet ascertained. Any theories are certainly welcome.

Outside maneuvers were also quite good, with inverted flight being a forte with only slight down-elevator needed. Knife-edge did require a bit more down-elevator to keep on a straight line. All in all, the aerobatic capabilities of the 25L were an unexpected plus.

So if good looks, simple construction, and a downright cheap price tag sound as good to you as they do to me, the 25L from RPM is the answer. Oh yes! If you cover this bird with anything except one of the translucent films, personally I think you're nuts!" 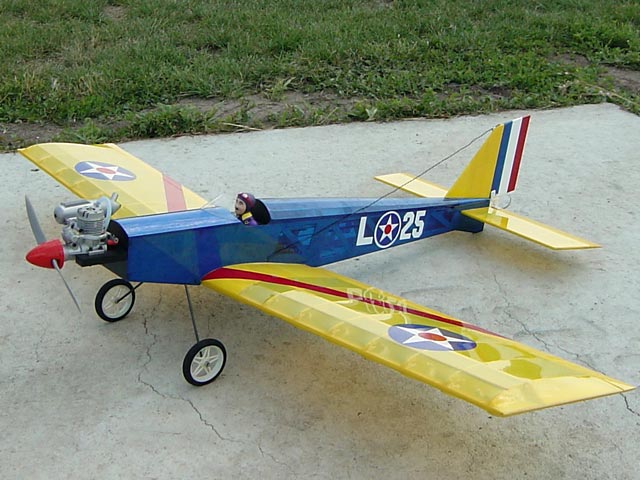 Hi, Steve. Back in 1986, I built one of these from the kit and powered it with an OS .25FSR. The kit quality was typical of the Japanese kits of the time, i.e., phenomenal, with excellent wood and crisp die-cut pieces. Mine was a complete can of worms on the ground, and the lack of a steerable tailwheel only made matters worse. Once in the air, it was a very lively performer, but I had my hands full when it was on the ground, even on grass runways. I would suggest moving the main landing gear back, so that it's barely forward of the wing's leading edge, and incorporating a steerable tailwheel. Apart from these improvements, I wouldn't change a thing. It's just a great small-field model. Regards,
Moeregaard - 23/12/2013
Noticed there wasn't a pic for the RPM Barnstormer. Here are some ooold pics of the one I built in the mid '80s [more pics 003, 004]. Absolutely one of the best flying machines I've ever had the pleasure to fly. I will be building one for floats soon!
MikeB - 31/08/2016
Hi Steve, Great website, thanks! Here are a couple of pictures of my 25L [model pic and 005, 006]. I built it from a kit about 10 years ago. It was an excellent kit and fun to build. It is also a great flying 4 channel model.
DavidLHammond - 11/12/2019
Hello, what dimensions should that plane have for an OS 10 engine?
Thank you
Diego - 11/04/2020
Add a comment