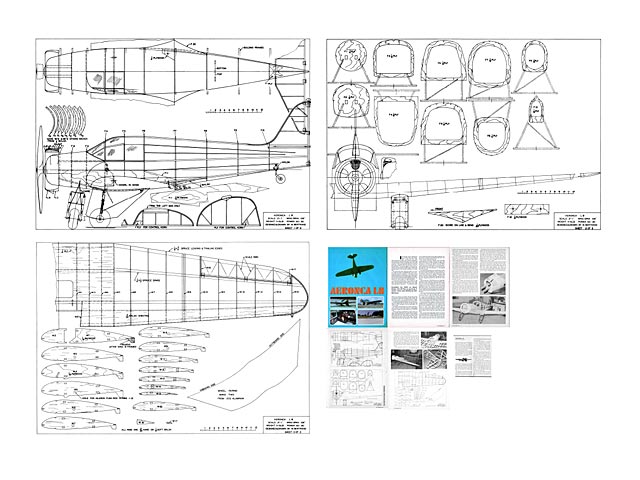 Quote: "Excellent for AMA or Sport Scale, the LB flies as good as it looks. Aeronca LB, by Bill Bertrand.

I first thought about building the Aeronca LB for RC Scale in May, 1969. At that time Paul Matt three-views and an article on the Model L appeared in the AAM. When I saw Paul's drawings, I knew that I had to build this ship, It had such pleasing lines and good moments. I had always liked this ship and I had even built rubber models of it from 10c Comet kits, back in the late thirties. I was in the middle of constructing my Fokker D Vll and had the Handley Page V 1500 on the drawing board, so the Aeronca would have to follow that.

The Aeronca has many things that make it an excellent subject for AMA or Stand-Off Scale. It has a semi-symmetrical airfoil for aerobatics; its all fabric covered for lightness and has a radial engine with a speed ring in which a model engine can easily be hidden. The cabin is easy to see into so that the interior detailing doesn't get passed over, like it might on a high-wing design.

As most of my friends know, I like to build my scale ships large and for good reasons. Large models usually draw a lot of attention just by their size, and a large scale ship does so even more - we all like the other fellows to scrutinize our models. The big ships also fly so much more realistically than the smaller models. The big ships fly easier, too - everything seems to happen much more slowly, giving the pilot more time to think.

I have been flying large models for many years now, I have had people walk up and tell me that they had come to a NATS primarily to see my big Fokker (1/4 size) fly again.

This ship is presented here as an AMA Scale effort, and it is drawn to exact scale. However, I could suggest no design changes that would improve it for Stand-Off Scale.

I make my living as a draftsman so, when I draw up a ship, I usually spend about a year of lunch hours doing it rather than drawing at home. While I started drawing the Aeronca LB in 1971, the actual construction wasn't started until the fall of 1972. At this time, I had not found a full-size LB to copy. By January, 1973, I had the structure all built and got serious about finding an LB. I found an LC in California, but didn't like the cowl - the LB has a much cleaner looking cowl.

Then I found a 1936 LB in Indiana, which had been disassembled and in storage for about ten years, The owner, Mr R Frost, was very cooperative in helping me get pictures of all the parts and he came up with a couple of pictures of the ship before it was dismantled. After taking pictures of the ship, I found several minor discrepancies in the AAM drawings, ie the diagonal ribs in the ailerons.

I am showing the drawings for a model that is scale, but not the fine details needed for AMA competition. If one wants to make a full AMA scale model of this ship, he will have to find all his support information and pictures to detail his ship accordingly. A ship this old will have had some modifications through the years, plus they changed somewhat from time to time in the factory.

I took my LB to the '73 NATS before it was completely finished (it still isn't) and with some things rushed to the point that I wasn't at all happy with them. My landing gear was one of these things and, in my haste, it was installed an inch too far forward, making my ground handling very bad, This along with very strong winds (90° to the runway), cost me most of the points for my takeoff, landing, taxi and touch-and-go on every flight. In spite of the poor ground handling, I still ended up in 9th place.

I since have moved the gear back and added 2° toe-in to each wheel; now the LB handles like any good two-wheeler should. I didn't get to the NATS this year, but I went to the Canadian Nats instead (100 miles versus 1000 miles) and ended up in second place in FAI Scale. The model also had the distinction of taking third in static Scale judging at the 1974 Toledo Conference.

To start construction, begin by cutting out all the fuselage formers (F1 through F10). Trace all the formers and ribs onto tracing paper so as not to destroy your plans (or buy two plan sets). Be sure to use plywood and spruce in each place where specified - this is important, All spars and stringers are spruce, Take each former and tack glue the frame to it (as shown on the plans) and be sure to mark the center line on each frame.

Next, laminate the leading edge of the fin as well as the trailing edge of the rudder. These both can be done at the same time, then separated after they are dry..."

Quote: "Hi Steve - Here is Bill Bertrand's Aeronca LB from RC Sportsman magazine issue 11-75. I mirrored the wing plan to facilitate a build of this beauty and included the full text." 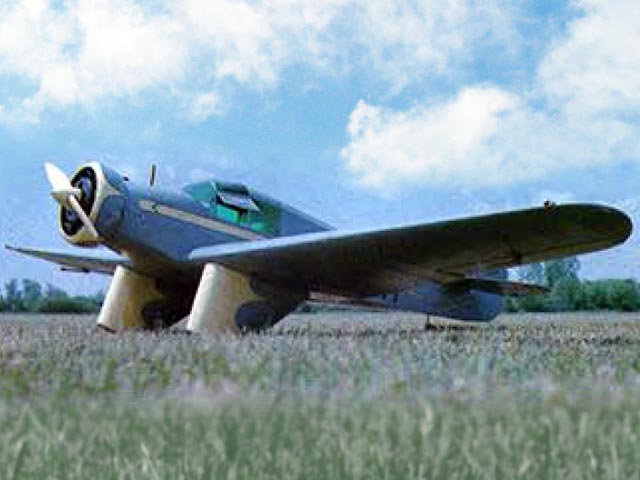