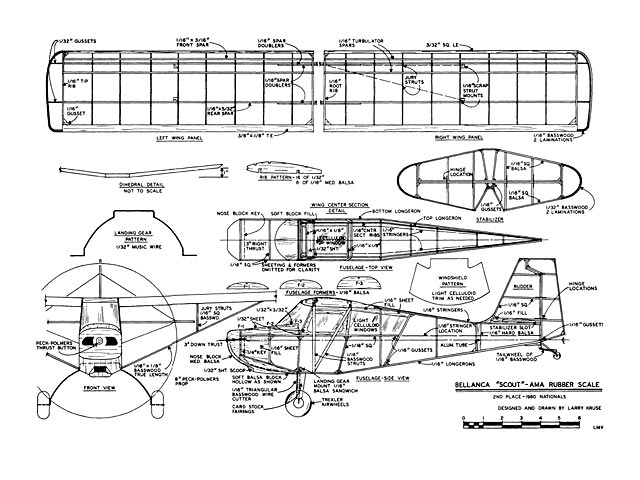 Quote: "A stick and tissue rendition of an enduring Iightplane favorite. For Rubber Scale events. Bellanca Scout, by Larry Kruse.

If you think the Bellanca Scout presented here looks a bit like a Citabria in agricultural clothing, you are right - there is a relationship. With specific modifications to suit various purposes, this multi-faceted design can also show up as the Bellanca Champion, or even the Decathlon, flagship of the Bellanca line of high wing aircraft. In fact, the Scout can trace its heritage back to the beloved Airknocker of the '40's as a testament to its longevity and versatility.

The Scout first caught my eye through a full page ad in an issue of Flying magazine, which appeared a year or so ago. Noting the attractive proportions for rubber scale, I wrote to the home office in Alexandria, Minnesota, and asked for any material they might have on the ship. I have a notion that a modeler must have answered my request, because within a week I received a 3-view, a 4-color rendering of the Scout, an interior cockpit view, a 5 x 7 glossy, and a color slide. Holy mackeral! Instant documentation! Such material is not often that easy to obtain. I immediately telephoned my thanks, narrowly missing slobbering into some secretary's ear in my excitement.

However, 'Tempus fugit' they say, and sure enough - it did. After my initial excitement abated, I filed the material away with the rest of my documentation stuff and nearly forgot about it. To be absolutely truthful with you, I did forget about it until about three weeks before the 80 Nats. While I was frantically trying to throw something together to take the place of the half-finished Fletcher that still resided on my workbench, I rediscovered the Scout.

I used an opaque projector to blow the thing up and drew the plans in one evening. I began building the next. My aim was to sacrifice a few scale points to the time schedule which had somehow eluded me, and to quickly come up with a good flying aircraft. How well that aim was satisfied was answered in the 1980 Nats. The Scout placed second, barely edging out Don Srull's beautiful Gloster Gannet (oz9345). Its forte is flying, which we'll deal with a little later.

Construction Notes. All wood sizes are standard, but you'll hasten the building process considerably by pre-forming the wing and stabilizer tips. Cut several strips of 1/32 in basswood to 1/8 in width and soak them in hot water laced with about three tablespoons of ammonia. When the strips are suitably pliable, wrap them around scrap balsa forms covered with Saran wrap or a similar kitchen wrap. Use a white glue as the bonding agent and keep the strips pinned to the building board at least 48 hours. I used to pull them off the board after 12 hours or so, but then found that warping tended to occur sometime later, due to inadequate drying time. While the wing and stabilizer tips are drying, your time can be well spent on the fuselage.

Wood for the fuselage longerons should be selected carefully to avoid the pulls and sags that can occur from the use of too soft stock. Since the plane is fairly large, yet uses 1/16 sq for fuselage construction, make sure the longerons are medium hard A grain. The vertical pieces and crosspieces should be cut from medium hard C grain. The stringers may be of lighter weight A grain.

Lay out the fuselage sides one on top of the other, separated by a layer of Saran wrap. Gussets should be installed as the sides are built, except for the juncture in back of the wing..." 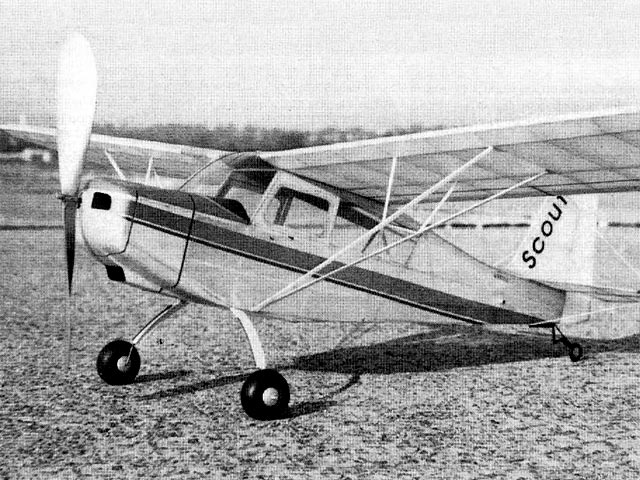