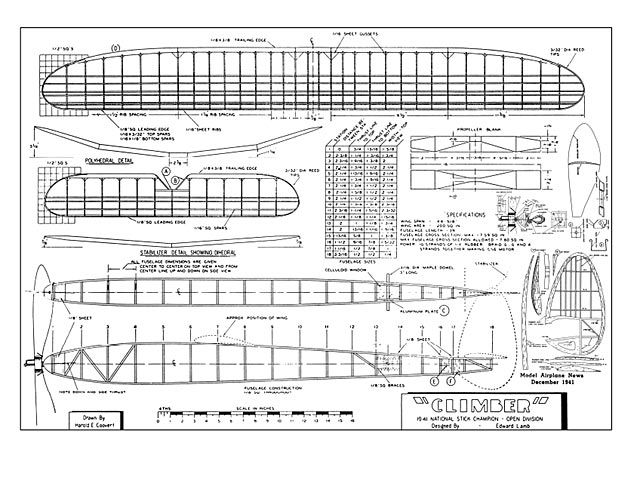 Quote: "How to Construct the Winner of the 1941 Nationals Open Division Event Which Flew for 1002 Seconds on Three Official Flights By ED LAMB

THE Climber was completed at 4 o'clock the morning of the 1941 Nationals at Chicago; however, it is far from being a ship that was thrown together in a hurry. About a month before the Nationals plans were drawn up for the model and before my brother and I arrived in Chicago, the wing, tail section and propeller were completed the fuselage was built the two nights previuos to the contest.

We believe that this model's outstanding feature is its tremendous climbing ability. At the Nationals it had one flight of over seven minutes and another of over eight minutes, before going out of sight of the timer's stand. On both of these flights it landed about ten miles from the field. The total for the three official flights was 1002 seconds. In evening flying, the plane has been averaging over three minutes a flight.

Construction. The fuselage is constructed of 1/8in hard balsa; the easiest method is to con- struct the two side sections first. Cut the longeron strips to right length and pin them on a board to the right shape, then cement in the crossections as shown on the plans. After both sides are completed arnd identical, cement in the top and bottom erosscetions, starting at the middle and working toward both ends. After all the crossections for top and bottom have been inserted, glue in the braces and 1/8in sheets as shown. The tail section is detachable and should be constructed separately.

The wing has an area of 200 square inches and is built in the usual manner. The three center sections are made in one piece and the two wing tips made separately. After the center section ribs have been cut and sanded to the same size, place them in position using the leading edge..." 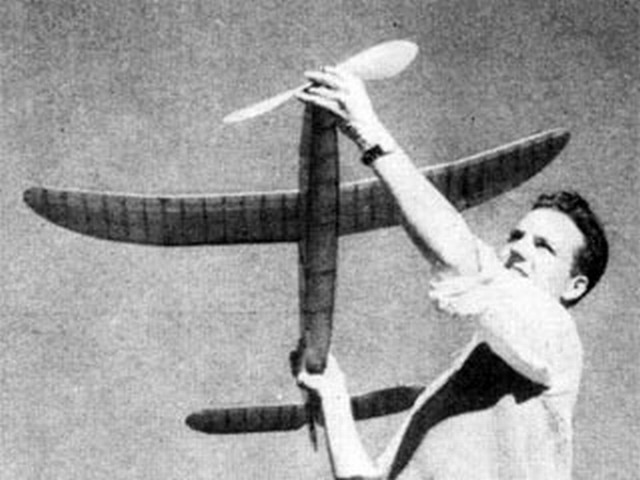