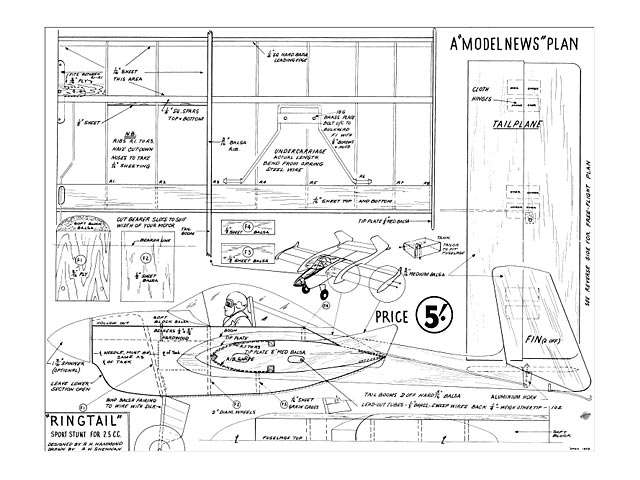 The Ringtail and Binatang (oz2275) plans both appeared in the same short article in Dec 1959 Model News.

Quote: "Ringtail is an out-of-the-rut stunter which should be suited for general stunt work, or in simplified form as a combat ship. We recommend the popular O.S. .15 glow, or any similar engine.

Ringtail is fairly simple to build, and can be built in a few nights - certainly from one weekend to the next.

NOTE: All left wing ribs have lead-in holes cut in.

Commence building by cutting out all wings ribs from material stated, taking note of the thicker ribs under booms. Build wing in one piece by cutting off bottoms of all ribs first. When leading and trailing edges are in place, lift wing from plan and cement other segments of ribs in place. Allow to dry and then finish bottom half with other spar, trailing edge sheet, and then fit bellcrank and wire connectors, threading push rod in through trailing edge slot. The leading edge can now be sheeted with 1/16 and the whole wing sanded smooth.

Cut out formers, fuselage sides and assemble, spacing bearers in formers to suit the motor you intend to use. Slide fuselage over wing and cement in place. Cut tail surfaces and booms, sand to shape and assemble elevator and control horn. Cut tip plates and sand to shap. Dope all these parts with clear dope and talcum powder to a smooth finish. Mount undercarriage to former 'A' through holes previously drilled - (when cutting bearer slots) mount tank, motor and block top; sheet bottom with 1/16 (across the fuselage) not along. Do not mount canopy yet; assemble booms and tail surfaces; fit tail skids, weight right wingtip with small lead weight, and then give all parts of aircraft a good sanding. Paper wing and fuselage too, give three coats of clear dope only, and then mount booms to wing. Lock booms to ribs with pins driven deep from the top. If possible, without slackening paper, scrape through paper in places over the rib so that cement can bond rib to boom. Cement on tip plates, stabiliser and elevator, and lacquer and/or enamel to your favourite colour scheme.

Mount pilot and canopy, wheels and fairings, prop and spinner. Use silk to bind fairings to LG legs, and dope heavily. When Ringtail is painted, give entire plane a coat of fuel proofing clear enamel. Original aircraft was designed around K & B .15 and O.S. .15, but from 1.5 cc to 2.5 cc should prove capable of carrying Ringtail. "

Quote: "Ringtail as requested on your wanted page." 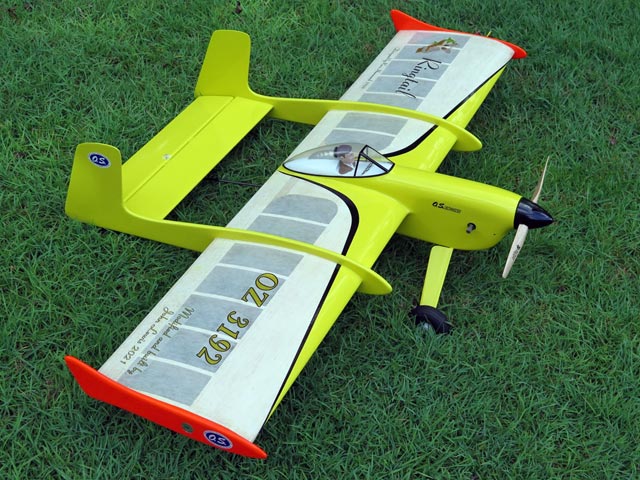 Hi Derick Scott. Many thanks for this plan. Thank you.
Gary Button - 10/05/2013
I downloaded the Ringtail (oz4342) from your Website. I made two of these when I was a teenager. They were both powered by a Taipan 1.5cc diesel at that time. I found my old brown paper drawings when going through my old Control line plans and with a bit of research found the design on your website. I decided to have it scaled up (145%) and am using a OS LA 25 for power. Anyway some photos for you [main pic, 004-007].
John Lewis - 07/05/2021
Add a comment