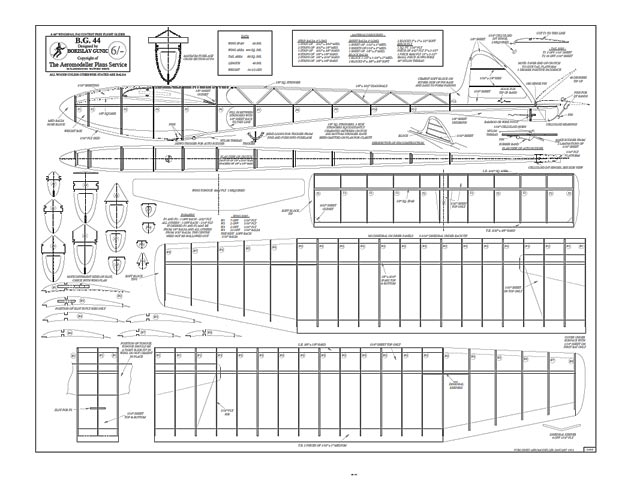 Quote: "ENTHUSIASM and originality of design have marked the progress of post-war Yugoslavia's model movement. It was therefore no surprise to those of us acquainted with this movement when Bora Gunic carried off top honours at the 1952 A/2 sailplane contest.

Gunic originally flew the familiar long-straked-fin models that we first saw at Eaton Bray when the Yugoslays came over in 1950, eventually breaking away from this design trend with the B.G.43. This prototype, although the forerunner of the B.G.44. had a much shorter moment arm, consequently using a larger fin and tailplane. Wing section was NACA 6409. The B.G.44. was incidentally only finished one month prior to the Graz contest.

Construction. It should hardly be necessary to say that this is not a beginner's model even though we have taken the liberty of slightly modifying the construction of the fuselage in order to simplify building.

The prototype used full ply formers, presumably jigged for building. These we have divided so that the fuselage can be built by the crutch method.

With the wings complete apart from covering you can now start the fuselage. Take your choice as to whether you use ply or balsa formers; the latter facilitate building, and are just as strong for the purpose, they also cut easier. Pin down the crutch and build the lower fuselage portion upside down on the plan..."

Quote - "January 1953 Aeromodeller... the BG44 is an A2 sailplane by Bora Gunic. Bora, from Yugoslavia, flew this design internationally with success and it was the culmination of a design philosophy going back a number of years. The only hindrance to this design turning in good times would be, I imagine, the skills of the flier. If you do decide to build from my plans please take care and measure carefully." 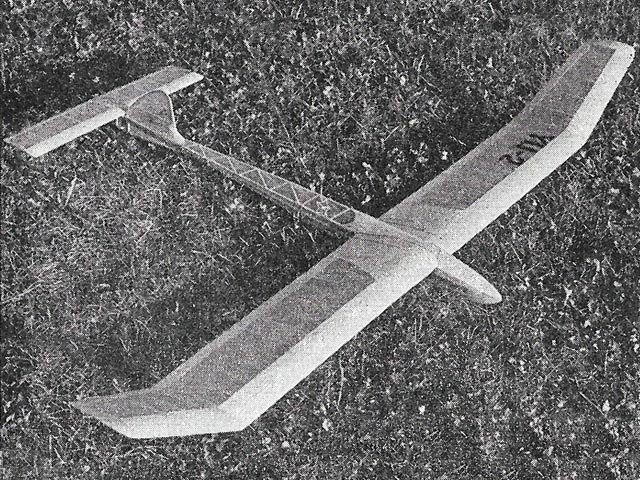 I build this model from the drawing in Aeromodeller back in the ... 'ies. On its maiden flight at +- 10m it flew away at walking pace without losing height and landed in the trees some 400 meters later. Apart from its looks I consider it to be an exceptional design and if properly built could still compete with current models.
Anon - 06/09/2016
Add a comment