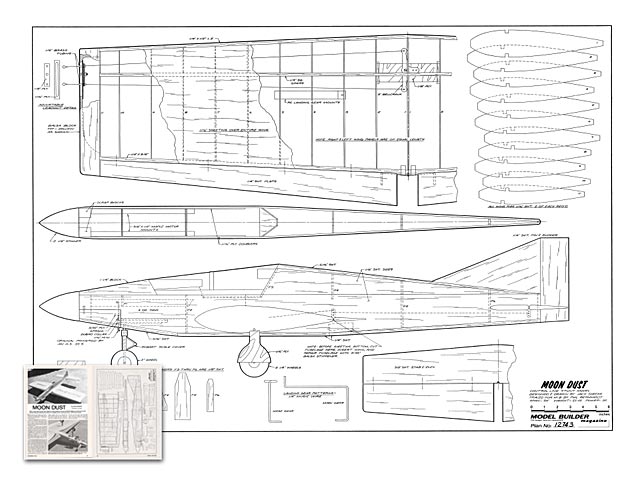 Quote: "Clean, out-of-the-rut lines are a feature of this model by the most prolific designer of control line stunt aircraft. Ship also features the choice of a sheeted foam or built-up wing. A .35 will do the job.

What do you do when you have a Custom stunt engine and nothing to put it in? No, you don't punt - you draw a ship around it!

Big Art Adamison had reworked a new OS 35 engine for me and we were hot to trot to use it. This man really knows engines, and if you need a good one, write him at 22454 Fairfax, Taylor, Michigan 48180. Anyhow, I couldn't see just letting this jewel sit around gathering dust, so I wrote to Foam Flite, got a very fine wing, got the drawing board dusted off, and began.

The basic design you see was snitched from a homebuilt aircraft we spied in a magazine. It was changed somewhat in order for it to conform with stunt moment arms, but the final result wasn't too shaggy looking, so I'm told.

As far as we could determine from the article, the ship hadn't been named yet. After pondering long and asking all who were interested, we settled on Moon Dust. Why? Well, my sons and I rooted for a race car with the same name at the local drag strip which we thought was a sharp looking car. The driver didn't win, but the name stuck with us over all the others. Well, it's better than calling it 'Fred,' isn't it?

The wood we found to build this ship wasn't the best, so it picked up weight rapidly. This is a No-No on stunt models. Some say that because of the balsa shortage that this wood was some they floated the good stuff over on! But you use what you can when you're rarin' to build. No sweat tho, cause the engine proved it would pull 60 oz very well.

Later, after a slight accident, the ship gained more pounds and a larger engine had to be installed. That's another story, and I never snitch on myself. We still don't know how much the ship weighs now - we're afraid to weigh it. Our scales are delicate, you know. Besides, most guys feel my scales won't weigh a ship over 42 oz. That's one way to keep them light.

After going to a larger engine (46), we also used longer lines. This helps the heavier ships have more time and space to turn in - it also makes them fly smoother. Mike Duncan now has the ship and puts in 20 to 30 flights a week with it and he doesn't look too bad with it either. But everyone who has flown the ship feels it would really be great if it were lighter. They're right too, for weight makes the difference between having a good stunter and having a great stunt ship.

So if you like the Moon Dust, think light while building it and we feel you will have a winner.

The construction of the ship is quite simple and is made even simpler by using a foam wing from Foam Flite. Their address is: 628 West 6th, Mankato, Minnesota, 56001.

If you would rather build your own wing, cut the rib patterns from plywood or aluminum, sandwich the correct num-ber of pieces of 1/16th balsa between them, and carve the ribs out. Build the wing halves in two equal sections.

Place the ribs on the lower wing spar over the plan, pin and glue each one. Then glue the top spar into place. Make sure the rear of the ribs are blocked up so they are centered. Now glue the rear 1/16 balsa planking into place, along with the leading edge.

Next, build the second half of the wing, and when done, join the two panels in the center with the 1/8 inch plywood bellcrank floor. Install the bell-crank, lead outs, and push rod. Next, plank the entire wing, making sure there are no warps. Install the landing gear mounts in the wing with 5 min epoxy..." 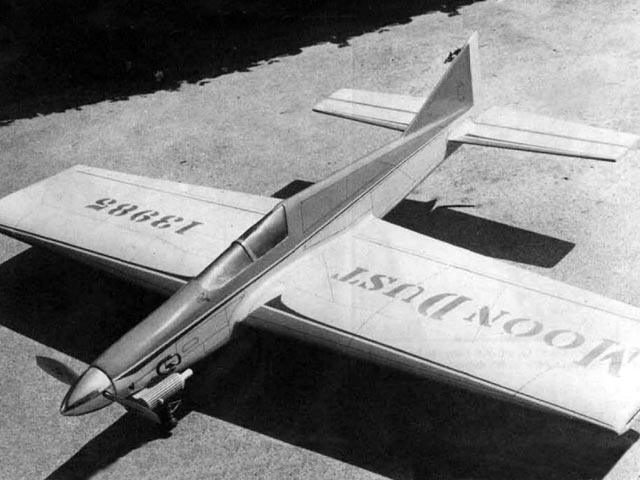