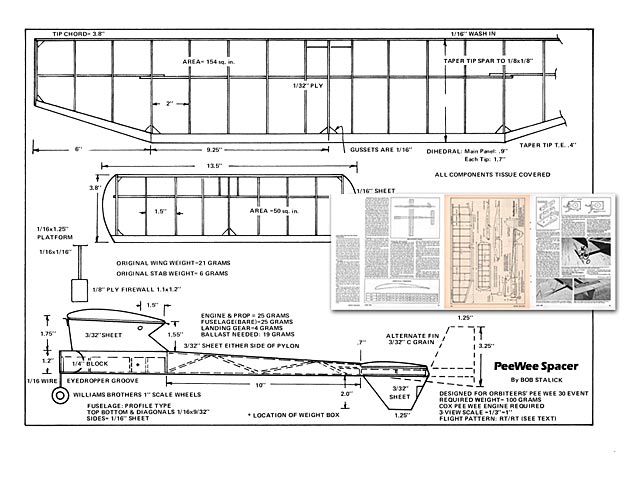 Quote: "JUNE THREE-VIEW: PEE WEE SPACER by Bob Stalick. The Pee Wee Spacer came about as soon as I had a chance to read the new Orbiteer's rules for the Pee Wee 30 event. Gone were the all-balsa rules; in were the weight rules. And, to top it off, all the designs that had been developed and published to date were all-balsa types. This meant that I could experiment with reduced-sized versions of some of my favorite models; 30-inch Ram-Rods, 95-percent 1/2A FuBars, and the Pee Wee Spacer. I had an old Pee Wee from a plastic model, and the balsa was easily found in the scrap box. I drew up the plans one evening and began building the next.

If you have ever built a regular Spacer, this one is exactly the same, except for the profile fuselage.

The Wing: The wing is really straightfor-ward, except for a slight bit of wash-in, more about this point later. The wingspan is slightly oversized in plan view, but with the dihedral and polyhedral in place, the actual projected wingspan is right at 29.75 inches. Wing ribs are 1/16-inch sheet C grain. Ply-wood gussets (1/32-inch) are used at the leading edge dihedral breaks and where the main spar joins at the wing center. A 1/16 by 1/4-inch wing platform support is glued into the leading edge center section bottom. If you look at the wing rib pattern closely, you will see that the tip ribs are out-lined in dashed form. The tip spar location is forward of the wing spar location in the main panels - just like on the original Spacer.

One of the shortcomings of the original Spacer is the slightly flimsy wing construction technique. The same feature exists in this version. If you want a stronger wing structure, I would recommend that you sub-stitute for the 1/8 by 1/4-inch main spar 3 x 3/32-inch square spars. The location of these spars would be top and bottom in the same spot as the main spar. The third spar would be located approximately one inch behind the leading edge on the top of the airfoil.

The Stab: The stab is also straightforward. All ribs are 1/16-inch sheet just as in the wing. The balsa sheet tips are laid flat on the bottom of the stab, and the spar is feathered out about midway into the tip sheet. The two fake ribs shown on the plans are there only for the rubber band hooks. The hooks are made from paper clip wire.

The Fuselage: The three-view shows two versions of the fuselage. They are identical except for the fin location. For this article, I have designated the original sub fin design as Fuselage I. Fuselage II is the rear fin ver-sion. The place to begin with either fuse-lage is to cut the top, bottom, and diagonal strips. Use medium weight A grain 1/16-inch balsa sheet-cut them exactly 9/32-inch wide. Three strips 36 inches long will do the trick for either fuselage. Next, cut out the pylon and fin from 3/32-inch sheet-medium weight C grain preferred. Cut out two identical fuselage sides-the rear fin model has a 2-inch longer fuselage behind the stab. Pin one side to the plan (and build-ing board), and glue a strip of 3/32 by 3/8-inch balsa that runs from the firewall location to 1 inch behind the pylon at the top of the fuselage beneath where the pylon will go.

Once the 3/32-inch sheet or strip has dried, you can glue in the pylon and fin. Line up the pylon directly over the 3/32-inch strip. Once the pylon and fin glue has dried, glue another strip over the top of the fin and pylon just as you did underneath them. Now you can add the top and bottom 1/16 by 9/32-inch longerons, the uprights and diagonals as indicated in the three-views. Once these parts are dry, a light sanding will level off the high spots, and the top fuselage sheet can be glued into place.

Fuselage II: The rear fin version is very similar to the subfin version, except the 3/32-inch strip can be omitted over and un-der the fin, Simply run the full depth longe-ron to end at the stab trailing edge location. Insert the fin, lining it up straight ahead, and after the glue has dried, clamp the two sides to the fin. Hot Stuff the works in place. Fill the little space between the fin and fuselage sides with scrap balsa.

Completing the Fuselages: Use blind nuts on the 1/8-inch plywood firewall. Bend the landing gear from .040 music wire-each leg is approximately 3 inches long, and the tread between the wheels should be about 2.5 inches. Groove the plywood so that the landing gear wire fits flush with the front of the firewall. Cut another piece of plywood to fit the front of the firewall. Use 1/16-inch plywood for this piece. Epoxy the plywood firewall and landing gear sandwich together. Epoxy the firewall in place on the front of the fuselage with no thrust offset. Cut 1/4-inch balsa cheeks to shape and epoxy into place - be careful not to get epoxy in the blind nuts. Sand a groove in the left cheek to accept the eyedropper tank (see pictures in this column). Give the entire model two coats of clear dope, and cover everything with tissue. Use nitrate dope-five coats plus a coat or two of fuel-proofer. Install the DT snuffer and necessary wire hooks (see accompanying pic-tures for details).

What I found is that the standard eyedrop-per tank holds just 2cc of fuel. I cut mine down to 1-1/2-inch long by nicking it with the Dremel cutting disk (use an eyemask). This allows about 1.5 cc of fuel, which seems to be plenty to get the engine tuned before the launch.

My models came out too light, so you need not be overly concerned with the weight of the materials. Try to keep under 95 grams-use the weight box to add lead after the model is finished. You can also use weight to add to the nose or tail to balance the model.

A couple of notes: The Pee Wee doesn't use much fuel. A full 1.5cc tank will run my engine for about 75 seconds. Since the target is a 15-second engine run, I have found that just about 1/8 inch before the fuel reaches the tapered part of the eyedropper will give me between 13 and 16 seconds. Don't be too surprised with the lack of precision with the engine runs. Few others will do better.

Another point about this design. The wash-in is intended if you plan to fly right/right. If you intend to fly right/left like the original Spacer was trimmed to fly, DO NOT wash-in the right wing panel - build it flat on the board. You will need to begin trimming the model for right/left flight by bending the fin trim tab slightly to the left (1/16-inch is a starting spot). I suggest that the rear fin version be flown right/right with wash-in built into the wing. It may be necessary to add a very slight amount of right tab to the fin. The required two-wheel landing gear uses 1-inch diameter Williams Brothers scale wheels. On my bottom fin Spacer, I had to use 1.5-inch diameter wheels in or-der to get the nose up for the ROG requirement.

Flying the Pee Wee Spacer: I was able to complete this model in time to take it to the Annual Misery Meet at Harts Lake Prairie near Tacoma, Washington. The sponsors of the meet, the Strat-O-Bats, included Pee Wee 30 in their meet schedule. Six other fellows entered the event—some pictures of them appear with the column. One fellow flew a Mini-Rod, the featured plan in the December, 1986, issue of Mode/ Builder. After some test flights, where the only ad-justment needed was the addition of a 1/32-inch shim under the trailing edge of the stab, I put in three official flights. One max and two near maxes were the result, even though I never got the engine run past 13 seconds. The result was that I placed first in the event. The model flew very well and seems to be free of vices. And for the skeptical, the little MO engine pulls the ship into the sky quite briskly.

I like this little model - mainly because I am still partial to its larger brothers - I've built a bunch of them, but I've never built one that went together this quickly and cheaply. I would strongly urge you to try this event - the ships are fun to build and fly, even if the engines are a bit cantankerous. And do use a fuse; they can fly away." 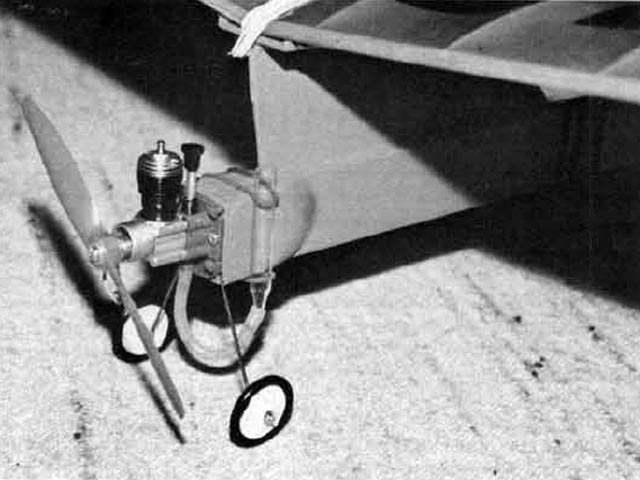