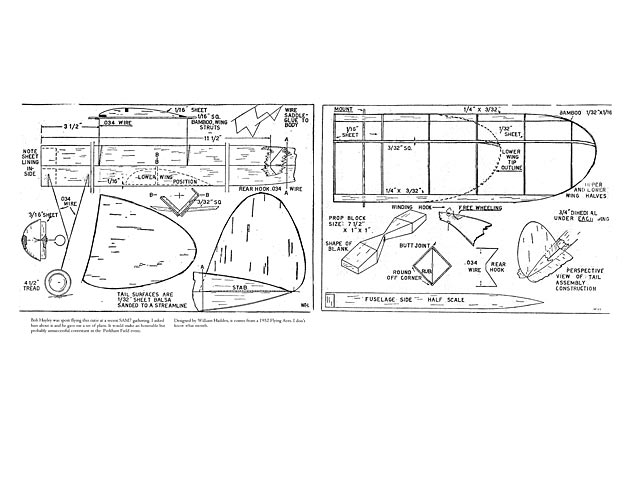 First published in July 1940 Flying Aces, this here is a later reprint in Airflow newsletter.

Quote: "Vertical velocity - that's what this job boasts! And once she's released, the 'Bambino' keeps clawing toward the planets until her power's gone. But when the rubber is wound down there's always plenty of space under the ship to assure long, flat flights - for she comes down just as slow as she goes up fast! Don't miss making her! Bambino Bipe, by William Hadden.

WHICH is better - a long, gradual climb with a slow turning propeller or a rocketing climb obtained by a fast turning prop backed by plenty of power? This question is often argued - but in contests the net results are generally the same. No one can deny, though, that peppy climbs are more thrilling to watch. And they result in more 'soul-satisfying' flights.

The biplane model that this article deals with is of the latter type. The relatively short wing span, due to the area being spread up and down instead of out as in a monoplane, gives less resistance and greater maneuverability, all of which helps that all-important climb.

The complete craft weighs 1-1/2 oz and the power is eight strands of 1/2 in flat rubber. The prop diameter is small, being about the same as on a monoplane of equal span, but the pitch is higher as the blank is square at the ends.

Viewing the model's climb and glide should convince one that the above setup is a good one. And you balsa-butchers who are interested in this little ship will discover that it takes but a scant few hours to make the Bambino.

BODY CONSTRUCTION: Cut out a side from 1/16 soft sheet balsa to the shape shown on the plans. Using this as a template, make three more sides exactly the same size.

Next, glue together the edges of two sides to form an 'L' beam. The resulting butt joint will be simple and strong. While this is drying, a third side is glued to the edge of the lower piece thus forming a 'U' beam. The fourth side cannot be glued on, however, until the rear hook of .034 piano wire is built in. The plans show in detail this phase of construction. Glue the tapering rear together when the top has dried, using a few pins if you discover that you haven't enough fingers handy.

For extra nose strength, cement four pieces of a 1/16 sheet inside the front. Glue the pieces in so that the grain is at right angles to the body grain. To finish the body, glue two pieces of 3/32 sq by 1 in into slits running crosswise in the two lower sides where the bottom wing rests. The cross pieces should be flush with the surface.

WINGS AND TAIL: Cut one set of ribs, spars, etc., for both wings. Sizes of the parts are shown on the plans. The bottom wing is made in two halves and is glued to the body when covered. The wire mount for the upper wing is of the saddle type and is glued on at the indicated position. Two rubber bands hold the top wing in position. The stronger ribs at this..."

Update 30/12/2018: Added article (and also confirmed the date), thanks to JeffMac. Article includes drawings as published in the original magazine pages in 1940. 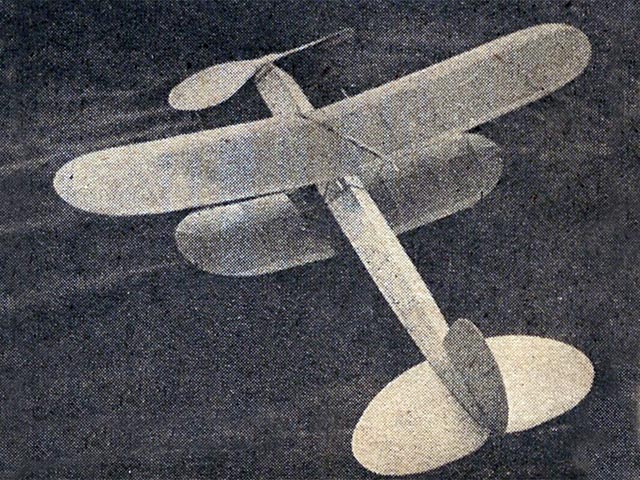