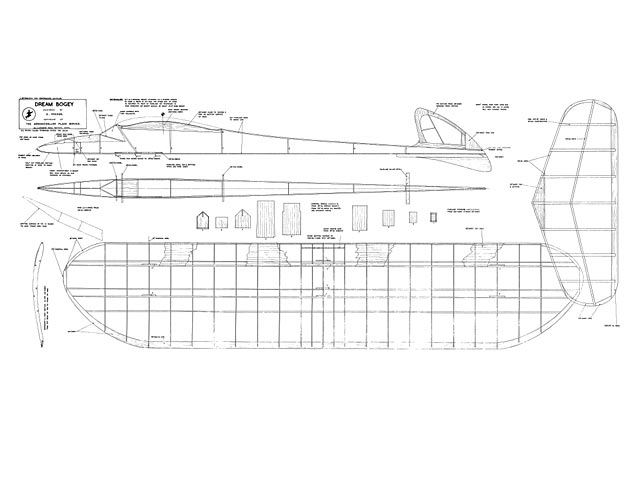 Quote: "I decided at about Christmas 1947, that I had had I enough of lightweights with 3-1/4 sq ft and a 1-1/4 oz loading. I wanted a consistent model well capable of turning in regular flights of 5 mins. The model would also have to be strong enough to last at least more than one competition. Dream-bogey was thus designed as the paradox of a heavily built lightweight, with enough area to catch the necessary risers but not necessitating having the wing in two halves.

Dreambogey I was designed in February 1948. Mark II was placed 8th in the Surbiton Glider Gala with flights of 36 sec, 90 sec, and over 5 min OOS for good.

The next Dreambogey to be built, Mark VI, made a flight of 6-1/2 DTd min and then after being damaged made two other flights of 2 min each in the KMAA cup. Mark VI was also placed 8th in the NH gala where its first flight of 6 min placed it in the final round.

Mark VIII was built for the St Albans Gala where although it was lighter than its preceding Marks, it only turned in flights of 11 and 21 mins. At the W London Gala the trouble was discovered just a little too much turn. Flights of 8 mins, 41 sec DTd and 13 mins, 43 sec OOS proved that the correct trim had been achieved.

A week later after its week in the wind and rain a very warped Dreambogey entered the Croydon Gala 3:1, 1:31 and 5 mins OOS gained fourth prize. With the model in a still worse condition the SMAE cup was entered and Dreambogey timed in flights of 4:57 DTd, 1:30 and 1:27, which were enough to place Dreambogey twelfth on the results list but also, alas, on the scrap-heap!

Construction is simple and fully explained on the plan. Flying procedure is as follows: Place weight in the weight-box until the model balances near the second bottom spar. With this weight my Dreambogey weighed 12-1/2 oz. Hand launch until a flat glide in about 50 yd diameter circles is obtained. Tow the model up and trim for a floating glide. Check that you obtain this same glide on a longer line. Dreambogey will tow up straight in any weather and can be relied on not to fold up in a gale.

The DT is of the swinging weight type. The DT should consist of between 1/2 and 1/3 of the nose weight. The correct amount is best found by trial and error this being achieved by towing up with the DT out. Set the fuse for 5 min in a competition and use a DT every time as thermals can even be caught in rain."

Update 03/03/2015: Replaced with with a clearer plan (patterned background removed) thanks to goldfinger. 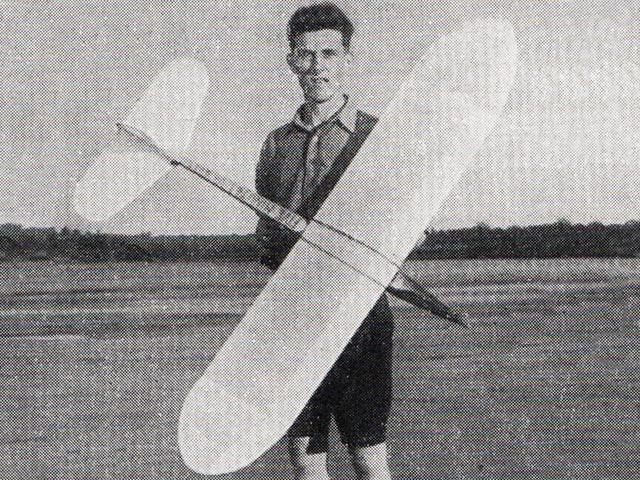