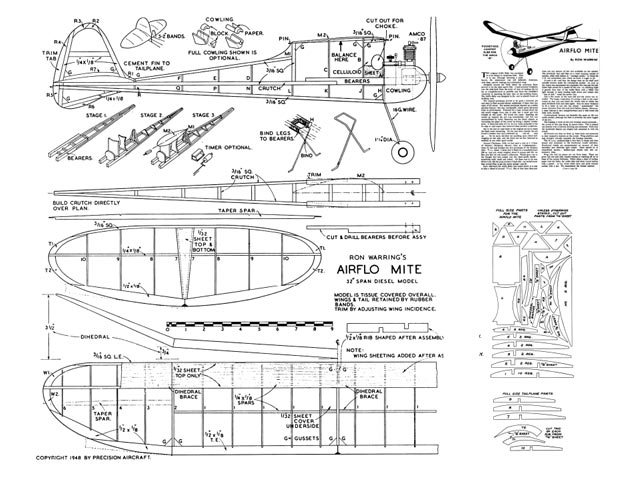 THE original Airflo Baby was produced as a kit design on American lines. That is to say' although featuring a cabin layout, the appearance was still definitely American, with deep, narrow fuselage and polyhedral wing.

Designed around the Mills diesel the prototype Baby proved to be the ideal sports flier. Constructional simplicity was the aim, both from the point of view of making the kit list as straightforward as possible and from the modeller's viewpoint in requiring the least time on the building hoard. The Airflo Baby was designed to fly -not to absorb hours of building time.

The original prototype proved to be quite a duration job and used to float around almost indefinitely if there were any signs of lift about. The second prototype showed up a rather peculiar feature - but one, incidentally, which never detracted from its performance. Trimmed for a near vertical climb the tail would waggle from side to side, but it never got into trouble on this score. We found two cures. Speeding the model up stopped the tail wag immediately, and this was accomplished by either flattening out the climb slightly or increasing the speed of the motor by fitting a slightly smaller prop. A three inch strip of 1/2 x 1/8 in balsa cemented to the fin edge at right angles also removed these peculiar symptoms.

But in the end we went back to the original set-up to make the flight more interesting. On the very neat attempt the job found a modest riser and continued up, and up, and up. So we never did find out anything more about tail wagging on this ship, and the third one we flew behaved as sedately as any other good model.

Around Christmas 1946, we had paid a visit to J Colyer of Majesco Miniature Motors - then at Littlehampton - when he had just finished the first prototype of the Majesco Mite .75 cc diesel. Colyer had it fitted in a straightforward 200 sq inch job which weighed about 8 ounces and this we flew and flew all one winter's afternoon. Which gave rise to the thought that here indeed was the ideal sports model - something really small and robust. All there was to do was fill the tank, flip the prop (at least Colyer did - we needed more than several flips to get the motor going) and fly.

Soon afterward the Airflo Baby was scaled down to a size to take a diesel of around .75 cc. But at that time there just were not any motors of this size available on the market..."

Quote: "Hi Steve, Here's a design from Model Aviation 1948 magazine, Ron Warring's 32in span Airflo Mite for Amco 0.87cc engine. Again these are direct magazine scans, the plan was reproduced at 1/3 F/S with F/S parts. Am sure if there is any interest someone will do the jiggery- pokery to produce a F/S plan! I have an un-started Cambrian (John Venti) kit from 1990's of its bigger brother, the 44in Airflo Baby. Would assume the kit is long since out of production. My rendition of the Mite [see more pics] has a slightly modified nose to accommodate a KP electric motor. Has flown but not yet fully trimmed out."

I recently had an interesting email exchange with Michael Jones, who's looking for information about, or scans of, the British aeromodelling magazine, 'Model Aviation'. According to Michael, "Ron Moulton had one of his designs published in it, so it must have been quite a respectable publication. The magazine seems to have been started just after the War in 1946, and the latest plan date is 1950 - so it was up and running for about 4 or 5 years. Publishers were Ian Allan Ltd, who also published the Model Aviation Planbook. Aeromodeller price at the time was 1/3, so magazine price would have been about the same. One control line plan was priced at 4/-. Magazine content was various - free flight, control line, jetex, rubber power, glider - but no radio control. Some of the plans are tracings or copies of US designs - Luscombe Silvaire, Cumulus, Hotshot. Some of the older modellers may have copies. If so, it would be nice to have some details." If anyone out there knows more, or has scans of any issues we could add to RCLibrary, please email me.
Mary - 18/06/2018
Add a comment