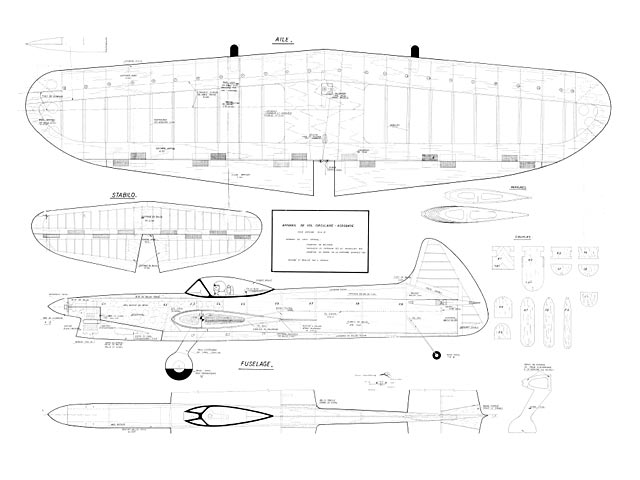 Quote: "We have to journey across the big pond and back to Europe to feature this classic Stunt model, designed by Louis Grondal. It was entitled originally, as the AM. Special but is more affectionately known at the Grondal Nobler. Much of this documentation has been supplied by Henk de Jong, Christoph Holtermann, Paul Citrin, and Claus Maikis, all eminent European C/L modelers. LeRoy Black Jr of Buckeye, Arizona, requested and completed the construction of the model featured in this article.

The search for classic Stunt models, which have not had a 'full-blown' article, west of the Atlantic Ocean, is for naught without the help of so many of my European friends. To everyone who helped, I extend my gratitude. A good deal of information was gleaned by a search of Google.com or ask.com using Louis Grondal as the focus of the hunt. You could easily do the same and obtain equal results and information as I have done.

According to Henk de Jong, Louis wanted a model with more corner than the one he was currently competing with in the late '50s. Louis took a hard look at George Aldrich's Nobler (oz6212), and decided that if he were to compete on a more equal footing, he wanted a more American-styled Stunter. Although the Nobler held a resemblance to the French Caudron racing plane, Louis chose a softer, more curvaceous school of thought in the final prod-uct of the AMA Special. A commentary by Tubby Day of the 1963 Criterium of Aces event noted that: Louis Grondal was flying the O/D model (with wing-mounted bellcrank and leadouts) which has since become known as the Grondal Nobler, although there is virtually no resemblance to a Nobler at all.

Information gleaned from the December 1961 Aeromodeller edition, listed as Volume XXVI, Number 311, showed that the 1961 XI Criterium of Aces was flown in Genk, Belgium. It was noted that the flyers had to fly both an FAI and an AMA type pattern. This bolsters the thought process that Louis was using two separate models to fly the two different patterns to produce his first World Championship. The same source of informa-tion stated that Louis Grondal was always the "quiet and unassuming" modeler, and ca-pable of sneaking in some very nice flights. Some sideline observers thought that Jun Sirotkin might have been the man of the hour, but Louis was the one on the podium at the end of the competition.

Page 24 of the May, 1963 issue of Model Airplane News captioned a shot of Louis' model as: Grondal's 1961 Criterium Stunt winner, one of his models used to win the 1962 FAI World Championship, Fox 35 powered with Top Flite's prop. Lou's planes have won many, many times.

Thus began a series of three World wins at the 1960 FAI World Champs, the 1961 Criterium of Aces, and the repeat 1962 FAI win in Kiev, USSR. It was further commented that everyone that viewed Louis Grondal's excellent flying during the 1962 FAI World Champs held in Kiev, was sure that he won handily. There seemed to be no controversy that year in Russia.

An ask.com search revealed an article from the XI Criterium of Aces in Genk, September 15/17 1961, as reproduced from Aeromodeller in December, 1961. It came from Volume XXVI, Number 3111 which stated that Juri Sirotkin lost a lot of points during his 1962 AMA portion of the contest, by performing maneuvers out of sequence. This assured Grondal's win. It was printed: Grondal flew his Criterium d'Europe winner for the FAI pattern, but a different model for the AMA Schedule. Information shows that the Criterium was flown in the years in which the FAI World Championships was not scheduled.

Louis walked away from control line Stunt, but became an excellent R/C pilot and learned to fly model and full scale sailplanes. Another Internet search on his name revealed Louis was formally recognized in title format as holding the Silver and Diamond Badges in FAI Full Scale Soaring..."

Quote: "Here's another one for the site!" 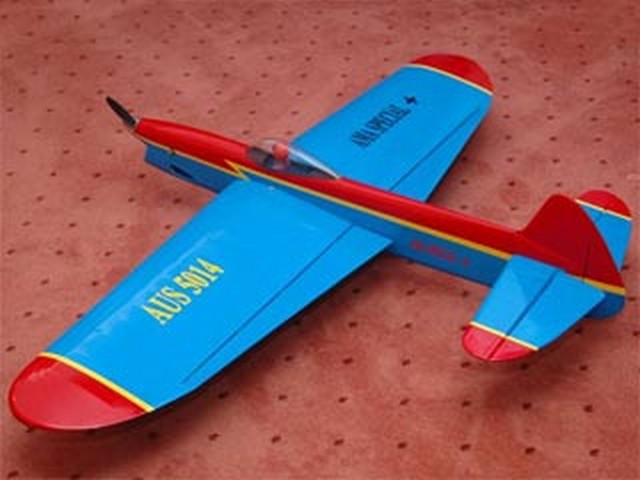 Hi Steve, Louis Grondal was a Nobler flyer at the first World Champs as well as at the Criterium of Aces European Champs. In those days, the FAI pattern was much different to what we fly today. At the first (and maybe the second??) World Champs, the flyers flew two of the "simpler" FAI patterns and then the third round was flown to the AMA pattern with the squares and hourglass in it. Louis modified the Nobler from the "Green Box" to have the bubble canopy etc to create "The AMA Pattern Special". However, in years after that the AMA Special became known to us as "The Grondal Nobler". Moments and wing section is all classic Nobler size but with rounded tips and 52" span. I guess you just have to decide on which version of the Nobler it is near to but I think we find it to be nearer to the Green Box one. Here is a nice picture of one built by Dallas Hanna, one of our Australian Flyers http://www.clstunt.com/htdocs/dc/user_files/35529.jpg And here is one with Louis Grondale himself http://farm6.staticflickr.com/5053/5417668717_980b350fca.jpg
MikeNelson - 29/04/2013
The blue model is an enlarged version at 118% for anything from a .46 to a .60 for power. This one is powered by an MVVS 51 RI/RE engine.
DHanna - 02/05/2013
Add a comment