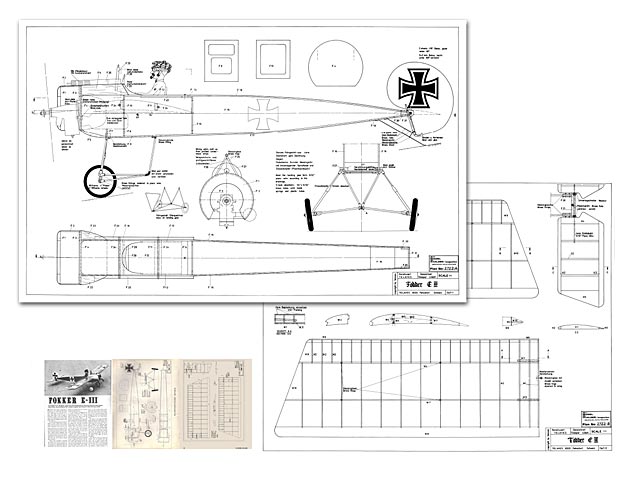 Quote: "This Fokker E-III Eindecker comes from the drawing board of well known German model designer Berni Huber. Just the thing for VVW I contests or general sport flying for those who enjoy realism.

Antiques have always fascinated us, therefore, its no wonder that the Fokker E-III caught our eyes. This ship had a clean and simple construction for its time, which makes it easy to model. A monoplane further, as the name implies (ein, or one decker) has only one wing, which keeps the building expense down to the minimum.

From the somewhat primitive Fokker Spider of 1910, a whole series of monoplanes followed, which all had basically similar construction characteristics. Later planes (1912-13) were marked with M1 and M2 (the M stands for military): these were followed by the M3, M3A and M4. These models proved unpopular with their pilots. By the end of 1913, the M4 was declared a failure, whereupon Fokker abandoned the construction of this aircraft and took on his former assistant Martin Kreutzer.

Fokker had to produce a successful new design if his firm was to survive. In 1913 he had seen a Morane-Saulnier type H monoplane at Johnnisthal, which impressed him. This plane had achieved a number of successes that year so Fokker was determined to copy it.

For this purpose, a damaged type H was rebuilt at Schwerin. However, the Fokker-monoplane was not a minute copy of the French types, as only the principal shapes were copied - the structure was completely new and considerably stronger than the Morane-Saulnier. This new Fokker monoplane was given the number M5, and after the 80 HP Gnome engine was available, it was successfully flown. Two variations, one with a shorter and one with a longer wing span were tested, whereby the type M.51 (longer) proved somewhat slower, but in return was better handling.

Mounted with a LMG 08 (light machine-gun), these planes were given the military marking E-I. Later the E-II was built, whereby the wing area was reduced, to give a hoped for increase in the aircraft's speed. Unfortunately however the E-II proved more difficult to fly. The wing area was enlarged again and received the name Fokker E-III, (type number Fokker M.14), which proved very successful. A total of 600 Fokker monoplanes were built and were used successfully on all fronts. There were considerable variations regarding equipment and painting. For details, see reference Profile Publication No.38 'Fokker Monoplanes'.

The model is a free supported middle design, whereby the cabling has a more decorative character. The fuselage has a simple solid box construction. The en-gine is bolted to an aluminum plate hanging on the first fuselage former. The top part of the revolving (scale) motor is covered with balsa. The wheels and related parts have been directly copied and are equipped with guide rods and telescopic legs. The all flying stabilizer and rudder are true to the original.

The wings are laid out in two parts whereby they are fastened with two music wires in typical soaring glider fashion. This method is relatively simple and clean, but has the disadvantage that it cannot stand unscale maneuvering. Without a doubt, however, it is stromng enough for stunt flying when flown 'softly'. The cabling is only symbolic and made of rubber band. Those wishing to go all out should use stranded wire rigging..." 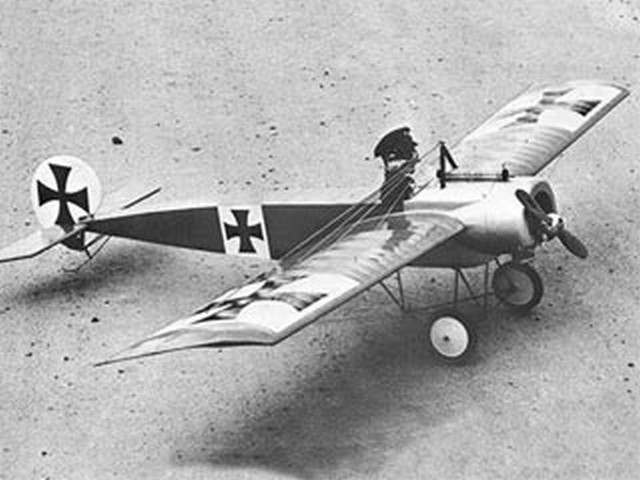