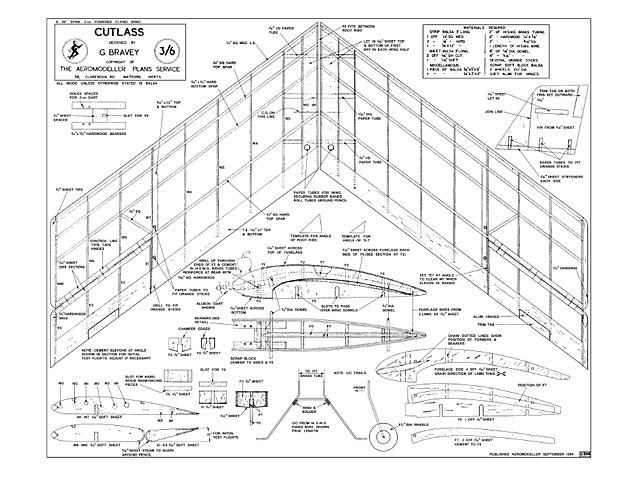 Quote: "Tired of the conventional? Get out of the rut with this unique flying-wing for the smaller capacity diesel. Easy to build and fly, it has a high performance and is virtually crashproof!

WE WERE first attracted to George Bravey's swept flying wing at the 1953 Yorkshire Evening News Rally where it made many consistent flights to the delight of a group of admirers. Then again, at the '53 All Britain Rally, Mr Bravey made further impressive demonstrations with this 'suitcase size' design, which we thoroughly recommend to all sport flyers.

When we say 'suitcase' this is no exaggeration for the largest portion of the dismantled Cutlass is no bigger than 15 x 6 in - surely no problem for transportation! Breakdown into small parts for easier carriage also adds to the crashproof qualities of this design, for any hard knock taken on the wingtips is easily shockproofed by the split wing fixing at the centre section and elastic band assembly.

Wings: Cut out the ribs using a template on sandwich method. When cutting the spar slots remember to cut at an angle. Construction is normal and to ensure accuracy with the elevons build these in with the wings but remember to set the end ribs of the elevons at an angle while building.

Wing end ribs should be left off until the rest of the wing has been finished. Then cement in and while drying prop one wing tip up 1i in. and then set the angle on the ribs. This ensures accuracy. When set, mark paper tube position and bore holes through the ribs which accommodate the tubes.

The 1/16 sheet at the wing root is let in between the ribs. Bore the hole for the rubber bands and set in paper tube.

Tubes for the fin mounting can be made around a bicycle spoke, holes bored, and the tubes simply smeared with cement and pushed in. Fuselage: Cut out the fuselage sides following the grain as per plan. Cement the respective sides together setting in a slight curve which makes for easier building later.

Cutlass is the name of a full-size American Navy fighter with similar sweepback and twin fin arrangement as George Bravey's model. This model Cutlass also has an interceptor-like performance and zips off the ground after a long take-off run to build up speed. Assembly of the components is simple, as seen in the photo at right..."

Update 04/07/2016: Replaced this plan with a clearer copy (patterned background removed) thanks to TonyP. 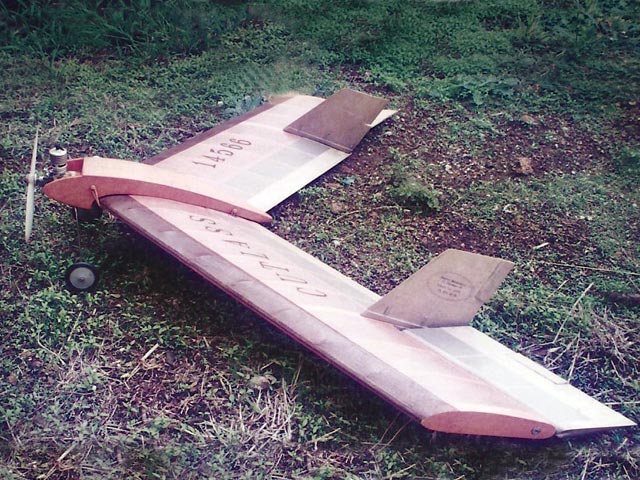