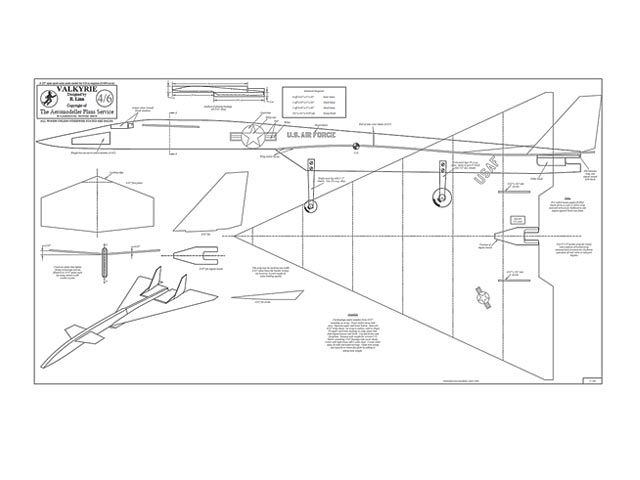 B-70 Valkyrie. All-sheet profile semi-scale model. The Valkyrie as published in the Aeromodeller of April 1961. This is a modern CAD redrawn plan.

THE MOST EXPENSIVE aircraft ever to be constructed, costing far more than its weight in gold, the North American B-70 Valkyrie is intended to travel at speeds in the order of Mach 3 at altitudes of 70,000 ft and it has been proposed to use a machine of this type as a launching platform for DynaSoar, Samos, Midas and Discoverer space vehicles. (There's scope for experiment by intending builders of this model!)

In complete contrast, the all sheet semi-scale model offered by Bob Linn will burden not even the tightest budget. The little craft has been specially designed to give hours of fun for a very small initial outlay both in money and time. To those for whom the most important requirement is a model that will take a great deal of punishment and still retain its good flying characteristics, Valkyrie fills the bill. This is one of a series of Bob's B-70's. At the moment he is working on a multi-channel R/C variant having had so much success with his first rudder-only, Veco 19 version.

First step is to glue the fuselage centre member pieces in the rough shape shown on the drawings. It is a good idea to pre-glue all edges before making the butt joints. While this is drying, the wing pieces may be cut out; try to select wood of similar grain and bend character-istics, checking each offcut end to see if it will make one of the other pieces. After all the wing pieces have been cut, assemble them on a large, flat surface and butt join edges with PVA glue. Be certain the edges blend smoothly before starting gluing operations. If possible leave the wing to dry overnight.

When the fuselage pieces have set, the fuselage profile may be traced with carbon paper but be specially careful to lay out the airfoil curve as shown on the drawings as this is very important. Cut out the fuselage including the foreplane slot and the cut that separates the lower fuselage with the airfoil curve. Check to be sure that this cut is not bevelled so the pieces will sit on the wing at 90 degrees angle.

When the wing is dry, sand it on both sides to smooth the joints between sheets, radius the edges and mark a centre line down both faces and cut the slots for the fins. Cement the upper fuselage to the wing surfaces, over the centre line using plenty of pins to keep the wing tight to the fuselage to form the airfoil. After this has dried, add the lower fuselage.

Regardless of engine used, weight must be added to the nose to bring the centre of gravity to the desired position. The best way is to insert the weight in the centre shell before finally cementing the side halves; however, if the builder wishes, he may add it afterwards externally through a hole in the top. Glue the foreplane in place; add the fuselage side pieces, then carve and sand the fuselage to shape with squarish edges.

After the wing-fuselage joint is dry the final work on the wing can be completed. Add the fins, making sure they are parallel to the fuselage centre line. Fit engine mount and block bracing.

Covering with lightweight tissue is a good idea as not only does it make the wing easier to paint but it helps to keep the airfoil in shape, strengthens the surface, and prevents fuel soakage. Install the engine using either beam or radial method depending on what ever power plant is selected.

Engines recommended are those that will run backwards, as pusher props are sometimes hard to come by, those with reed valves (Cox, Cobra etc) or side port (Mills .75) will run in either direction and will take a normal prop fitted front first and run in a clockwise direction. If a separate commercial tank is used the outlet in some cases must be changed to allow the engine to feed fuel in a climbing attitude, a control line tank, slotted through the wing was fine on the prototypes.

After completion and weight has been added to nose to bring the CG to point marked on drawings, you are now ready to begin flight tests. Make a number of glides from overhead hand launch. This model must be heaved quite hard to give it flying speed. Don't be afraid to throw it, as good forward speed is very essential. Correct the nose up or down glide by adding or subtracting weight from the nose.

After glide tests are satisfactory, prepare for power flights. For the first flight use zero thrust adjustments. If you are using a really hot engine, try about 3/4 power for the first flight. The B-70 can be made to turn either direction by a very small movement of the edge of both rudders or movement of the engine. A few words of warning, remember this is a pusher installation; be sure the air from the prop is blowing the right way before launching!

Landing gear is purely optional for those who want to see an inspiring fast climb after speedy ground-run, and if anyone tries to tell you that all-balsa-sheet models have inferior performance, just make sure he is around when your B-70 is Mach-busting the air at the club ground." 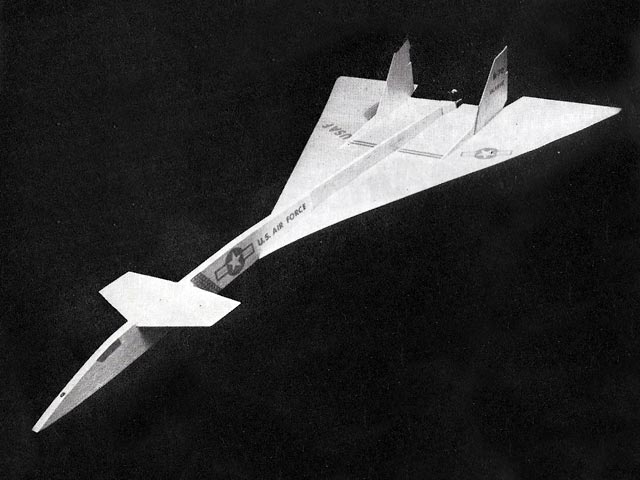 I was an inexperienced free flight model flyer when I built this plane. I did a super job of building it, testing the engine and getting the glide just right. Filled up the engine, fired it up and let it go on top of one of the highest hills in Cincinnati. It flew right out of my hand straight as a arrow and continued on that path until it was out of sight! Hard way to learn that you need to trim free flight models to fly in circles and only put a tiny bit of fuel in them! If you run across this great model let me know. It could be on the moon as far as I know. Best Regards,
ChuckLohre - 28/07/2014
My B-70 from 1963 [model pic]
David Wright - 10/02/2020
Add a comment