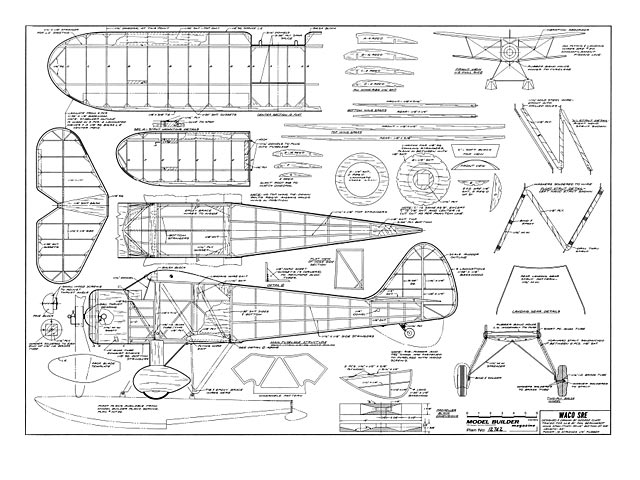 Quote: "A classic cabin biplane scaled for free flight rubber or gas - also qualifies for Jumbo Scale - and it wouldn't be too difficult to convert for light-weight R/C. Correct size for Cover's Edo floats. Waco SRE, by George Clapp.

Having four grandsons living on Oneida Lake just north of Syracuse NY, gave me a good excuse to build Chet Lanzo's Puss Moth (January '72 MB) on Hal Cover's Edo floats (October '73 MB). After seeing Walt Mooney's Peanut Waco SRE (oz1472) however, and being a Waco nut, I decided to draw it up (using Walt's outline times 3) and put it on floats. As work progressed, I sometimes wondered why I didn't stick with the Puss Moth, but having scratch-built most of my life, I guess it was natural.

The size of the Waco was dictated by the size of Cover's floats, as I didn't want to do them over. The prototype shown here was also built to be flown R/C with rudder and throttle control. This is not shown on the plans, but easily done.

FUSELAGE: The fuselage is of pretty normal con-struction, but built in 3 sections; (1) beneath the windshield, (2) cabin section, and (3) aft of the calbin. (No bent longerons). Then all 3 are glued together.

It should be noted here that 20 lb monofilament fish leader flying and land-ing wires bear some loads, and therefore the fuselage cabin section at the top should be especially well built. These flying and landing wires not only add to the looks but also hold the whole wing assembly in place, and allow little damage in a crash, as everything simply comes apart.

The monofilament runs from the cabin to wing hooks and then back to the cabin, to make double flying and flying wires. Heat-shrink after fastening (with epoxy) at the cabin. Wires are then stretchable enough to disassemble plane.

The aluminum tubes (4) that the wheel and float landing gears plug into are epoxied in place. The rubber band that holds the landing gear together is only on the front tubes as noted. The rear float struts are held up and braced with monofilament line.

The cowling on my ship was built up and mounted on a face plate that I made for my electric drill, then turned.

The windshield is made as follows: Iron satin-aluminum Monokote to a piece of medium weight bond paper. Using windshield pattern, cut openings and outline to shape with model knife (Uber, of course!). Fasten .007 clear acetate to back side with double-stick tape.

Side windows are made in the same manner.

WINGS AND TAIL GROUP: The top wing is built in one piece, with two dowel plugs that go into block at top of fuselage. It is important that front plywood splice extends out to second rib from root because of cut out at front of wing. The tips are built up of four 1/32 by 1/8 inch laminations of balsa. Being my first attempt at laminations, these proved unsatisfactory..." 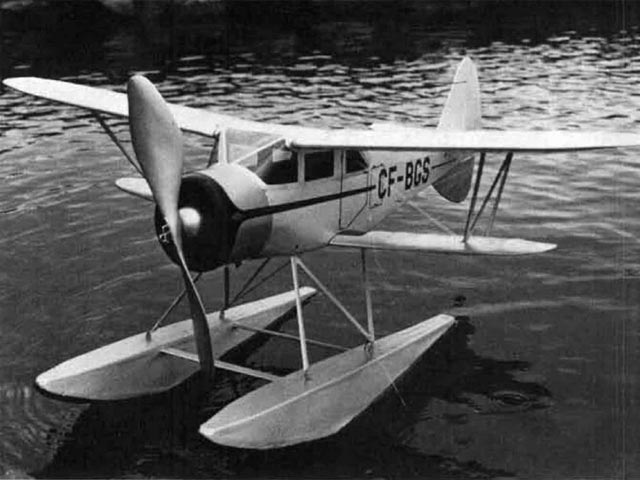