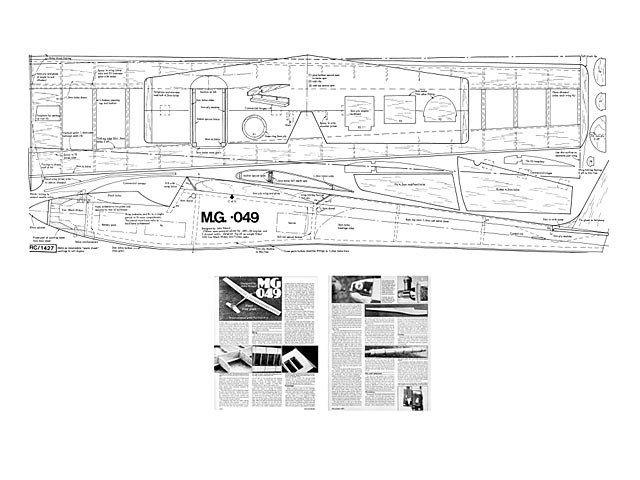 Quote: "I WAS ONE of the people who got their hands on the Kyosho Sportavia when it was at the Aeromodeller offices for testing. The way the Cox Black Widow is able to pull a two channel model of nearly two metres span into a respectable climb never failed to amaze me. It also set me thinking that this is the kind of model I need for some nice, relaxed, Sunday afternoon flying. It will slope soar if I feel like it and operate out of a small field if I cannot be bothered to drive very far.

After thumbing through some magazines on full size gliders. I had a firm idea in my mind of what sort of model would resemble a typical sailplane. For some reason or other I do not like the look of low wing glider designs although it is the practice for most full size motor gliders. A high wing design was therefore adopted for looks and stability.

The preliminary outline sketches began to look very attractive. I talked them over with the editor who gave me the benefit of his experience with similar models and then the ideas joined the 101 other projects I have not got round to doing.

A telephone call from the editor asking after progress and whether it could be ready for this issue lifted the project to the top of the pile and me into frantic action. Three weeks later the prototype was ready to fly and I had burned a lot of midnight oil. What emerged is an attractive model which is not difficult to build or fly and is at home on a slope or a flat field.

Wing: The ribs for the straight taper wings are made by the sandwich method. Cut out a root rib and up rib template from thin ply, and sandwich the required number of balsa blanks. Remember the templates are 1.5mm smaller all round than the final section due to the sheeting and capping going on later. Numbering the blanks before making up the block makes assembly easier. I prefer to make two, handed, sets of ribs at the same time. Sanding down the same set of templates twice can result in wings of slightly different section. Using a small saw, cut out the spar knotches and leading edge flat. A small file is a useful tool for getting a good fit.

Using the root and tip rib to mark the tapering depth of the 1.5mm balsa main spar, cut out two spars using a long straight edge. Mark off and cut out the rib knotches and use the template to cut the root rib angle. Glue on the bottom spruce spar only and leave to dry under weights to hold it straight and true..." 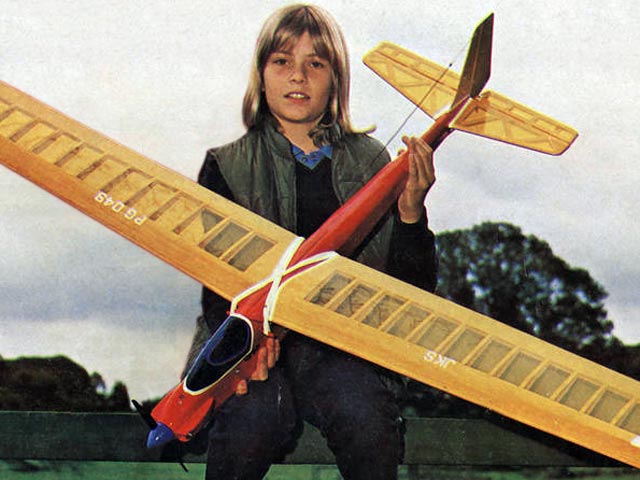 I built MG049. It built well, and the instructions were clear. When I went to balance it, it was decidedly tail heavy with the Cox .049. I went to my machine shop and made an aluminum motor mount for a muffled Enya .09 R/C, with the same bolt pattern as the Cox. Solved the balance problem. Now I have more power, and I can throttle back if I choose. To avoid tail heaviness in your build, I recommend skeletonized tail surfaces, and fenestrations in the aft fuselage. These fenestrations will also allow greater access to the pushrods, if ever needed. Clear Monokote on the wings makes for a wonderful appearance. A section from the upper part of a plastic water bottle was a perfect substitute for a store bought canopy. A micro-size servo does well for the motor control. Minis do for elevator and rudder. If you want a powered floater, this is a good'n.
JohnBuffum - 19/02/2015
Add a comment