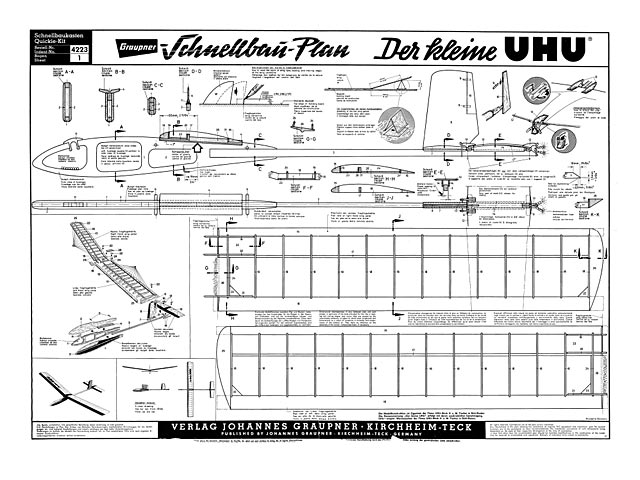 Preface: Der kleine UHU is a beginner's model designed with special consideration for ease of construction and splendid performance. The model meets the contest rules for A/1 class gliders and is equipped with a dethermalizer in cyder to prevent OOS flights. The model is easy to launch with the aid of a towline.

An easy-to-read Quickbuild plan and the photos simplify the build of the model very much. Numb ing of the parts follows the sequential order of the assembly of the model.

In order to cut down the building time the material contained in the kit has been profusely prefabricated and several parts have been made of cementable plastic. Cautiously remove all plastic parts singly from their 'tree', using a sharp knife. A surplus dethermalizer horn (13) has been supplied, which serves as a spare for a damaged one.

Cautiously cut out all die-cut parts from the sheets, using a sharp knife or a razor blade; don't try to press them out. Two surplus ribs (18) are provided on die-cut sheets B/2 which may serve as spares for damaged ribs, if necessary. The fuselage center layer is only partially die-cut and is cut out with a scroll or coping saw. Cut plan in two at center (broken lines) for ease of handling.

Building instructions: Tools: This prefabricated kit makes it possible to build the model with very few tools; this is what you'll need:
1. a scroll or fret saw with blades, a working platform and a clamp, to fasten the latter to the workbench
2. a sharp knife, such as indent No.10, and a. razor blade
3. a sanding block with coarse and fine sandpaper, plus a small round file
4. a couple of spring-type clothespins (indent No. 543)
5. some 40 glass-head modelling pins (indent No. 639)
6. a small brush for glueing, a slightly wider one for doping
7. a straight plank for the wing assembly

After the cement has thoroughly set the two holes for the wing dowels are drilled through part (2) with a round file. Be sure not to enlarge the holes in part (1), which serve as a guide for the file. Sand off surplus wood at the fuselage center layer/tail boom junction, if necessary.

The second fuselage doubler, again with coloured side outside, is now cemented to the center layer. Until dry the parts are pressed together with clamps. File holes for the wing dowels through second doubler (Fig. 2). Finally sand the fuselage thoroughly, as per plan.

The milled wing platform (4) is then cemented to the fuselage in such a manner that the wing sits perpendicular to the fuselage later on. The wing dowels (5) are cemented in their holes and the rear end of the tail boom is cut off obliquely, as per plan..." 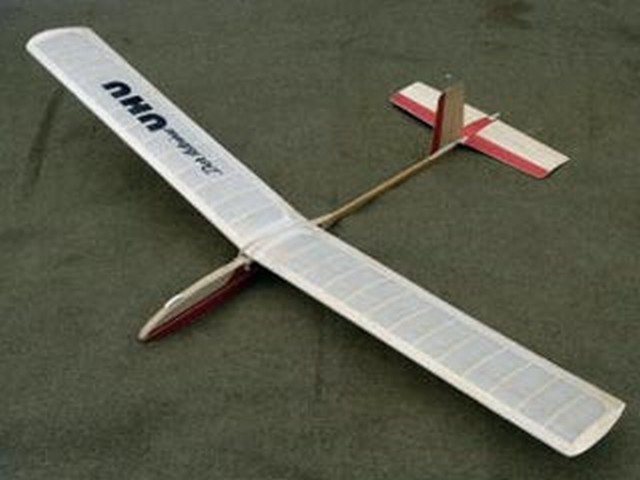 It is a very good glider due to the fact it had a large number of molded plastic parts which made it easy to build. Pity the kit is no longer made. I still have the model today & it flies well [pic 003].
RichardHenderson - 06/10/2015
Very interesting subject the Kleiner Uhu! From the very beginning it was sponsored by UHU-glues from Germany, their name is also the German word for eagle owl, so the Kleiner Uhu was nothing but a small eagle owl ... There was a big nation-wide contest with this small glider organised by UHU and Graupner, and the model was actually redesigned in 1964, 1967, 1976, 1981, 1984, 1999, 2014 and 2016 (!) For more information have a look at www.flugmodellbau-kirch.de
ArminB - 06/01/2017
Richard's Model is a later mark of this model which has gone thru many variations from the 1950-ies onwards. The plan is for the one of the early 1970-ies whilst Richard's model appeared around 1979/80. Thus, the plan is without a prefabricated forward fuselage and can easily be built from balsa and plywood, given some skills with a jig saw. I built it myself as a kid, more than once, and they flew really well.
Peregrine - 21/01/2019
Addition: If I remember correctly, Graupner continued to produce and sell this specific version as "Pilot", just like they continued the 1956 version as "Sonny", which also is on Outerzone.
Peregrine - 21/01/2019
Hello my dear Outerzone friends. I visit your site every day to see what's new, since a few years ago, when I discovered the page, and I feel now, friend of the house.
In the decade of the 70s I built a UHU of Graupner. The 1967 version. I still keep the original box of the kit, the plan and the instructions, all in German. And the model, of course. My model was heavy, but for my expectations at that age (about 15 or 16 years old), it was flying very well with a line of about 25 to 30 meters.
Years later with time and Autocad through, I redrew the plan to keep a copy that could be printed at will. I must have photos on paper or slides of the UHU at that time, if I find them I will send them to you, in case they are of any use.
I will always remember with dearness that Der Kleine UHU. Since then, many other models was built, including a Keil Kraft Lady Bird (I also keep the box, the blueprint and the original instructions) but that's another story.
Steve, Mary. I thank you for the wonderful work you do, it has allowed me to remember old good times, and I think that same thing happens to many of your followers. I am at your service if I can be useful in some way.
I wish you the best from Argentina.
Hugo Hurrell - 24/05/2019
Hi!, Thank you for make this plans available, I really appreciate it. just my 2 cents on this one, the Description, plan and pictures are wrong. The plan is for the Der Kleine UHU 4223, you have published the pic for the 4234, and decription for the 4247. I have the plans for the 4234 and 4247 and Junior 4241 if you want them.
Gonzalo Enrique Jimenez - 02/03/2022
Hi Gonzalo, yes please, that would be great - email us in everything you have, and we'll put each one up here as a separate listing. Many thanks,
SteveWMD - 02/03/2022
Gonzalo, it seems to me the Graupner plan here is ref 4223, the instructions are ref 4223, and the main pic shows model ref 4223. So all is well. The description, plan and main pic are correct. The only thing on this page that's not straightforward is that pic 003 (from Richard) shows a later model variant, with polyhedral wing layout (as previously mentioned by Peregrine in an earlier comment). I think that's fine. Send us in the later plans, when you get a chance.
SteveWMD - 03/05/2022
About this model saga: https://www.flugmodellbau-kirch.de/Der-kleine-UHU.htm
pit - 03/05/2022
Add a comment