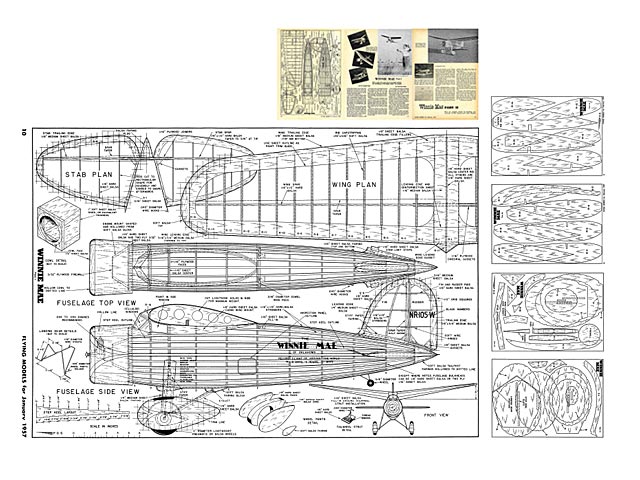 Quote: "The Winnie Mae is one of the more outstanding aircraft that typify the colorful era of the 30's. An era when record after record fell by the wayside as flyers zoomed the world over tb best and beat their competitors.

Wiley Post piloted the Winnie Mae from nation to nation making headlines in newspapers the world over. Most notable of Post's flights was his solo trip around the world. He and the Winnie made it in 7 days, 18 hours and 49-1/2 minutes flying 15,596 miles around the northern air circumference. The flight started on July 15th and ended July 22nd, 1933.

This was the second of Post's globe circling flights in the Winnie Mae. His first was made with Harold Gatty in 1931 when the two of them made their historic circuit in 8 days, 15 hours and 51 minutes and covered a distance of 15,474 miles. Both achievements showed the supremacy of this now historic Lockheed-Vega aircraft.

For many years we thought of doing this aircraft in model form and we were particularly interested in trying 'a free-flight version. We had high hopes since the ship has extremely clean lines and a substantial and generous fuselage - the possibility of trying R/C at later date proved to be a sidelight.

The project proved impressive and we finally succumbed to its lure and built our model; Years of thought resulted in a simple approach which compromised little of the scale detail and made the model a practical reality. Our main concern was to produce a flying scale model and not a powered shelf model.

The ship is large by current standards and we feel that this adds. much to its flying success. Our first attempts at flying this model made us feel that we were standing in the past watching the real thing take wing for its globe-circling flights.

We'd finished adjusting the gliding trim and decided on making the first powered flight. Very little trim was required for the structure balanced out close to flying trim. In itself, this is surprising for a scale model.

The engine, an .049, was started and richened out to reduce power. We'd decided that a 15-second engine run would be enough for this first hop. A hop that was to be no more than a powered glide. On launching, the ship took a shallow climb skywards proving the clean lines of this scale aircraft.

Later flights, with more power, still saw the model adhering to scale-type flight but, of course, with better performance. To say that we were pleased would be a minor statement. The ship scored on all points.

It's consistent and stable, a trait any model aircraft can flaunt with pride. To top it off, our ship scaled about 16 ounces - one pound! In spite of all this, the glide was reminiscent of the days when lightweight rubber-powered models ruled the scale roost, not gas models.

The large and very thick scale airfoil section adds to, or makes, this performance. It also produces a slow glide and powered flight. Something which we haven't seen since the advent of thin sections. The ship shows little tendency to 'balloon' in gusty air. RiC fans might find this model just what they're seeking.

We didn't try to make the model the simplest thing in the world since we were interested in the scale lines. For this reason the ship takes a little longer to build than most models. We're sure you won't mind if you really enjoy flying scale models and have a keen interest in building. This doesn't mean that the ship incorporates difficult construction, it just means that there is no sacrifice of detail. This first part deals with, the construction of the fuselage. You'll find enough to keep you busy until Part II appears in the next issue of FM.

FUSELAGE: Note that the ship is built on a step-keel. Make this first following the dimensions shown. From this point on, it's simple. All bulkheads are shown full-size on Plates 2a and 2b. Stringers fit into the slots as shown. Make sure that the landing-gear bulkhead includes the landing gear before adding stringers.

The cowl and tail block are made from balsa as noted. Carve and sand these until they conform with the plan.

We suggest that you follow the notations shown on the plan when making the wheel pants and strut fairings. They proved to be very light and sturdy while serving the functional need for streamlining... " 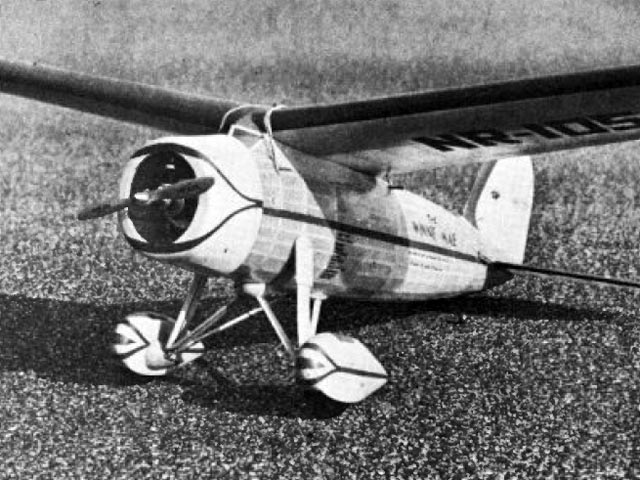