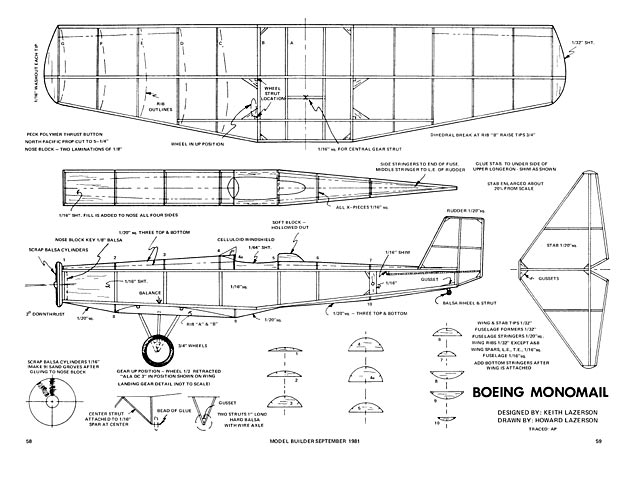 Quote: "From a young man who has already learned the Doc Martin theory that the highest total contest points come from the ability to fly well, we present living proof! Boeing Peanut Monomail, by Keith Lazerson.

The Boeing Monomail appeared in 1930 as a modern, all-metal cargo and mail aircraft known as the Model 200. Later models were designed to carry passengers along with the mail. The 221 carried six passengers, and the final model, 221A, could accommodate eight in the forward fuselage. The plane was a great commercial success.

The Monomail was a very clean design. and despite its size, it achieved a cruise speed of 137 miles per hour with a Pratt & Whitney Hornet engine. The main gear partially retracted into the wing, similar to the DC-3. It had a wingspan of 59 feet and weighed 8,000 pounds, and had a range of 540 miles. The design resembled a pursuit ship more than a commercial carrier.

Construction is straightforward, but attention must be paid to building the aft portion as light as possible to avoid adding excess nose weight. The rudder and stablizer were built with light 1/20 sq strips. The motor mount, as drawn, could be shifted forward one station with a further weight saving if necessary.

The main fuselage frame is built up with 1/16 sq strips and the second half built directly over this after covering with wax paper or plastic film. The fuselage ends are beveled with sandpaper, glued, and 1/16 sq cross pieces top and bottom added, working toward the nose, taking care to keep the frame square. Top and bottom 1/16 sheet is then added to the nose.

The fuselage formers are cut to shape from 1/32 sheet and glued in place. One can eliminate notching and simply glue on the 1/20 sq. stringers, which saves a lot of tedious work. No stringers are added between (8) and (9) until the wing is glued in place.

The nose block is built up with 1/16 or 1/8 sheet. Simulated balsa cylinders are added as drawn. and painted flat black. To facilitate covering, the windscreen and head rest are added last.

The wing is built by pinning down the leading and trailing edges and the tips. The ribs are cut slightly oversize and sanded lightly for a good fit. Note that the four center ribs (B and A) are 1/16; all others plus the wing tips are 1/32. The A ribs are straight since they mate with the fuselage. I prefer to glue the ribs in place and then mark the spar locations with a straight edge. This eliminates wiggly spars; the same method is used for gluing the stringers to the body formers.

Next add the landing gear gussets. When dry, notch the top of the spars and LE and TE, at ribs B-B. Keep the center section pinned to the building board and genty crack the wing at the notches to make a 3/4-inch dihedral at each tip. Now glue in the LE and TE gussets with the wing blocked in place and add a drop of glue to each notch..." 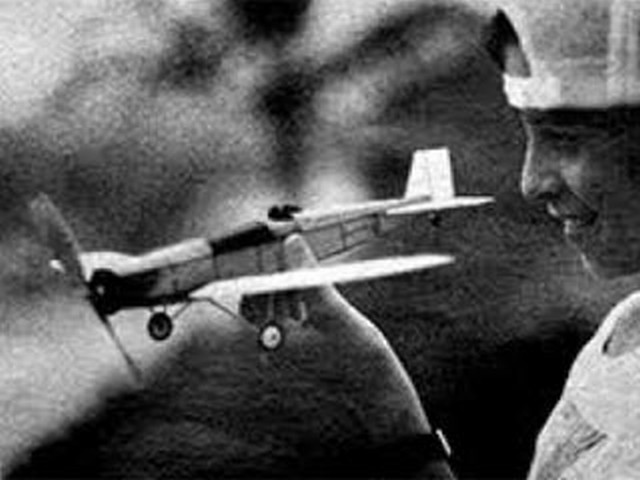