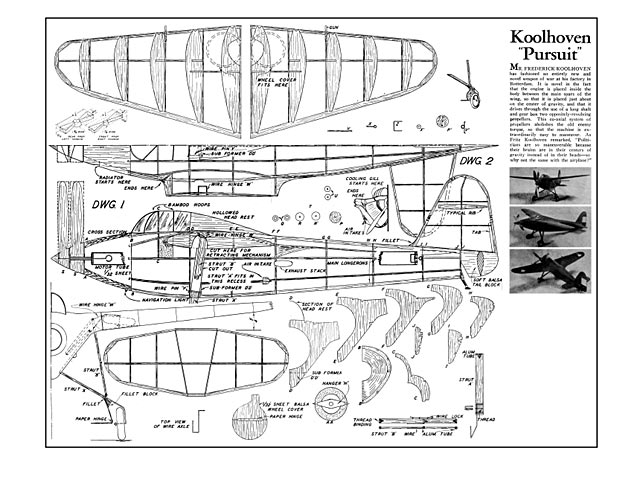 MR FREDERICK KOOLHOVEN has fashioned an entirely new and novel weapon of war at his factory in Rotterdam. It is novel in the fact that the engine is placed inside the body between the main spars of the wing, so that it is placed just about on the center of gravity, and that it drives through the use of a long shaft and gear box two oppositely-revolving propellers. This co-axial system of propellers abolishes the old enemy torque, so that the machine is extraordinarily easy to maneuver. As Fritz Koolhoven remarked, Politicians are so maneuverable because their brains are in their centers of gravity instead of in their heads - so why not the same with the airplane?

This model is a perfect reproduction even to the retractable landing gear and oppositely revolving propellers. If it is built carefully to the following plans, the builder will find himself with a model indeed worthy of anyone's collection.

Fuselage: Begin the fuselage by joining together Drawings 1 and 2 ; this will give the accurate layout of the body. The body bulk-heads are cut from 1/32 sheet balsa and are assembled by the use of 1/16 x 1/8 main longerons cut to the shape shown. This structure is later strengthened by adding 1/16 sq strips as shown. The nose is most easily carved and hollowed from two blocks of soft balsa. The leading and trailing edges of the wing stubs are carved from soft blocks to the size shown; these are cemented and faired in very carefully as the wing must join the body in a streamlined intersection.

While we are making the fuselage, we may as well install the retractable landing gear which works efficiently yet simply. The main struts are 3/32 x 5/16 hard balsa, and the other struts are 1/16 x 3/16 and these struts are joined by the use of 1/16 aluminum tubing and .014 wire hinges. Hinges W and Y are cemented in position in the body and wing stub. The placement of the struts and landing gear as a whole is shown by the dotted lines in Drawing 4. Eyelets in struts B and lock-pins form a suitable lock to keep the struts straight at the right time.

The wheel covers are 1/32 sheet material and are cut and hinged as noted. Fillets can best he made by using a solution of balsa sawdust and cement. The shape of the wire axle (.028 wire) is such that the wheels dish out instead of in and that they also are forward of the strut. The wheels are 1-3/8 in diameter.

Before we can really call our fuselage finished, we must put in the motor arrangement for driving the co-axial propellers. Two blocks should be laid out as shown on drawing 5, and right and left-handed propellers are carved as noted in the isometric sketches. Even though the spinner part of the propeller arrangement is carved integral with the respective propellers, it should be carefully finished of and shaped so that when the propellers are put together the contour of the spinnner will be smooth. For scale purposes the individual builder may find it advantageous to cut scale blades from sheet aluminum and insert them into carved spinners. A 1/8 in hole should be drilled in spinner S' to accommodate the tube which is used for driving the forward propeller.

The driving tube for the rear propeller is made from a 1/32 balsa sheet which has been soaked in boiling water and then rolled around a rod of suitable diameter and cemented. Round end plugs P are atttachecl to the tube and this tube is attached to the hollow hearing R TR. Parts H. R and R' are made on .045 brass and part T is cut from brass tubing Vs diameter. The center hole in hanger H is drilled so as to accommodate tube T, and the plates R and R' are drilled to fit the prop shaft.

Assembly of these parts is made thus : solder R to T, slip spinner S' and bearing H on T, placing a set of washers Q behind H. Next solder R' in place and cement to plug P. In the rear end of this assembly, the pin X and washer X' form a free hearing which is attached to the fuselage by means of a cross-piece V which slips through two hangers V' which are cemented to former I..." 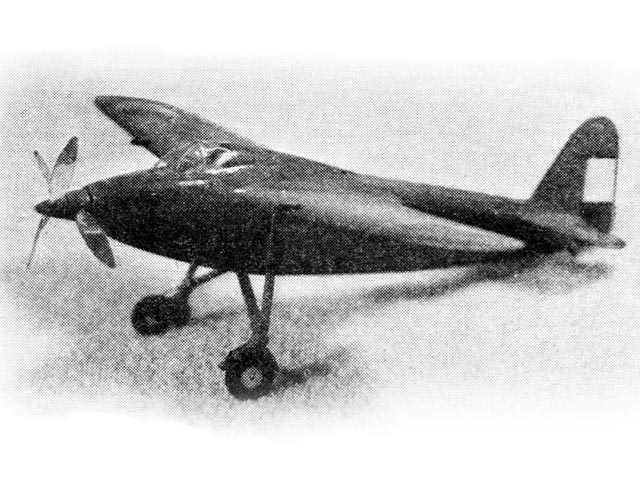 Dear Sir; Thanks very much for bringing out a design I believe I saw in one of my dad's old Popular Mechanics or Mechanics Illustrated magazines. When we would visit Grandpa's house, I would rummage through Dad's old magazines, which he kept from his youth. There were wonderful things to see in them for a five to eight year old. Rainy days were never boring! If I build it, I will send you at least photos.
John Peters - 27/05/2020
Add a comment