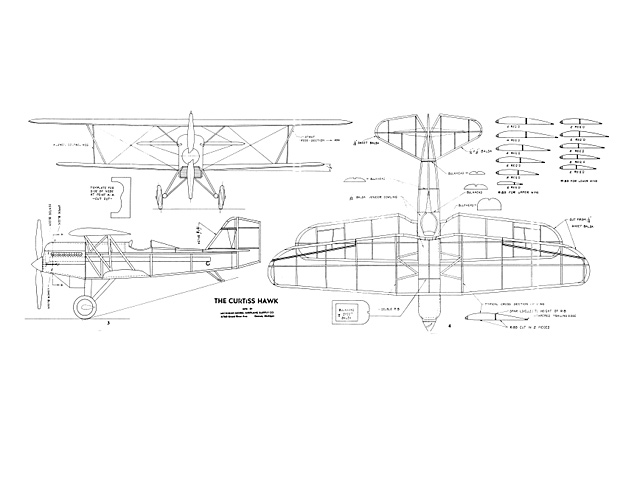 Quote: "The next two come from the Jan/Feb 2002 FACN, issue #203-129. Both come from GHQ files... Next is the Curtiss Hawk by Michigan Model Airplane Supply Co. Neither I nor GHQ, apparently, have heard of this outfit before. Details are a bit sparse, but it appears to show one of those motorsticks that is inserted inoto the model loaded and wound. I dunno. Nose is carved and hollowed out. It appears to have 24 exhaust pipes! Does that imply a 24 cylinder engine? Apparently the designer was not imagining this feature, as a Paul Matt drawing of a similar Curtiss aircraft also has 12 pipes per side. This design is unusual in using split ribs, though I seem to recall the Comet Bellanca Jr. used them as well. However, the spar runs aft of 50 percent in places on this model, unlike the Bellanca. ?)."