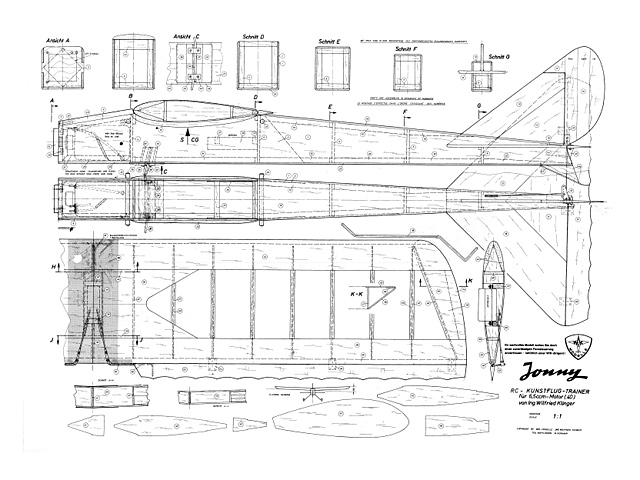 Quote: "A new plan in attachment : Jonny from the defunct German firma Wik Modelle. Span 59in". 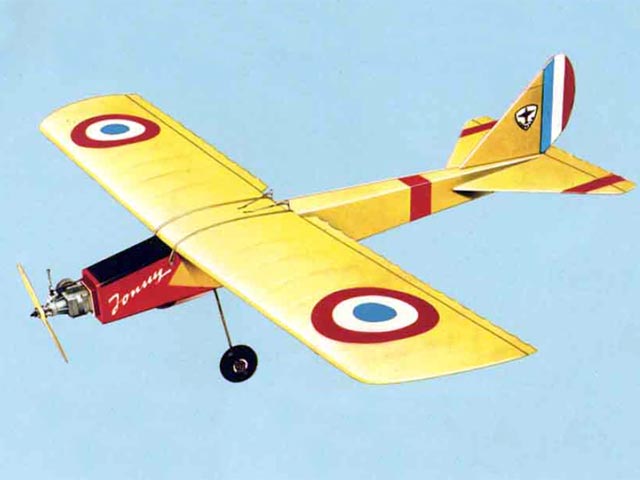 My father told legendary tales of a mythical plane called a 'Jonny'. His old friends to tales of My Old Man doing stupidly fantastic things with this 'Jonny'. He was apparently great at inverted high speed passes, scraping the rudder along the center line of the runway, or flying 4m radius circles around the windsock. Now I never actually believed any of these 'stories' about this plane, having no evidence of a photo or a plan, until one day (while digging through the The Old Dude's stuff), I unearthed in an old box, and inside a nameless, torn rag-of-a-plan. With enthusiasm, I built this plane. When the Old Man saw the thing he went nuts - The Jonny. As a teenager, this plane taught me how to fly. The 1st Jonny had wing dihedral and rounded wing tips, as on the plan, this however, was soon modified. On build 2 I did a a flat 0 degree wing and blunt wing-tips. Later planes had flaps, spoilers (forgive me, I was young and stupid) and cowls. This plane does it all and more. It is the most docile, easy to fly trainer with a slightly forward CG (even on the flat wing), or a raging maniac acrobat with a slightly aft CG and large throws - flat spins are easy. As a family, everybody, my Dad and 2 brothers all got this easy to build plane for Christmas or a birthday over the years. Easy to fix if you crack on a poor landing, or rebuild if something stupid happens (like diving at full throttle and trying to pull up 5m above the ground). With the brushless revolution, a 50mm outrunner and a 6S battery, plug and fly ease is perfected. I have also messed with scale. 600mm, 1600mm, 1800mm and 2400mm wing spans working well. The most common has been the 1600mm with a 46 OS. Lightning. I have always had a Jonny in my hanger, and will always have. This is the ultimate plane. It checks all the boxes for a young inexperienced pilot, or even an old seasoned grump who's seen and flown it all. Oh yeah, There's a new legend going around about some hotshot scraping the rudder along a runway.
DrBryanBotha - 24/05/2013
Bryan, In my last trip to Buenos Aires / Argentina ( 2 weeks ago), I both e old almost complete kit Jonny. Now I am building and I hope to fly it in October. Do you use the wing tips like the original plan or did you modify? Best Regards,
RicardoDSirabonian - 25/08/2014
Hi Ricardo, I used the wingtips on the plan for the first few Jonny's I built At about Jonny 3 I went for flat 90 degree tips. I used 10mm balsa for the tip ribs and sanded them to rounder edges. Two things came out of this modification. The wing was much easier to build; that fiddly wingtip was a thing of the past. I thought the modification would make the Jonny less stable, but there was no real effect that I could detect. My family loved them though. My brother Steven was the first to flat-spin the Jonny, that became a family pastime - climb out - flat-spin to the deck, yank it out and climb again. I think the aeronautical buffs might have something to say, but I like the plain flat tips.
Bryan - 19/07/2015
Greetz again! [more pics 007]
OlafP - 15/02/2018
Add a comment