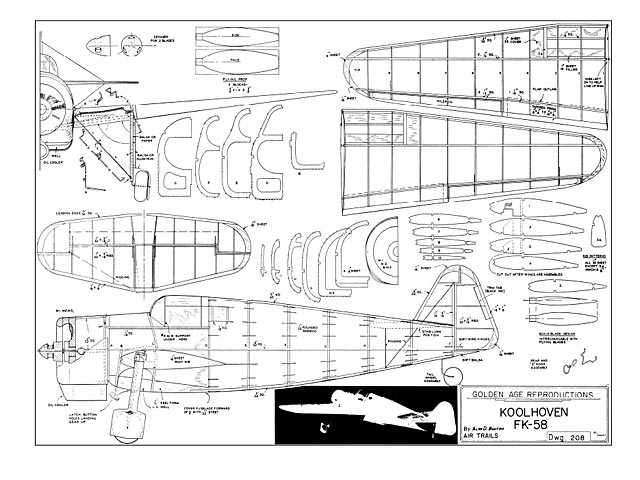 Quote: "THE Koolhoven FK-58 is a new Dutch fighter similar in appearance to many American sport planes, especially the Warner-powered Ryan SC. Four machine guns are carried, two in each wing beyond the landing gear retracting mechanism, and there is a small bay in the fuselage bottom in which light bombs may he carried.

The model is to scale, except for the flying propeller, and duplicates the prototype in miniature as to lightness, speed, and grace.

Fuselage and cowl. Prepare a 6 x 8 in plywood sheet by cementing 1/32 x 2 in sheets together, cross-grained, and let dry several hours under the pressure of books or other weights; then cut out all the formers except those noted.

Only the left side of the fuselage is built on the plan. This includes only the three 3/32 square longerons and the short 1/16 square piece and the formers. Pin the top and bottom longerons and keel form over the drawing (waxed paper between) and cement the formers over their respective stations. Where no longeron is present under a former, block it up the proper distance. (A coat of cement on former C where the bend is to come will probably make the bend just right.) Prebend the mid longeron and cement it in place.

When dry, remove the left half from the board and build the right half up to the same stage directly to the left half, then cover the front with 1/32 sheet as indicated and run the bamboo sliver fairing strips onto the rear. Rubber bands will hold the strips while they are being lined up to the dots on the formers..."

See article file for OCR text of original pages as printed in 1939, including 4 pages of drawings.