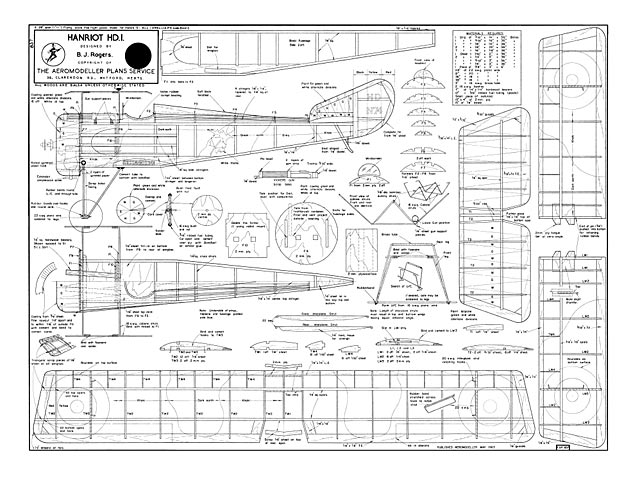 Quote: "WE ARE ALWAYS being asked tor a genuine flying scale model to suit the .5 to .8cc category, which must be simple to build, easy to fly, crash resistant and above all, colourfully realistic.

As our cover shows this month, there is one aeroplane which meets this specification ideally and that is the Belgian fighter of World War - the Hanriot Dupont H.D.I. Featured as our "Aircraft Described", No. 94 by Peter Gray in AEROMODELLER for November 1958, the Hanriot attracted B. J. Rogers into scaling up a 1/12th model for his elderly, but faithful, Elfin .5cc diesel. The subsequent result exceeded all expectations and during the course of a visit to our offices, Mr. Rogers mentioned his model. We were attracted by his description and as a result, he left the model with us for us to make a personal examination and to conduct flight tests.

These were quite exciting, provided one is prepared to forget our struggle with a rather well worn power plant which seemed adamant to operate on anything other than gravity feed. The model flies beautifully and even when we managed to get an unwanted right-hand turn, the only damage in the subsequent prang was a crushed longeron, and that was caused by an over anxious editor and not due to the impact. So here we have something which so many readers have requested and with the bright colour scheme suggested by our cover and on the plan, we fancy there will be a lot of H.D.I models flying this season.

About this colour scheme. It was taken from Jean Noel's drawing in December, 1960, Royal Air Force "Flying Review". No claim was made for any particular pilot using the scheme involving the green and white stripes, however, it is established that the 9th Squadron in which those Aces, Andr6 de Meulemeester and Willy Coppens served, carried a white thistle insignia on the camouflaged fuselage sides. Other colour schemes arc described for Italian and American H.D.I's in our scale plan 2713, available from the editorial offices, to l/72nd and l/48th scale, price 3s. per pack including post. Several H.D.I's are still preserved in Belgium, the U.S.A. and there is also one in the Shuttleworth collection at Old Warden, Biggleswade..."

Quote: "Hi Steve - Here is B.J. Rogers' Hanriot HD 1, a full size plan from Aeromodeller Plans Service, May 1963. The original, badly aged blueprint, was scanned at 600 dpi and brought back for a second life. I will only admit to spending 'more than an hour' on this project as it was a 'labor of love' plan restoration." 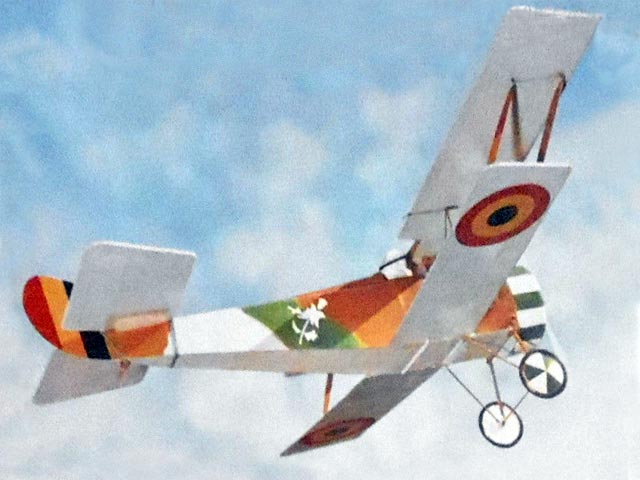