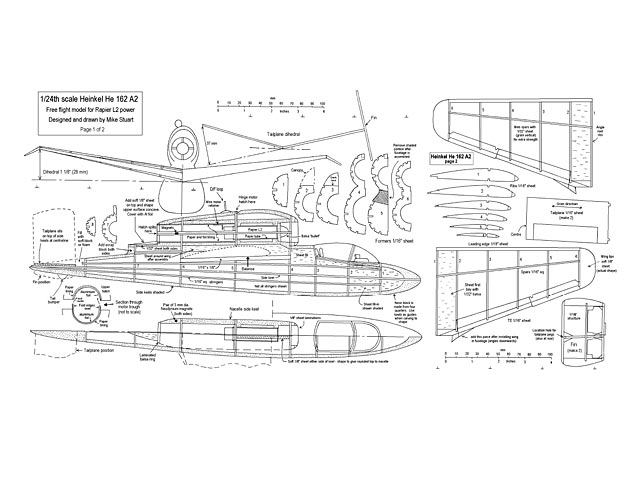 Quote: "I would not recommend this one to a newcomer to scale jets, because it is not a particularly simple build. There are some vague areas on the plan due to some quite complex shapes in the original, especially where the engine nacelle meets the upper fuselage. Be prepared to be a bit creative with small bits of balsa sheet and block to get the required shapes and blends.

Although the plan shows built up fins, they could be made much simpler from soft 1/16 sheet, with little weight penalty.

The wing is assembled as one piece, with dihedral as shown, then inserted through the fuselage. Removing the shaded section from former 5 will be much easier if you partially cut through prior to building the fuselage. Sheeting is added above the wing after it is in place, and combined with the sheeting in the first wing bay, this makes an extremely strong wing root assembly..."

I ended up enlarging the plans a little bit to get a 13” span. I also converted it to rubber [pics 003,004]. One photo shows the way I solved the wing to fuselage to nacelle junction. I used card stock to create a solid wing center section instead of balsa. This became the base for the upper stringers.
Mike McCaffrey - 01/10/2020
Add a comment