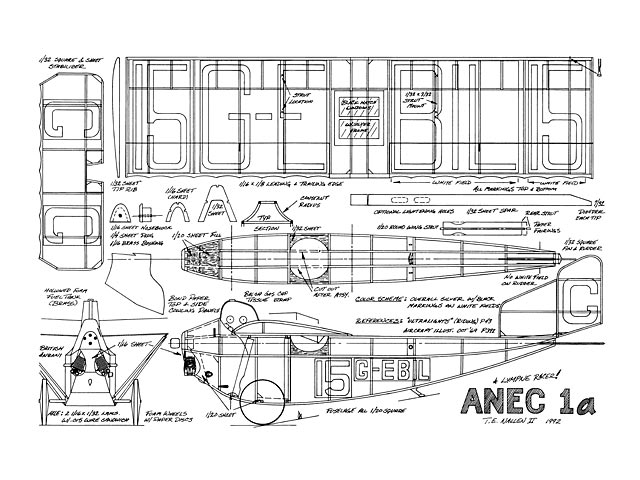 Quote: "The ANEC 1a Lympne Racer, by Tom Nallen. Some of the most fascinating minimum-power aircraft ever designed came as a result of the lightplane trials at Lympne, England in the 1920s. The ANEC series has long been one of our personal favorites, and makes an excellent subject for Peanut Scale.

The ANEC 1a was a clipped-wing racing version al the original 1923 ANEC 1, which had a much longer wing and was little more than a powered glider. More Information on the ANECs as well as many of the other Lympne entries can be found in Richard Riding's excellent book, Ultralights, The Early British Classics, available through Hannan's Runway, PO Box 210, Magalia, CA 95954.

A clattering, high-pitched whine shatters theearly morning calm. Suddenly, through the low fog bursts an incredibly small and squat aeroplane, looking like an overgrown buggy which, because it's sprouted wings, thinks it can fly!

Gathering speed and bouncing on its large makeshift wheels, the little plane zips by. A shadowy figure works frantically beneath the broad wing to get the craft unstuck. Bouncing off one final rise, the pilot hauls the snarling beast off the ground. She clears the trees in a shallow climb, her pilot glancing back over his shoulder and grinning broadly.

The setting for this imaginary vignette is the 1925 lightplane trials at Lympne, England. The odd little aeroplane is the ANEC 1a, the subject of this article. Its predecessor, the ANEC 1, was built in 1923 by theAir Navigation and Engineering Company to compete at Lympne that year. With a wingspan of 32 feet and powered by an inverted 696cc Blackburn V-twin, it won the altitude prize with a flight to 14,400 feet and also tied for the best distance flown on a gallon of fuel - 87.5 miles.

In 1925, with its wings clipped to 18 feet and fitted with a 1,100 cc British Anzani motor for racing, the now ungainly little ship was rechristened the ANEC 1a. She was again piloted at Lympne by the indomtable Jimmy James, who won the speed prize by averaging 83.7 mph over the 50 km course - and yes, he did have problems getting the ship off and back onto the ground!

I thought the ANEC 1 a would make an interesting and competitive Peanut model. My only regret is that I enjoyed her for just a short time. In her second contest, the 1993 FAC Nats in Geneseo, she was lost OOS, narrowly missing a 1st place finish.

CONSTRUCTION: First wet-form the fuselage longerons using a cardboard template to help maintain the fuselage shape, then build the fuselage sides in the conventional manner. This ship has a short nose moment, so use light wood in the attend right from the start. Be sure to add the 1/20 square uprights at the very nose, just forward of the cutout for the dummy engine cylinders. These uprights will be cut away after the fuselage has been completed.

Assemble the fuselage box; make sure everything is square when viewed from all angles. Add the top and bottom sheet fill to the nose and tailskid area. Cement the 1/16 sheet cowling face to the nose crosspieces. Install the two nose formers. The noseplug former should be of hard balsa to withstand constant removal and replacement of the noseblock. Notch the formers and add the three stringers.

The fuselage turtledeck is made by first assembling the 1/20 square turtledeck top frame over the plan. The front of this frame is cemented to the rear of the second nose former; the rear is cemented to the upper longeron ends at the fuse-lage tail post. The sliced 1/20 sheet side formers are cut to size and cemented in place side-to-side, front to rear. I inserted a temporary thin foam profile be-tween the turtledeck top frame and the fuselage box to maintain alignment as the side formers were installed.

Note that all of the side formers have the same constant radius arc. Cut out all of the formers at once, then trim to fit and cement in place. Cement the cockpit sides in place. Complete the turtledeck by carving the hard balsa rear motor peg support to a concave shape; cement this in place and drill it for the 3/32 alumi-num tube motor peg.

Complete the fuselage by cutting away the front uprights, the forward ends of the lower longerons and the nose bottom sheet fill to make the openings for the dummy cylinders. Open up the landing gear sup-port for the faired axle. Make the noseblock as shown, drill the assembly with a few degrees of downthrust and insert the 1/16 brass tube bushing. Bring the noseblock to a snug fit and finish shaping. The entire fuselage can now be fine-sanded and set aside for covering.

I designed the wing with a thick airfoil section to retain this characteristic feature of the original. Sliced rib construction is employed to maintain lightness with the bulky structure. Half-ribs are also used to help maintain the deep airfoil section. I used 1/32 balsa for the sliced ribs but would probably use 1/20 if I did it again, as the thin sheet balsa tends to distort across that broad chord wing - especially if you plan to shrink the tissue covering much! The 1/32 sheet spar is deep and I opted for lightening holes to minimize unnecessary weight..." 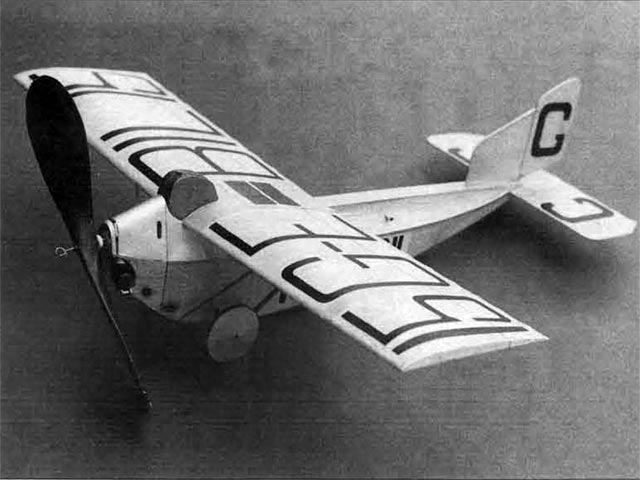