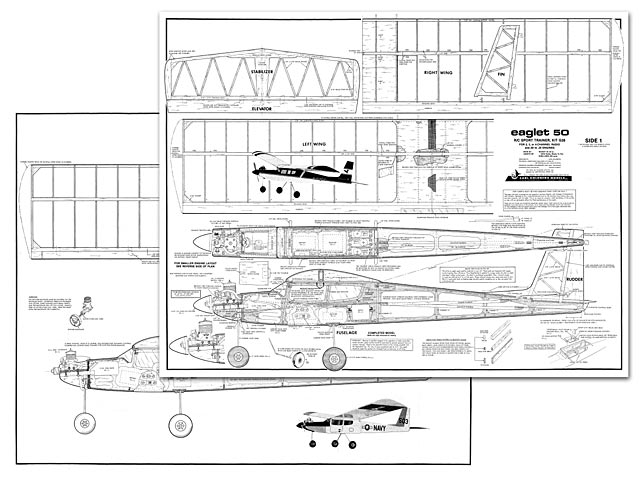 Quote: "Steve, Attached are the files for the Eaglet 50 edubarca is looking for; found a set of plans on eBay not long ago, and finally got 'em scanned. Formers are incomplete, but it's a basic fuselage, and the wing ribs are pretty much the same all the way thru. Parts sheets drawings are in the manual, which is a free PDF download from Great Planes, on their website under Discontinued Kits at greatplanes.com/manuals/discont...."

The Eaglet, designed by Carl Goldberg to include all of the things that make a basic trainer easy to build and fly, comes packed in a light blue box measuring 37-1/2 x 6-1/4 x 2-1/2 inches. The Eaglet was very well-packed with cardboard spacers between the hardware and wood parts. The hardware package was complete to include formed wire gear, bolts and blind nuts, pushrod material, links, horns and more. To give this kit a fair evaluation required the help of a beginning builder and flier.

Construction: One well-drawn plan sheet 35 x 44 in and a thirty-six page instruction manual, which includes about 120 construction photos and a like number of drawings, was packed so you will see them first. The instruction book provides the beginner with a large amount of basic information about tools, adhesives, and construction techniques. The quality of the plans and instructions was matched by the good die-cutting and the way the parts matched the plans.

The fuselage is constructed directly over the plans by installing all the bulkheads and the fuselage top, and bottom and side, then using elastic bands to hold everything together while the whole assembly is checked for correct alignment. Goldberg Super Jet was the quickest and easiest way to glue the fuselage assembly together, while holding everything in alignment. The complete fuselage is constructed of light ply with a key lock feature that ensures a light, strong, and straight fuselage.

The wing assembly goes together as fast and easy as the fuselage. The wing is built over the plans using balsa ribs, bass wood spars, hardwood dowel leading edges, and balsa trailing edge stock. We used Goldberg Super Jet for all wood joints including shear webs and dihedral braces. The method of construction presented in the iristruction book was easy to follow. The wing builds into a very light but strong assembly.

Both vertical and horizontal stabs are built over the plan using 3/16 balsa, 1/8 x 3/16 balsa, die-cut balsa tips, and a balsa center section. We used Goldberg Super Jet to get the job done fast. The rudder and elevator are preshaped and required only light sanding before covering.

Covering: Following a complete sanding, all sub-assemblies were given one coat of Coverite-Balsa Rite and then covered with Top Flite Super MonoKote. To cover the Eaglet, it will take about one roll of covering material and possibly give you a chance to clean out your scrap box. We covered ours with dark blue, red, maroon, yellow, and white. We then used the decals supplied to finish the project.

Engine: An OS Max .20 R/C engine was installed on the hardwood rails using the bolts and nuts supplied. A Sullivan 4 ounce fuel tank, Aero Trend fuel line, Fox filter, 8 x 6 Master Airscrew prop and a Goldberg 2 in spinner completed the engine installation. We would recommend an engine in the .15 range for beginners. The .20 will climb the Eaglet straight up at full throttle.

Radio: There is enough room in the radio compartment to install almost any of the radios on the market today. We used a Futaba FP4FN with S-18 servos. The servos were installed on the Futaba tray and then bolted to rails as far back in the radio compartment as we could get them. The receiver and battery were wrapped in foam and located forward of the servo tray. Goldberg pushrod connectors completed the linkage hook-up.

Flying: The building was fun but the flying was the best part. The Eaglet balanced on the money without any ballast required. With the control travels set as recommended in the instructions, we were ready for the first flight. Half throttle was used for the first take-off and the Eaglet made a nice straight take-off run and a smooth climb out. The only trim required after the first flight was two turns of down elevator. For the remaining flights, we used a Futaba trainer cord so the builder could get some flying time.

The Eaglet is a fun plane to fly and displays the forgiving nature required of a good trainer, when the throttle is kept below 50%. At full throttle, the Eaglet will show you its sporty side. The landing speed is very slow due to the light wing loading, and spot landings are easy to perform with a little practice.

Conclusion: The Eaglet makes a great basic trainer when set up as a three channel airplane, but would be a super fun fly model if you used the optional ailerons. The Eaglet is an easy kit to build and when you add the flight performance, it becomes a very good buy.

The week before we flew our Eaglet, another Eaglet bit the dust, at the local flying field, due to wing failure. To determine if it was caused by a faulty glue joint, or weak spars, we tried to break a wing by diving from altitude with full throttle set and then pull out as hard as we could without pulling the throttle back. Our wing is still in one piece, and we feel that if you follow the instructions to the letter, your's will stay that way also. We strongly advise to re-glue the spar doublers to the spars and when the webs are installed in the wing, go back and re-glue each of them. There has been two additional webs provided that do not show on the plans or booklet. They go in the sixth bay from the tip. This leaves only three bays without shear webs. Good flying!" 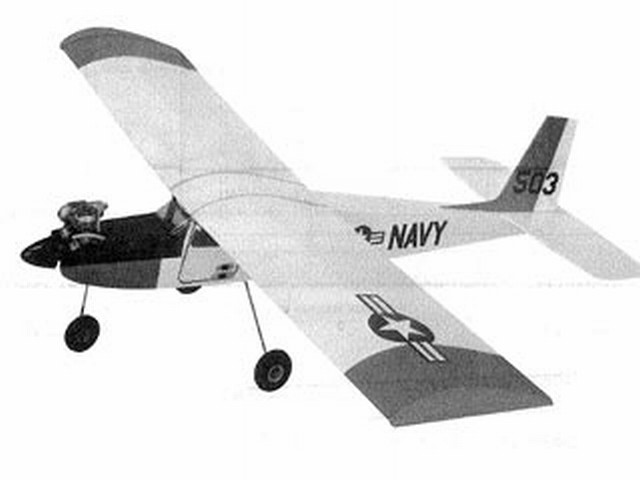 Hi Steve, I built an Eaglet 50 as my first powered plane many years ago. It was easy to build, and I remember the manual as being organized and useful. It might make sense to make the fuselage out of balsa instead of 1/8" ply, unless you can get it laser cut or you have a router and like to use it. A balsa fuselage without the big holes might be slightly quieter, unless one were to use an electric motor with a well balanced prop. The interlocking tab feature worked well, no risk of a banana fuselage. For scratch building it seems like it would be a lot of trouble. On the other hand, when my radio went bad one day the fuselage proved to be pretty durable in a crash. For me, the Eaglet was easy to fly. Prior to that I had only flown light two meter gliders. Because of that experience, I found it MUCH easier to land dead stick than with power. As with many trainers, I'd recommend a low pitch prop and a motor with a low idle. Otherwise the approach path can be shallow, which is a problem inherent in light slow models with glo engines. Obviously not a problem if you use an electric motor. I am skeptical that it would fly ok with the minimum recommended .09 engine. The .20 I used was more than enough, although I doubt if any reasonable choice would actually make it fly very fast. A small 4 stroke would be ideal, though I don't remember how big a prop would have adequate clearance. I'm not sure why they dropped this kit as it's one of those designs that got it right.
Lincoln - 05/04/2013
@Lincoln: Depends on the brand of .09 engine. The Enya .09 would fly the Eaglet on three channels just fine. I am on my 4th Eaglet. This one is powered by a Turnigy 480 850kv, 9x6 Parkzone 9x6 prop (ala Wildcat), and either two 1600 3s packs, or a 2200 3s. That access hatch, in the nose, sure makes quick work of changing batteries! My first Eaglet started out with a belted Speed 600 can motor, and graduated to an AXI 2820. WAY plenty power, with the AXI! Had decent "trainer" performance, with the 600, on 7 round cells.
EverettSimmons - 11/05/2013
Steve, I just wanted to thank you for providing me the original plans for the Carl Goldberg Eaglet. Several years ago I came by a severely damaged Eaglet and because of your plans I was able to completely restore it. She flies great! Here's what I got originally... Here she is, restored [see more pics 005, 006]. She has since flown - more than 10 flights so far, and every one was great. Thanks again for the plans.
DaveW - 19/02/2015
Here are a couple pics of my Eaglet 50 built from a Balsa Workbench short kit and plans from Outerzone [more pics 007, 008]. It's powered by a Magnum .15. The Eaglet was my first RC plane back in 1982. Had a lot of fun building it and it flies great! The hardest part of building the short kit was fabricating the windscreen and side windows. Thanks for a great website!
DavidBeazley - 01/12/2017
Add a comment